With today’s limited, consumerist mentality, Delio said many people actually don’t think the world can get any better. But Delio believes the secret to a brighter future lies in the combination of religious and scientific thought. 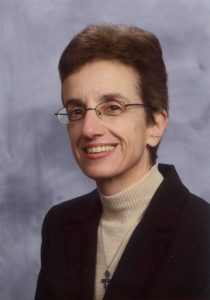 At 2 p.m. August 12 in the Hall of Philosophy, Delio will give a lecture titled “Transhumanism and Transcendence: What Are We Becoming with Our Technologies?” She will address the fast evolution of technology, and argue religion is a necessity when examining the potential futures of humanity. Delio is the Josephine C. Connelly Endowed Chair in Theology at Villanova University and author of 16 books, including 2015’s Making All Things New: Catholicity, Cosmology and Consciousness.

Delio has wanted to be a sister since she was 3 years old. Raised in an Italian Catholic family in New Jersey, Delio attended a Catholic high school, yet she didn’t fit the stereotype of how many would picture a future religious woman.

“I was an upstart in high school. I was always the one pulling pranks, so they never thought that I would ever be a sister,” Delio said. “I’m not sure they ever thought I’d be anything really, but I was always making sure that everyone else was having fun, too.”

Delio’s mother was against her pursuing a religious vocation, because her mother’s sister had a miserable experience during her time in a monastery.

So Delio went on to follow a different passion: science. She earned both a bachelor’s and master’s degree in biology, and later a Ph.D. in pharmacology with a specialization in spinal cord physiology. Delio was offered a post-doctoral fellowship at Johns Hopkins University of Medicine to study the pathology of Lou Gehrig’s disease.

And Delio was going to accept the fellowship — but she didn’t. After reading Thomas Merton’s The Seven Storey Mountain, she felt called again to a religious vocation and decided to pursue the life she’d always imagined as a kid.

Her scientist classmates were shocked and confused, but Delio wasn’t. She wanted to pursue the most radical life possible, and felt that was her next step.

Delio believes a person’s vocation is part of their identity in a similar way as their genes or personality. She described it as a particular God imprint of divine love.

“That imprint is sort of the groundwork or the blueprint for what we are capable of in our lifetime, and what we call vocation, I think, is coming to our own self-identity, sort of waking up to that inner reality that [our] life has meaning or is created for something,” Delio said. “And you know, in my case, it was the sense of being deeply drawn to God: That God was my call.”

But the start of Delio’s life as a sister did not conclude her love of science. Delio will always love science and said being in the field actually deepened her faith.

“I just thought that the brain is the most incredible, finely tuned [organ]. I mean, who could possibly invent the brain?” Delio said. “So I just felt that science alone didn’t answer the deepest question of ‘Why?’ Why are we so incredibly fine-tuned for creativity, for intelligence?”

Delio went on two examine those questions while working as a senior research fellow at Woodstock Theological Center from 2009 to 2013. One of her colleagues developed an interest in transhumanism, which led to a yearlong project on the subject. Their research examined the question: “What’s happening to the human person with technology today?”

Delio said to be human is to have the freedom and creativity to transcend ourselves — the capacity to create and go beyond in a way that the rest of nature does not.

“I think the human person has the capacity for the infinite, and technology in some ways reflects that capacity, but it can’t replace it,” Delio said. “That’s why I think this capacity to transcend ourselves toward the infinite is deeply human and needs to be nurtured and cherished, because the actual infinite is God.”

That understanding of God as the “actual infinite” is why Delio argues religion should play a vital role in the conversation about transhumanism. She said, “God does makes things to make themselves,” which is why God should be included in the self-making process that’s written within human nature.

“When we exclude God from this whole process, we exclude meaning and purpose in a larger way,” Delio said. “If we cut God out of the whole process of techno evolution, then we are left in a sense with our own inventions, which makes us very vulnerable to our own creativities, and that can be quite scary.”

But Delio is still hopeful about the ways that technology can help make the world better, and move toward a world “that’s grounded in love.”

“I really do believe this world can become a more unified world, a more just world — I really do think that we can move to a new level of existence,” Delio said. “But within a larger context, I would say, of a world that’s grounded in love. … I think religion needs to work with science and science needs to work with religion for the sake of the whole Earth, the whole cosmos and the whole humanity.”