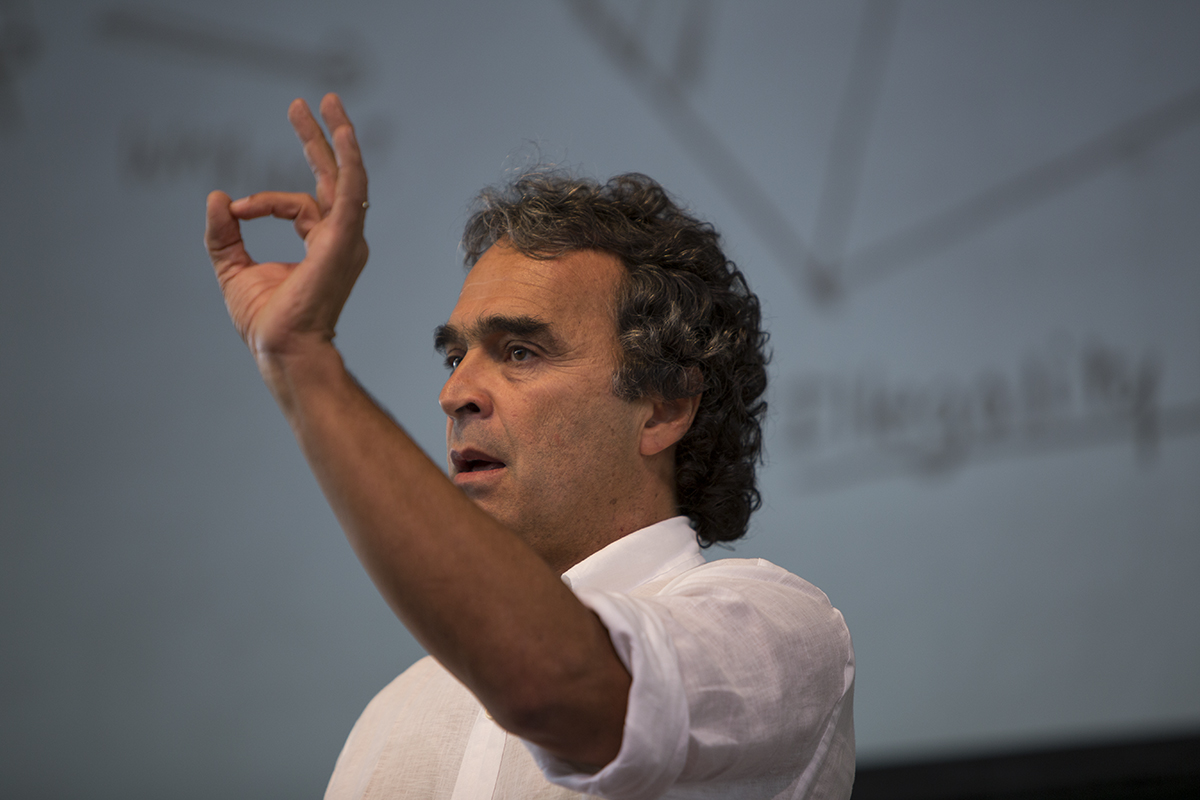 Sergio Fajardo never saw himself as a politician. He went to school to study mathematics with the goal of becoming a professor. Fajardo lived in a Colombian city considered the most dangerous in the world: Medellín.

Many citizens were asking and hoping for change, but nothing ever came out of those wishful thoughts. Fajardo became sick of the cycle — destruction led to wanting change, which led to promises of hope and resulted in nothing.

In 2004, Fajardo became mayor of Medellín, where he is credited for the transformation of the city. In 2012, he became governor of Antioquia, a post he held until 2015. Fajardo entered the world of politics knowing that as a politician, he would have the power to enact change, and that’s what he did.

Fajardo spoke about the transformation of Medellín and other Antioquian cities during the Tuesday morning lecture in the Amphitheater. Former Colombia ambassador to the United States Carolina Barco joined Fajardo as an interviewer and speaker.

“We realized that when we said, ‘This should be done,’ we were talking to a very particular group of persons in our society: politicians,” Fajardo said. “Politicians are the ones who make the most important decisions regardless of the fact if we like them or not.”

Barco said the population in Colombia has grown by 7 percent every year since the 1960s. Within 11 years the population doubled in size, making it vulnerable to corruption and violence.

Fajardo, along with a small group of supporters, decided they needed to play a larger role in the political process. It became the group’s goal to elect Fajardo as mayor of Medellín.

“We were willing and ready to change the history of our city,” Fajardo said. “We wanted to be empowered to lead the transformation of our society.”

Fajardo and his team wanted to target the three most pressing issues in Medellín: inequality, violence and corruption. Unlike other politicians, Fajardo wanted to build on legality and transparency to create a more trusting society.

“The main capital that we have is trust,” Fajardo said. “We have kept the same principles from day one, and that way when we established a relationship to people, they say, ‘We trust you.’ That’s the most valuable asset that a politician could have in order to transform a society.”

Community, Fajardo said, is one of the most important aspects of running a successful and prosperous city. A politician must listen to the needs and the desires of the community.

“We brought in hope, and we showed them we can do as much as we want to do when we were following this path,” Fajardo said.

Opportunity is not prevalent in a largely corrupt community like Medellín, Fajardo said. He wanted to tear down the walls of inequality preventing underprivileged young adults from reaching those opportunities.

“There are some people who want to build walls these days,” Fajardo said. “We want to tear them down and open doors to opportunity.”

Fajardo planned to present opportunities to the citizens of Medellín by focusing on education and transforming the damaged buildings into architecturally beautiful schools and libraries. He saw education as the best tool to fight inequality. Fajardo could not accept the conditions of the education systems in the poorer neighborhoods of his city. As mayor, he wanted to present all citizens with equal opportunity to become successful.

“Every place is a symbol, is an expression of hope, but it carries in there what we want to have for people: the ability to develop their capabilities,” Fajardo said. “That’s what education is all about.”

A member of the audience asked Barco to speak about the war on drugs and how it is affecting Colombia. Barco said Colombia used to produce the drugs while the United States consumed them, but now Colombia has become a consumer as well. She said the U.S.’s initiative Plan Colombia is “changing the wave” and combating drug cartels in the country.

“We have to work on prevention,” Barco said. “We have to work with people who have a problem. We have to look at different ways of addressing these issues. Now I think we all have to sit down and keep on working on this issue. This is an issue that involves all of us, and we’re all responsible.”

Fajardo said the upcoming U.S. presidential election will have global impacts. He emphasized the importance of electing good leaders who will work with the community and the country to resolve issues and continue economic growth.

“I tell people, ‘Look at what is happening in the United States,’ ” Fajardo said. “You have an election this year, and, whichever result comes out of it, this is going to be a very different society.”

To Fajardo, good leaders are what allow a city or a nation to “withstand the hurricanes.” For Medellín, those hurricanes were violence and a clear divide that created inequality. Before Fajardo became mayor, there were more than 350 homicides per 100,000 people in the city. Today, that figure has been reduced by 95 percent.