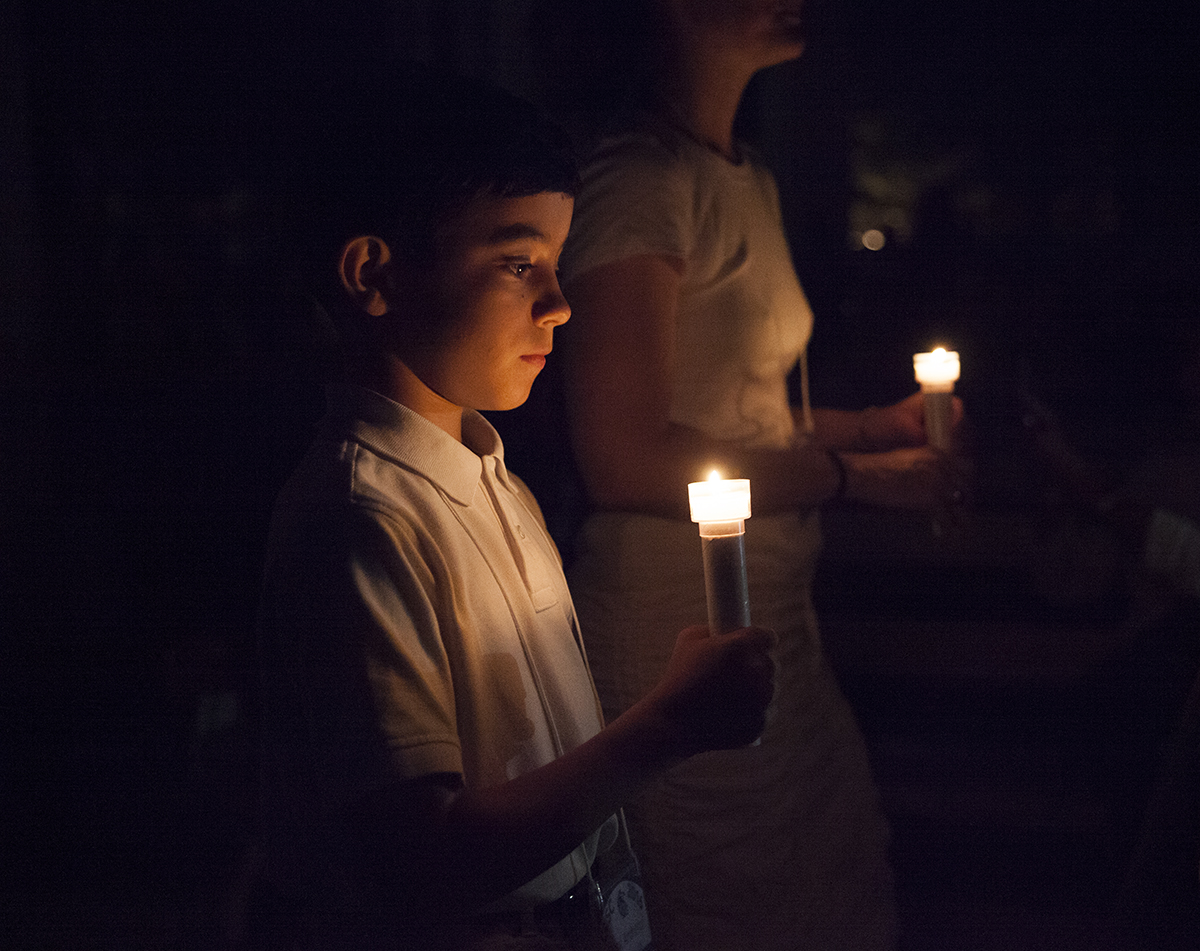 Recognition Day for the Chautauqua Literary and Scientific Circle traditionally happens on Wednesday, but the celebration actually begins the Sunday before, with the Vigil in the Hall of Philosophy.

The graduates proceed from the Literary Arts Center at Alumni Hall to the Hall of Philosophy, clad in white and bearing candles. Speakers offer remarks on what the CLSC represents. This year’s vigil also featured performances by the vocal quartet No Quarter.

The graduating class selects an honoree to speak at the vigil, and this year’s speaker was John Steere, president of the CLSC Class of 2015.

In his remarks, he emphasized the importance of listening to others’ stories and the role the CLSC had in reshaping his life.

Steere said for many years, he sat on the sidelines of the CLSC, never thinking he’d become a part of it. But when his life was turned upside down by a divorce, he said, Chautauqua and the CLSC became key parts in his healing process.

“For that Chautauqua season, all I did was sit on my porch, reading and listening to the stories from the CLSC historic book list,” Steere said. “The pages and texts of those books I read during that difficult summer became the path to my new life.”

The Vigil serves as a precursor to today’s Recognition Day celebration, which honors four years of reading for the Class of 2016 CLSC graduates. This year’s class, which is the 135th, has 138 members.

Recognition Day starts early for graduates with a class photo at 8:10 a.m. July 3 at the Hall of Christ. From there, the graduates march to the Hall of Philosophy, where they meet up with the parade of past CLSC graduates who march through Bestor Plaza.

The graduates are welcomed at a golden gate by actors portraying Chautauqua founders John Heyl Vincent and Lewis Miller. They open the gate with a key inscribed with the word “read,” and the graduates pass through to the Hall of Philosophy to receive their diplomas.

After receiving their diplomas, the graduates then march to the Amphitheater, where they’re recognized with their class banner. The Class of 2016 chose “Cultivate Curiosity and Wonder” as its class motto.

Many of the Recognition Day festivities are organized by Jeff Miller, CLSC activities coordinator. This is Miller’s last year in the position, after 21 years of service.

“It feels good,” Miller said. “It’s a lot of organization, so that part I don’t look forward to. But it’s hard not to get a bit nostalgic, having been one of the people running this for decades.”

Miller said when he initially took the position of activities coordinator, he felt like the CLSC was dying down a bit. He said getting to see its resurgence during his years in the position has been great, because the CLSC represents what he loves about Chautauqua.

“People read books, and those are some of the deepest-thinking people in the world, as far as I’m concerned,” Miller said.

And it’s the people that he’ll miss the most, Miller said.

“I love the books and the authors and the people,” Miller said. “It’s a people job.”

All of the Recognition Day activities are meant to honor the CLSC’s role in the mission of Chautauqua. It also shows that everyone can be a part of an event that honors the CLSC’s 138-year history as well as the future, Miller said.

“We do try to have a foot in the past as we’re moving very progressively into the future,” Miller said.

Miller said the CLSC was one of the key elements that made Chautauqua influential and national in its reach, and Recognition Day is a great way to celebrate it.

“It really is one of the brainchildren that Vincent and Miller had to make it the place it is,” Miller said. “It wouldn’t be anything like it is today if it wasn’t for the CLSC.”