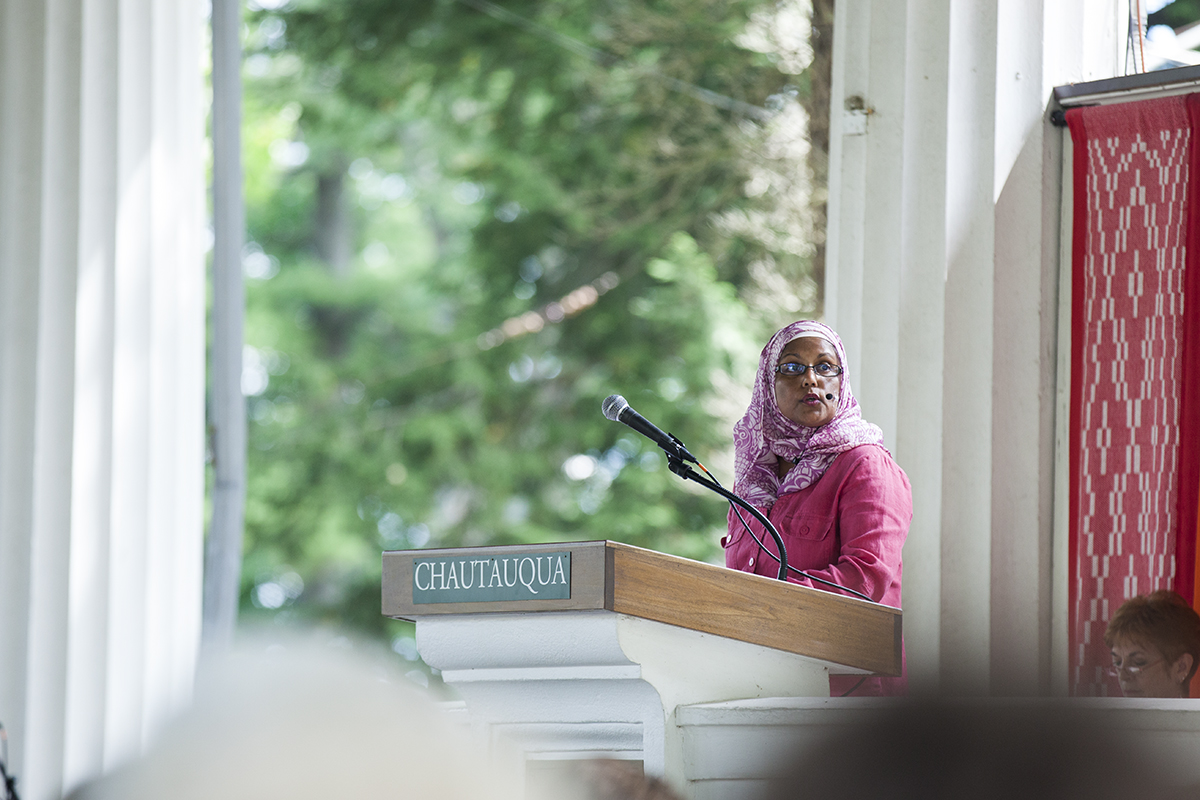 Veteran Shareda Hosein was sitting in her first class to become a Muslim chaplain when she learned terrorists had flown two planes into the Twin Towers. After two decades of service, she said knew immediately there would be war. She hadn’t expected what came next.

Four days after the terror attack, a 49-year-old Sikh man was murdered outside a gas station in Mesa, Arizona. He was mistaken for a Muslim man. The seminary gathered all the Muslim women that afternoon and told them they would run any errands for them so they could avoid the dangerous task of walking outside.

“It was the first time I felt fear in the U.S.,” said Hosein, now a retired lieutenant colonel in the U.S. Army Reserve.

In the Hall of Philosophy Thursday afternoon, Hosein explored the moral wounds she suffered in the aftermath of the Sept. 11 attack, as she saw the country she served turn against her and, in gruesome displays of immorality, betray both Islamic and American values.

In January 2008, The Washington Post Magazine published a nearly 4,500-word feature on Hosein titled “Soldier of Faith.” The story of a young immigrant coming to America, rising to the army, working her way through college and finally finding her faith is almost quintessentially American. It shows her struggle to become the Army’s first female Muslim chaplain and ends ambiguously with her praying barefoot in the back of the Tufts Interfaith Room, having been asked not to lead services because she’s a woman.

On Thursday, she was markedly less ambiguous.

She described the fear and despair she and other Muslims felt after 9/11 as the FBI placed surveillance on Muslim communities. Legalized under the Patriot Act, Hosein said, it was a modern, cyber form of Japanese internment. Friends’ bank accounts were frozen and some lost their companies and government contracts.

“Months after 9/11, I felt even more hopeless,” Hosein said. “Why bother for one’s future, because the government could easily take it away through the Patriot Act?”

Fear turned to disgrace when Hosein deployed to Kuwait in 2004 and CBS News published photos from the Abu Ghraib prison. The photographs, which provoked widespread condemnation and outrage globally and from within the United States, showed U.S. soldiers humiliating and torturing Iraqi prisoners. Hosein avoided the news and refused to look at the pictures.

“I felt those men were dishonored as prisoners.” Hosein said. “How could I hold my head up high as officer defending United States because we just violated the Geneva Conventions?”

She soon learned of the high rate of sexual assault in the military and was told to watch her words and only walk around the base with a friend. She said she felt her colleagues thought she was a traitor, particularly when she argued the United States did not have enough evidence for the existence of weapons of mass destruction to invade Iraq.

Hosein began to go through a personal jihad, though not the kind that has become familiar to the Western world. Jihad has two meanings, she said. The one most commonly known is a physical war, but the word also refers to an internal struggle to survive.

And for 12 years after 9/11, surviving was an arduous task for Hosein. She said she would have took her life if her faith did not prohibit it.

“I’ve been living life going through motions,” Hosein said. “I didn’t smile much. Anger and sadness filled my soul.”

She only started to heal in 2013 when she joined the National Advisory Board for Brite Divinity School’s Soul Repair Center, and realized that she had wanted to kill herself because she had committed a different form of suicide.

“Moral injury results when military personnel or civilians violate core personal beliefs and in evaluating their behavior, they feel they no longer live in valuable, meaningful world and can no longer be regarded as decent human beings,” she said, choking up. “To violate your conscience is like committing moral suicide.”

The condition is part of the reason suicide among young veterans has spiked 44 percent in recent years, she said.

Hosein started writing and reflecting on her time in the military and her opinions of the wars in Iraq and Afghanistan as a means of recuperating. She shared many of them Thursday.

For one, she said, Osama bin Laden did not actually have legitimate authority to declare Jihad. Only a state can declare Jihad, Hosein said, and it must be openly declared before any attack is made and it must be a war of self-defense. Bin Laden and the 9/11 attacks fit none of those criteria. The distinction is important, Hosein said, because part of the rationale for invading Afghanistan was that bin Laden had declared war on the United States and wasn’t just some terrorist thug.

“If bin Laden had been tried in an Islamic court, the verdict would easily have been guilty,” Hosein said.

Founded as a predominantly Christian nation, Hosein said, the United States did not adhere to its religious values for warfare either. Christian just-war theory holds that nations should exhaust all other avenues for resolution before turning to armed conflict. But even as the Taliban offered bin Laden up for trial, the United States continued bombing Afghanistan. (The Taliban initially offered to try him in an Islamic court, and proposed extradition to a third party for trial if the United States stopped the bombing of Afghanistan and could provide evidence that he was behind the attacks. President George W. Bush rejected both.)

Bin Laden also did not engage in what Muhammad the Prophet had called the more important jihad: the struggle to keep your soul on the right path. If leaders both in the Muslim world and the West followed this path, Hosein said, perhaps they would have spoken up against injustice and some of the cataclysms and the hate of the last 15 years could have been avoided. Future ones still can.

“Striving for greater jihad is what we all need to practice,” Hosein said.