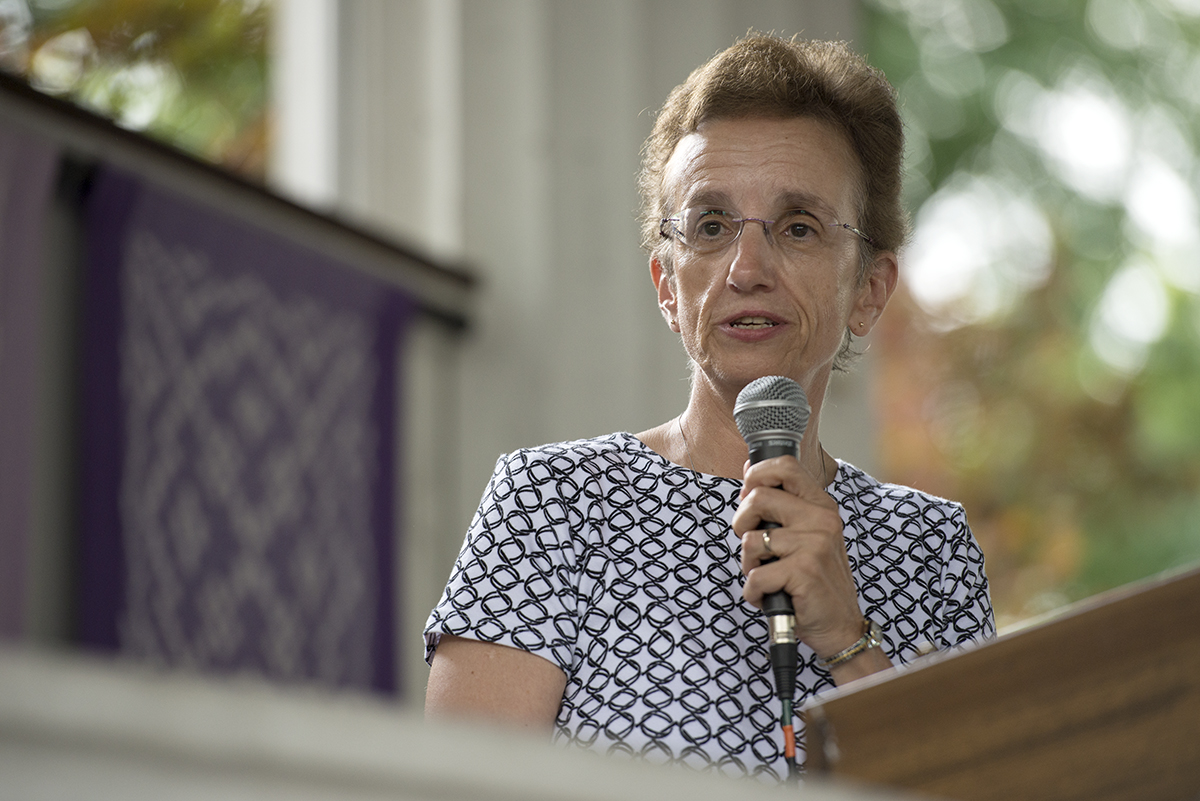 Welcome to the cyborg age, and if you count yourself among the world’s 2.2 billion Christians, the cyborg religion.

Reading glasses? Cyborg-eyes. Spacesuits with oxygen packs? Cyborg-enabled exploration. Pacemakers and heart transplants? Cyborg medicine. A faith in which the savior is a hybridization of divinity and humanity? Cyborgian religion.

“This blending of divinity and humanity is what the fullness of Christ will be: neither male or female, everyone free,” said Sr. Ilia Delio, OSF Friday in the Hall of Philosophy. “So in a sense, Christianity is a cyborgian religion in the broadest sense possible, but don’t tell the Vatican that.”

After a week of speakers predicting technology will soon bring humanity to a new age of transcendence, Delio, who earned a doctorate in pharmacology before joining the order, argued that innovations that merged man and machine are already making parts of that dream a reality. But Delio, co-author of Humanity on the Threshold: Religious Perspectives on Transhumanism, warned if that technological revolution continued without the guidance of religion, it would sink humanity into an era of meaninglessness

“The unreflected cyber life may not be worth living,” said Delio, paraphrasing Socrates. “So I do think it is important to bring technology and transhumanism into a wider context and a wider conversation.”

The word “cyborg” tends to connote science fiction creations, and transhumanists often invoke the term to describe their vision of the future “singularity,” in which man becomes one with machine, but Delio said the word was coined by early NASA scientists describing the oxygen-carrying spacesuits astronauts would have to wear.

In the half-century since, humanity and science have undergone a radical transformation. Where there was once an unbridgeable divide between technology and the human, Delio said, now the two blend seamlessly. Even the cellphone has become an extension of self, Delio said; it’s a manifestation of identity for the millennial generation. As humanity continues the process of “cyborgization,” humans will become less and less recognizable.

“Cyborg signals end of autonomous self, the self that’s bounded, that’s constrained by gender or ethnicity, and the cyborg speaks to us of a more protean self, a self that’s permeable, that can blend in a sense with other things,” Delio said. “So here’s what ‘cyborg’ tells us: What counts as human is not and should not be self-evident.”

Post-racial and post-gender, the vision is positively utopian. And yet, Delio warned, humanity is currently on a crash-course toward dystopia, a world in which one can sit at a computer all day, connected to the entire world, and when someone knocks on the door, say, “What do you want?” It’s a world in which people bump into trees because they’re relentlessly checking their email, and form relationships on the virtual platform “Second Life” while never speaking to people face-to-face.

When friendships can be terminated with a click of button on Facebook, the world loses the ambiguity and forgiveness that makes life human. At least one study has linked heavy cellphone and computer use to sleep disorders, high levels of stress and depression, among other mental health disorders.

“Are we actually being drawn together [with technology] or are we becoming more isolated and lonely?” Delio said.

To navigate those cybernetic waters, Delio turned to early 20th-century Jesuit priest and philosopher Pierre Teilhard de Chardin. He was enthralled by the coming computer age and drew up theologies to bring it in concert with his Catholic faith.

A friend of Julian Huxley, the geneticist who coined the term “transhumanism,” Teilhard de Chardin foresaw the computer’s transformative power. He theorized a three-tiered history of the universe: cosmogenesis, or universe creation; which gave way to biogenesis, or life creation; which will finally give way to noogenesis, or the birthing of mind.

The latter will be accomplished through technology, but in Teilhard de Chardin’s mind, it also differs from the earlier revolutions in one other key aspect. Where biogenesis — evolution — progressed through competition and natural selection, noogenesis will progress through a computer-enabled unification.

Teilhard de Chardin places God at the center of that process. He calls him “the Omega” from which all love and consciousness arises. Technology will lead to new forms of the sacred, Delio said, but whatever form it takes, spirituality has to be present in the next stage of evolution. Right now people have developed a hyper-organized left brain, but they’ve neglected the spiritual right brain, Delio said, and if they continue to ignore it, humans may extend their lives while draining its meaning.

“Knowledge can get us to new places, but love brings us [to the] threshold of another universe,” Delio said.