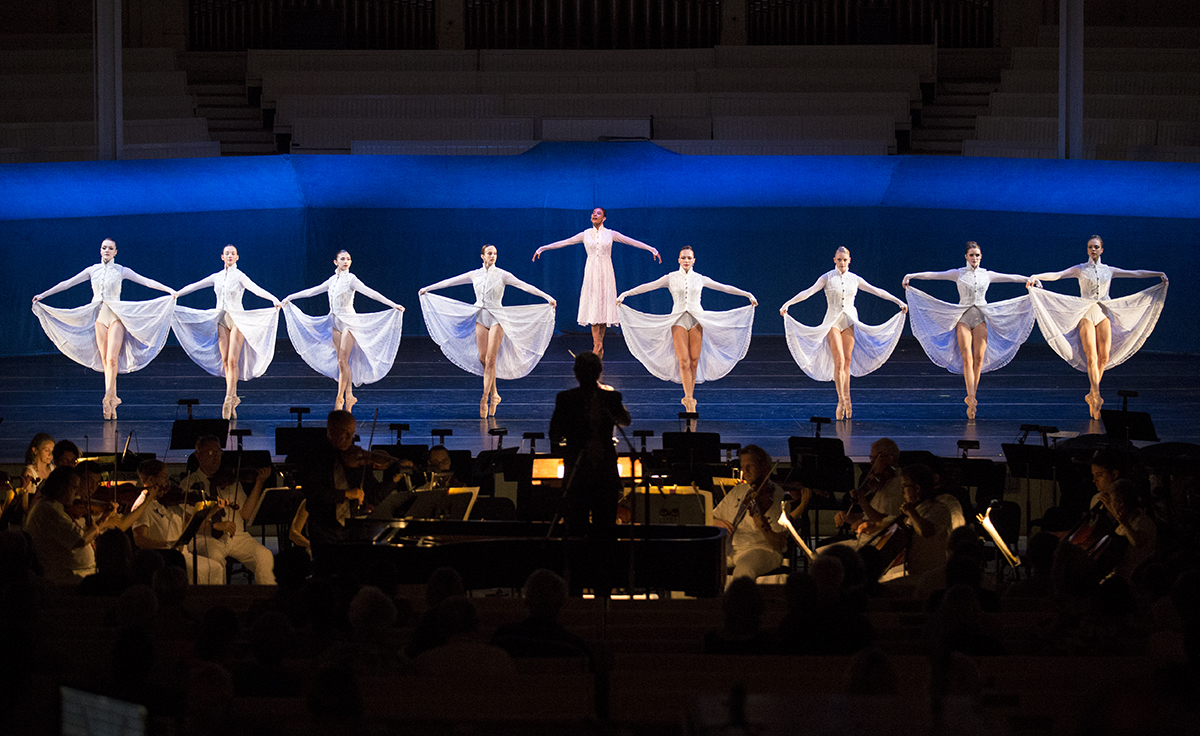 The idea of transition laced its way through the Charlotte Ballet’s final performance in the Amphitheater, a 123-year old structure that is scheduled for reconstruction this winter, only, most hope, to re-emerge as the heartbeat of Chautauqua. Technically, the evening also celebrated Jean-Pierre Bonnefoux’s official retirement from Charlotte Ballet, although he will be back to oversee the company’s stay in Chautauqua next summer in order to allow the ballet’s new artistic director, Hope Muir, time to transition into her job.

The evening reflected Bonnefoux’s ingenious way of providing a constantly changing array of contemporary and thought-provoking programming on a tight budget, mostly by using his small stable of resident choreographers, Mark Diamond and Sasha Janes, along with the wily stagings of George Balanchine masterpieces by his wife and associate director, Kennedy Center honoree Patricia McBride.

In this particular edition, the always-welcome annual finale with the Chautauqua Symphony Orchestra under the direction of Grant Cooper, had a particularly robust and varied musical accompaniment that provided some of the strongest challenges the musicians have experienced over the years.

It began with Diamond’s Reflections (of a Life), which used the epic sweep of Gustav Holst’s “The Planets” to good internal effect in a ballet psychodrama.

The initial image featured Ball James in a chair, covered with lighting similar to prison bars. She was restless, searching for a meaning to life, perhaps, and haunted by some inexplicable problem.

Diamond carefully wove in the intensity of the relationships, something Ball James deeply felt and enhanced with her dramatic talents. Surprisingly, the Holst score, despite its space age inspiration, was utilized by Diamond to good effect.

Although transition is currently a key word in Chautauqua, McBride’s expertise has delivered a treasure trove of Balanchine works to audiences here, providing what might be termed a stabilizing force.

The latest, “Rubies,” is the most popular gem (the others being “Emeralds” and “Diamonds”) in the full-length abstract ballet Jewels.

Set to the complex rhythms and syncopations of Igor Stravinsky’s score, it contains matching angles and lines in the choreography — arms askew, hips thrusting.

It was hard not to notice Balanchine’s humor — twisting chorus-line walks, percussive stomps en pointe, cakewalks and skipping rope — that peppered the work.

Through it all, Ball James was a sophisticated jazz baby, toying with the music and flirting with her partner, Alexander Peters, a Pennsylvania Ballet principal dancer who stepped in on two days’ notice when Charlotte Ballet dancer Josh Hall broke his foot.

Despite not having performed the role for two years, he, like Lapointe, a tall soloist who was seemingly unlimited of limb, gained confidence as the piece progressed. Kudos also to piano soloist Nataliya Pinelis at the front of it all and the chorus line of dancers literally percolating at the back, so precise and present despite the difficult score.

The program ended with the ultimate transition we all experience every year, Four Seasons, choreographed by Janes and inspired by Antonio Vivaldi’s familiar composition.

There is so much inherent in the piece, even though it is played only by strings and harpsichord, along with a virtuosic violin solo, rendered here with considerable authority by Brian Reagin. Supposedly connected to four sonnets, it passed through the vagaries of weather — thunderstorms, snow — and nature — dogs barking, birds singing.

Janes did not get overly explicit with those natural phenomena and chose to translate them loosely into movement, with a dash of emotion such as charming kisses to punctuate. So the lovely opening duo in “Spring” was performed with youthful tenderness by Hayes Harkins and Janes (subbing for Hall) and the inherent energy of “Summer” was marked by an exuberant trio of men, led by a bounding Ryo Suzuki.

In the festival setting, the seasons were primarily defined by the costumes as well: a 3-D floral design for “Spring,” short purple skirts and pants for “Summer” and a striking orange spice for “Autumn.” Unfortunately, the women had to manipulate long stiff skirts, which culminated in a cozy wrap for the various couples during that “Autumn” section. But they generally interfered with the usual flow of Janes’ choreography as the women repeatedly put them on and took them off.

On the other hand, the “Winter” cast was clothed in wonderful long white coats, which added to the visual impact of the choreography. It opened with Raven Barkley’s slow, dignified walk up from the orchestra area, worthy of a runway.

After an expressive solo from Juwan Alston, the women emerged onto the stage with a series of bourrees, then opened and closed their coats in waves of motion that resembled snow drifts.

Later, when the men entered, the cast of 19 turned like a swirling snowstorm in a cycle of nature that can be both beautiful and blustery and one that dominated the Four Seasons.