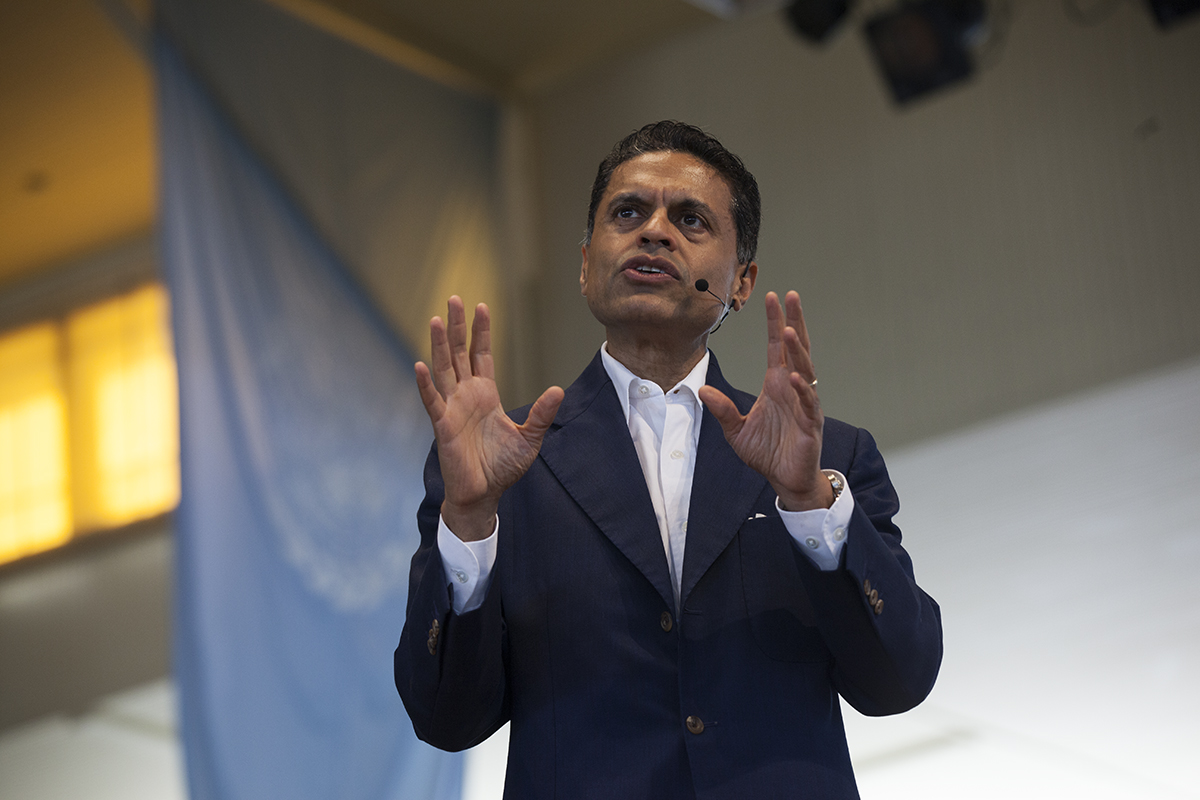 Fareed Zakaria, host of “Fareed Zakaria GPS” on CNN, discussed that link and how the global economy and digital world impacts jobs in the United States during the 10:45 a.m. Tuesday morning lecture in the Amphitheater.

“Something happened in the early 1990s that broke the link between America’s economy and its jobs,” Zakaria said. “The two had generally progressed in tandem. That, it seems to me, is the central dilemma that we face in the United States right now.”

As the economy improves, few jobs are generated, and many of those jobs have low-paying wages. Zakaria said that economic impact was created by two revolutions: the creation of a single global economy and the digitization of the world.

When the Berlin Wall came down in 1989, the effects were felt around the world as the rule of communism came to an end. Many countries made the transition to democratic governments, and 45 African countries held elections for the first time.

“Things are changing everywhere, but the most important change is that the global economy is becoming one single economy,” Zakaria said.

Importing goods into the United States became a common reality for Americans, and, as a result, many jobs were no longer considered productive. It was cheaper for the U.S. to import goods from countries like India, China and Vietnam where the workers were paid one-tenth of what workers in America would be paid for the same product.

“That reality got dramatically accelerated by the creation of a single global system,” Zakaria said. “It did produce an enormous benefit, which was that the goods got dramatically cheaper.”

Many jobs that required little education and few skill sets were eliminated because it was no longer economical to produce certain products in the U.S. As more items were produced and purchased outside of the U.S., manual-labor jobs became hard to obtain and maintain.

Zakaria used an aluminum plant as an example of the impact of the information revolution. Thermostat control, quality control mechanisms and conveyor belts, which were previously run by individuals, were now run by computer software. The digital takeover produces higher-quality aluminum in a short span of time.

When Zakaria asked a CEO about the workers who formerly did those jobs, the owner replied the workers were now just in the way of production. They were no longer needed to produce aluminum.

“That is the illustration of a phenomenon that has been going on now for 20 to 25 years, which is the digitization of, really, life,” Zakaria said. “What you’ve begun to see is those things that were mechanical, even that required skills, were increasingly being done by information. That reality is now beginning to have a new and more accelerated application because three different technological revolutions are taking place at the same time.”

Those simultaneous revolutions: the supercomputer revolution, the cloud computing revolution and the mobile revolution.

Many individuals are directly impacted by all three due to the continued advancement of smartphones. Zakaria said individuals are engaging in all three of those revolutions when they send an email, order something from Amazon or surf the web.

Smartphones have become so powerful, they contain more advanced technologies than the most powerful supercomputer in the world during the 1980s. The newest smartphones, such as the iPhone 6s or the Samsung Galaxy 7, contain 100 times more computing power than all of NASA when they sent astronaut Neil Armstrong to the moon.

Computers are now able to do more than just simple mechanical tasks. They are able to calculate intellectual skills as well. For example, IBM created a computer called Deep Blue to play chess. Deep Blue played chess grandmaster Garry Kasparov, beating him six times in May 1997.

With the growth of technology, the economic activity that comes with it is being generated by a small group of people, which Zakaria said is a huge challenge. He said he cannot think of a solution that does not include some type of redistribution whether it is redistribution of opportunity, health care or income.

Despite the uncertain future the information revolution and global economy are leading to, Zakaria said there are positive aspects to technology doing basic or monotonous tasks.

“One of the things I think it will do is to liberate human beings to be truly human,” he said. “We spent a lot of our time over the last few thousand years doing stuff we didn’t want to do.”

Zakaria said it is because of the industrial revolution that people spent 40 to 50 years doing the same task at the same corporation in the same industry. He believes the technological revolution forces individuals to look into the human qualities that set us apart from machines.

Pilots are an example of what human assistance can do for other individuals. Zakaria said many times pilots are not flying the planes, but are relying on autopilot. He said the Federal Aviation Administration even requires autopilot to be on during certain situations because the plane’s sensors and radars can detect things humans cannot.

Zakaria said people would not get on planes knowing there was no pilot on board. It plays the role of “psychological assurance” to people. Doctors would play a similar role in the medical field if supercomputers were to take over tasks such as diagnosing and treatment planning.

“What if that stuff is something the computer can do, and what the doctor really has to do is he has to be your human coach, your life coach, the person who helps you get through this extraordinarily difficult, stressful period in your life,” Zakaria said.

If that became a reality, the way doctors are trained may have to be re-examined to focus more on those human qualities. For example, students at Yale School of Medicine studied art in order to learn more about diagnosing. Some medical schools also required students to read novels about the complexity of human character and emotions.

“What if that becomes the heart of the medical profession, assisted by all these supercomputers,” Zakaria said. “It seems to me that is more likely to be the vision of the future for us — that we all find a way to uncover what is really, deeply human about us. [Those are] things that have been covered up in many ways by these layers of analysis and intellectualizing and the industrial world that rewarded so greatly this kind of routine, repetitive, analytic skill.”

Zakaria believes that there is a human element that can be brought to professions that a machine could never manufacture.

“I think what it does is it forces, in every one of these professions, human beings to rethink and reshape their professions to be more human — to emphasize those distinctive qualities that make us human beings,” Zakaria said.