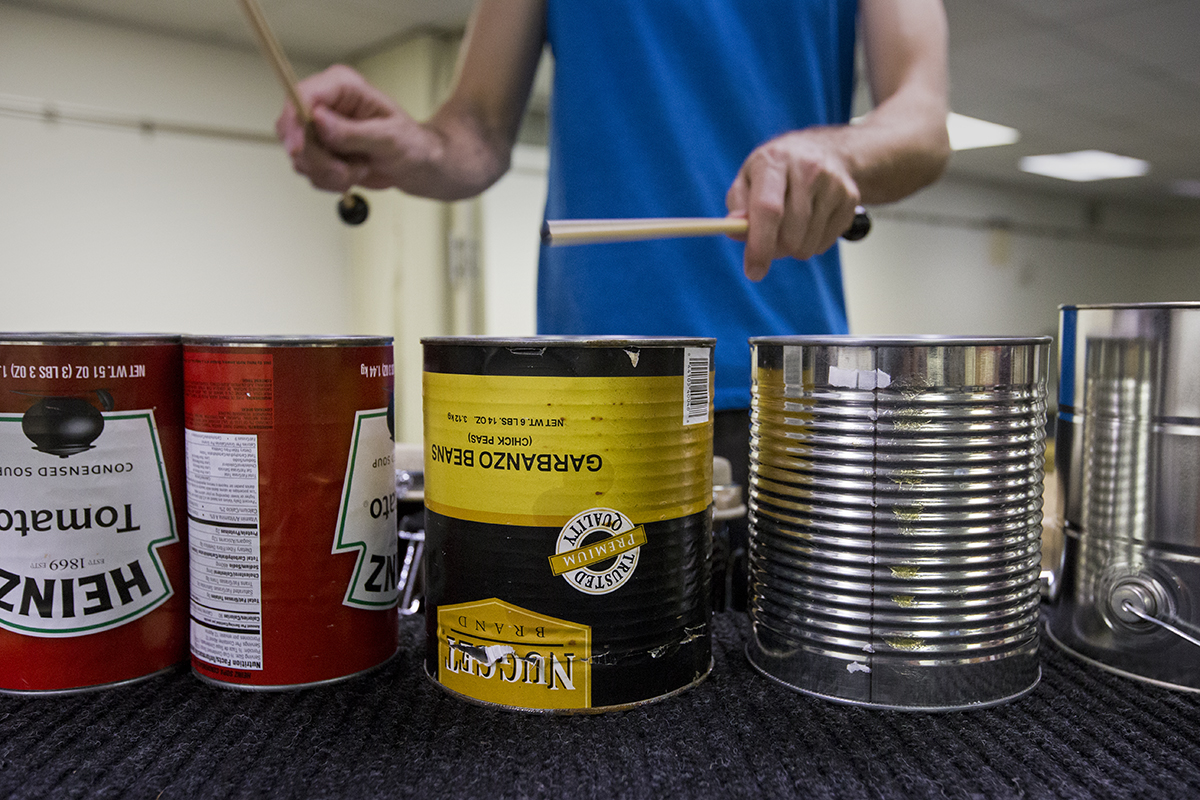 For a chamber musician, being able to anticipate the needs and movements of the fellow players in your ensemble is half the battle.

The four students in the School of Music percussion ensemble already collaborated in the inter-arts “Zeitgeist” program earlier this season, so they hit the ground running when preparation began last week for a recital.

The ensemble will play a varied program, assigned to them by faculty, at 4 p.m. Friday in Elizabeth S. Lenna Hall.

“This year, more than years in the past, I feel we are a group that’s really gelled,” said percussionist Julian Loida. “Having done the ‘Zeitgeist’ stuff and playing chamber music for a big audience, that really solidified us and made us a unit early on.”

One of the pieces played at “Zeitgeist,” “Living Room Music,” was written by composer John Cage. At Friday’s concert, the group will play another original piece from Cage.

The piece, “Third Construction,” fits cohesively with many other Cage works, because some everyday items will be used, including tin cans.

Loida said the piece interests him because it can be put together almost anywhere. He said it mixes world percussion instruments with stuff you could find in a junkyard, creating “intensely calculated” music.

“It’s just finding cans, and even though the instrumentation can be very specific, it’s also very open in a way,” Loida said. “It has metallic sounds, it has drums and it has different exotic rattles. It’s very mathematically put together.”

He said you have to be a good chamber musician to pull it off.

“It takes a lot of communication,” he said. “We’re just kind of feeling the time together, and just connecting the entire time.”

Loida, along with fellow students Matthew Flanders, Brian Cannady and Cameron Leach, were able to use their bond to their advantage. As an ensemble, they felt prepared days earlier than usual, so they were able to use the extra time to dig deep into the music.

“We can feel tempo changes better, and we can listen to each other’s phrases,” Loida said.

The fast, eccentric piece “José/beFore John 5,” by Aurel Hollo, requires two players on the same marimba to split the rhythm.

Providing a bit of contrast to the pieces by Hollo and Cage, “Mudra,” by Bob Becker, has a tom-tom drum solo, which will be performed by the group’s ensemble teacher, Michael Burritt.

“Fractalia,” by Owen Clayton, deals again with splitting times among the musicians. The piece will appear again at the Music School Festival Night Celebration on Wednesday in the Amphitheater.

Finally, a softer, more musically pretty piece by Toru Takemitsu will be performed by the group.

The skills a musician acquires while doing ensemble work, Loida said, is mostly honing the basics: knowing when to lead and when to follow.

“It’s really about having a good relationship with your colleagues,” he said. “You have to help guide each other, and let yourself be guided.”