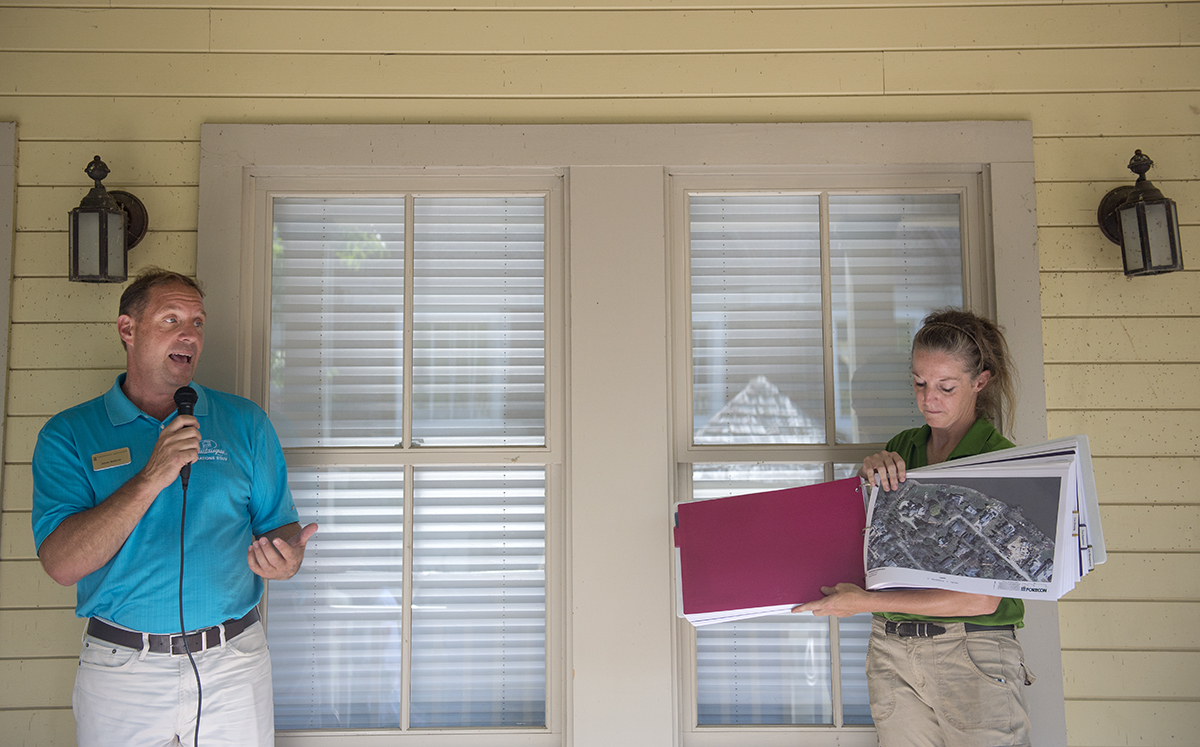 Betsy Burgeson knows about pretty much every tree on Chautauqua Institution’s grounds.

Burgeson, supervisor of gardens and landscapes, and John Shedd, director of operations and administrator of architectural land use regulations, talked about Chautauqua’s tree canopy in this week’s Trustee Porch Discussion Thursday at the Hultquist Center.

Burgeson and Shedd broke down the percentages of the trees found within Chautauqua’s community forest. From beech to maple, the two are trying to keep the tree canopy diverse.

In the past, the company Forecon provided an extensive amount of research and data collection on the canopy. That information now is collected in binders the gardens crew keeps track of in order to be proactive.

“Anything that is not privately owned property, we had Forecon come in and look at each of those areas,” Shedd said. “That’s close to 4,000 trees they assessed.”

The researchers also did additional testing to determine at-risk trees.

This year, however, Burgeson and Shedd and the 22-person crew have faced a few problems. Tree-related issues such as invasive species, including the emerald ash borer, have led to trees being cut down over the year — 607 to be exact.

“We didn’t want to keep ripping a little Band-Aid off each year for the next couple years,” Burgeson said. “We said, ‘Let’s get as many of these removals done and out as quickly as possible, so this year, everybody sees the blank slate and we go from there. We rebuild our urban forest.’ ”

Burgeson brought vials of the emerald ash borer as well as bark samples from affected trees to show attendees.

Trees either have to be cut down or injected with a treatment of TREE-äge if affected by emerald ash borer. Burgeson said she’s been working with researchers and scientists at Cornell University to better understand the treatments going forward, which could be needed for 50 years.

Other invasive species that can threaten trees around Chautauqua include the Asian longhorned beetle and hemlock woolly adelgid, which mainly affect maple and hemlock trees, respectively. Burgeson wants to know when odd creatures are hanging around the trees.

“If you see any kind of creepy bug that you don’t know what it is, trap it, put it in a clean jar — not one that has alfredo sauce still in it — and bring it up to the garden shop with … when you found [it] and where you found it,” Burgeson said. “The more people know, the better off we all are. We’re able to find things quicker. We’re able to locate things [and] get a jumpstart.”

Drought has left trees thirsty, as Burgeson said last Saturday’s rain was the most rain the area has seen since last October. The gardens crew has been staying on top of watering, but are grateful for new rain gardens that haven’t needed any.

Moving forward, the forestry might look a bit different for a while. For the 607 trees removed, 105 have been planted. Burgeson and Shedd are OK with that. It’s necessary.

Before Chautauquans simply plant or alter the trees on the grounds, Burgeson said, the department should be let in on the process. Fines can be given for tree removal without permission, Shedd said.

“If you have a tree at your house that you think needs removed, we ask you to ask us first and we’ll come out and look at it for you,” Shedd said. “If we believe that it’s a nuisance from the standpoint of safety and even property damage, we typically will work with you to get the tree removed and give you authorization to do that. If you accidently take down a tree that’s on Institution property, it could be a significant penalty.”

Chautauquan Darrell Rapp asked if there are plans for the future with the department’s extensive research of current trees. Shedd and Burgeson said the information has given them great understanding to Chautauqua’s urban forest, and they continue the relationship with Forecon.

But it’s not all “doom and gloom for the trees,” Shedd said.

“Just looking at the report, it says 85 percent of the trees on our grounds are in fair to good condition,” Shedd said. “We have an excellent tree canopy as it is today, we’re just going to manage it so we get that closer to 90 percent and as close as we can to 100 percent.”