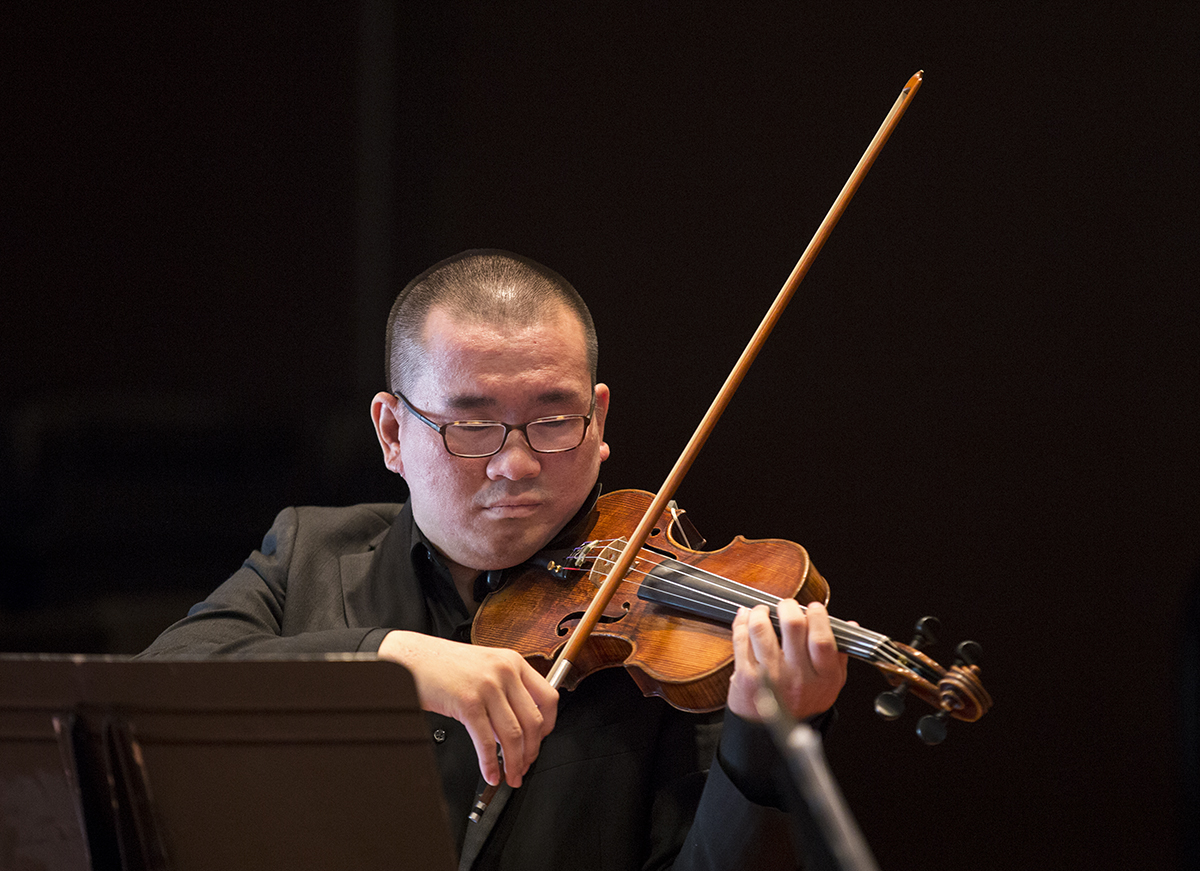 After he began losing his vision, and almost his ambition, violinist Stelth Ng gained new eyes for his work at Chautauqua’s School of Music.

When he first came to Chautauqua three years ago, Ng was not sure of his future as a musician. And for Ng, mediocrity was never an option.

“For me, as a violinist, I wanted to give up because I thought I didn’t have anything left to offer,” Ng said. “But when I came here, I realized it’s not about me.”

It’s about what he’s learned, Ng said, and how his work can inspire vocalists and serve the — admittedly visual — art forms of dance and choreography.

The father of Ng’s musical education, the late Jacques Israelievitch, was a renowned violinist on the faculty at the School of Music. He is the one who suggested Ng come for the summer program.

But the first year Ng attempted to come, he had to undergo eye surgery.

When Ng finally arrived at Chautauqua the next year, he didn’t even know there was a dance program.

“I started going to more and more dance shows, and it all started making sense,” he said. “I saw universal body language and expressions. That body language translates into articulation and phrasing in music. So now, when I’m approaching music, I’m thinking, ‘If I was a dancer, how and what would I choreograph to this?’ ”

Ng incorporates how dancers would move on stage to music into how he learns to be a better musician.

But, Ng said, no musician — even masters — feel they are perfect.

“That’s the beauty of it. We all slave away to reach that ultimate level,” he said. “But for me, it deteriorated my self-esteem. You either strive for perfection, or you’re intimidated by it.”

Ng has learned to have a balanced perspective. He strives to become better, but his priority is to serve other art forms.

“Coming here was so much more than I bargained for,” he said. “It’s sort of like going to a buffet. … You have to get up and go out there and choose what you want to expose yourself to.”

He said musicians should never just practice in their rooms all day. They need to experience other art forms, even if it seems intimidating.

Piano, which he started playing at age 4, was always Ng’s main instrument. He played in competitions, and he loved it. Even today, he feels more confident in his piano skill.

But in sophomore year of high school, when he started to lose his vision, he had to stop his work on the piano.

Ng got cataracts when he was 12. Multiple retinal detachments led to failed corneal transplants and 16 surgeries. He also had glaucoma, and is completely blind in his right eye. Although he can still read music, he experiences tunnel vision.

His 20/200 vision required him to have sheets of enlarged music, so he could continue learning.

“That’s when I started focusing on the violin seriously,” Ng said. “Why? Because it has one melody, and I don’t have to look to find the notes or the keys.”

For a period of three months, while he recovered from surgery in both eyes, Ng was completely blind. He said when he woke up, he couldn’t tell if he was still dreaming or not, and his other senses were heightened.

When he regained his vision, and came to the dance performances, the blurs of shapes and lines clicked in his mind as a connection to what it was like learning music blind.

Ng also has a background in Tae Kwon Do and ballet, which he studied as a 6-year-old boy.

The festival and apprentice dancers participate in a choreographic workshop every year, where they have an opportunity to work with an instrumentalist on their piece.

Ng lends himself to several students every year. This year, he agreed to work with about 14 before the preliminary round pared that number down.

Apprentice dancer Michael Menghini’s choreography to “The Lark,” by Mikhail Glinka will be accompanied by Ng.

“Stelth loves to come to the rehearsals and just see what’s going on so he can time the music better,” Menghini said. “He’s really been so helpful with all of it and he loves the piece, too.”

Ng said when a young dancer asked him to accompany her on the piano, playing a Chopin nocturne, it reminded him of his love for the instrument.

“I forgot where to put my fingers,” he said. “I almost forgot how to read it.”

He said if it wasn’t for the challenges brought on by his vision, he never would have taken up the violin, which steered him to this journey.

“If it wasn’t for violin, I wouldn’t have gone to university, and I wouldn’t have met [Israelievitch],” he said, adding he never would have been exposed to other art forms and would not be on the path he walks today.

When Ng is here, he feels like more than a musician.