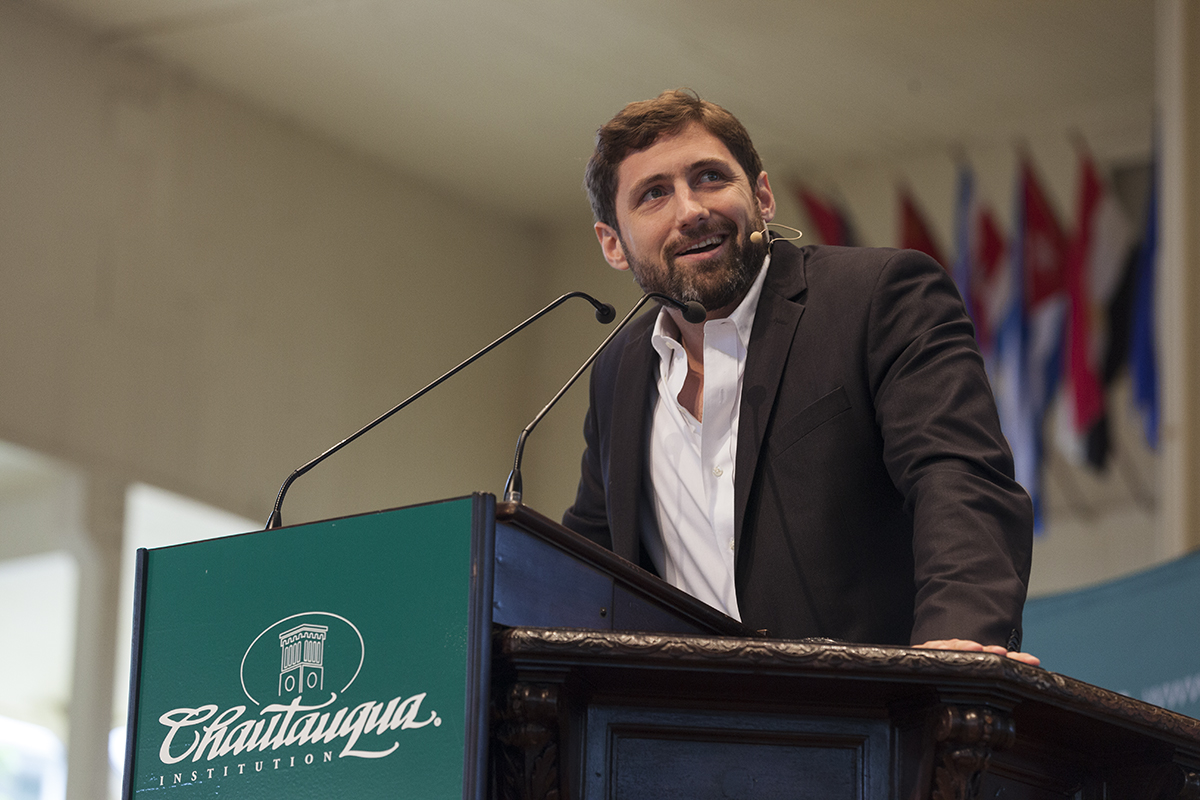 Eighty years and one day earlier, President Franklin Delano Roosevelt stood on the Amphitheater stage and declared, “I hate war.”

Phil Klay, author of the National Book Award- and 2015 Chautauqua Prize-winning Redeployment, said war is something Americans continue to grapple with today. Klay talked about his experiences as a veteran of the U.S. Marine Corps during the 10:45 a.m. Monday morning lecture in the Amphitheater.

In 2004, Klay attended Officer Candidate School in Virginia. As he went through basic training, war stories of heroes and guts and gore were exchanged. Klay knew he did not possess an excitement or a bloodlust for the war.

“This was the early days of the Iraq War,” Klay said. “It was right when things were starting to spiral out of control. We knew the war wasn’t going to be over anytime soon, and all of us expected that if we were able to make it through training, eventually, we’d be heading overseas.”

One story stuck with Klay. It was a story about Iraq, something that happened barely a year before he began his training. The story was not of another time or another war far away. It was about the war they would be deployed to at the end of their training.

In 2003, Brian Chontosh rode in the front passenger seat of a Humvee, not expecting of any dangers as he and the other soldiers traveled through the desert. However, as they drove, they found themselves in the center of an ambush — mortars, machine guns and rocket-propelled grenades attacked the Humvees.

“[The Humvee] is a tin can on wheels,” Klay said. “Imagine everything around you starts exploding and you see the Humvees around you getting shredded like metal exteriors just yielding like tissue paper.”

Chontosh ordered his driver to head into the ambush. They punched through the ambush to find a trench full of dozens of Iraqi soldiers. Chontosh got out of the Humvee and proceeded to run along the trench, aiming at the enemy. He killed two dozen people that day, Klay said. One of them was an injured Iraqi soldier who pretended to be dead so he could activate a grenade. Chontosh was able to shoot the soldier in the head before he pulled the pin on the grenade.

“The first time I was told the story, the whole point of the exercise was the spectacle of it — the high-kill count, the adrenaline-fueled race through the trench, the Iraqi soldiers falling one by one,” Klay said. “The whole thing sounded like a video game.”

Though Klay was confident in the field exercises he completed, he lacked enthusiasm when it came to the thought of killing another human being. Those stories were designed to excite Klay and the other candidates. They even shouted “kill!” with every shot they fired, and were encouraged to hold the trigger on their automatic weapons for as long as it took them to shout, “die, motherfucker, die!”

Klay didn’t grow up hearing war stories. He grew up hearing stories from his father about the Peace Corps and about his mother’s experience as she provided medical assistance to people in Haiti. He grew up learning the value of service.

“Service was something I had been raised to take seriously,” Klay said. “Of course, when my nation went to war, I wanted to do my part. I just didn’t have the huge desire to kill anyone.”

However, Klay found a fit for himself in the military. From January 2007 to February 2008, he served as a public affairs officer.

“The military doesn’t actually demand bloodlust,” Klay said. “It demands service. After I made it through my training, I took an oath as a Marine officer, and I didn’t swear to kill for my country. … I swore to support and defend the Constitution of the United States of America.”

Klay said it was about being prepared to die for a set of principles, as opposed to kill for them.

“There’s a profound difference between the two,” he said.

When Klay graduated and deployed to Iraq, he saw a different version of the war. He worked with the Marines  who made what the infantrymen did possible.

“The heroics of our troops didn’t come from slaughtering a bunch of enemies,” Klay said. “It came from getting up every day, putting on your gear and going out on roads that might kill you. When a bomb went off or a sniper’s bullet found its target, the injured would come to our medical staff on our base.”

Klay witnessed nurses, doctors and corpsmen treating the injured — “an Iraqi mother, clutching the bloody head of her infant child, whose skull had been hit with shrapnel; Marines who had been exposed to bomb blasts so forceful that it flattened their eyeballs; two Iraqi policemen who had been rescued from a torture house where insurgents had taken a power drill to their ankles.”

He distinctly remembers watching as the medical staff tried to revive an American who had been shot by an enemy insurgent sniper. Despite their efforts, the man died. Klay said the staff always took a loss of life hard, but they had no time to grieve because the insurgent who shot the young Marine had been injured and was on his way to the medical team.

“They sent out a call to the walking blood bank, and soldiers and Marines showed up to give blood for a rapid transfusion,” Klay said. “They stabilized their enemy, and they pumped him full of American blood. He lived.”

After the doctors stabilized the enemy sniper, he was transferred to a hospital via helicopter. A nurse who worked on the Marine shot by that sniper went with him to check his vital signs during the flight. Klay said that image comes back to him often, and he views it as an image that shows the American principles he took an oath for.

“America, after all, it wasn’t founded on a bloodline,” Klay said. “It wasn’t founded on a traditional set of borders or on our sense of ourselves as an ethnically distinct people, but on a commitment to liberty, to the rule of law, to the dignity of the individual and the rights of man.”

Klay said the nurse assisting the enemy sniper to the hospital was an act of war. He contrasted it to another act of war committed by Eric Fair, a man Klay met after his deployment ended.

During Fair’s time in Iraq, he worked as a private contractor. He interrogated people at Abu Ghraib to find out information about the enemy.

“Eric followed the rules,” Klay said. “He followed rules approved by his country, though they’re rules that leave him deeply uncomfortable. For some soldier on the street, the clock is ticking. He begins crossing lines, not legal lines — he follows the rules — but moral lines, personal lines. Lines where it’s clear he’s not treating the people in his interrogation room like human beings.”

It began when he interrogated a young boy who was found with a car battery and electronic devices. The boy claimed his father used the battery for fishing, though Fair was suspicious the parts were being used for a bomb.

Fair followed a set of procedures allowed by the military. He handcuffed the boy and put him into stress positions. He humiliated and degraded the boy to the point of tears. The boy broke down and told Fair the parts were sent to a shop and showed Fair the shop on a map.

When the shop was investigated, they found half a dozen vehicles in the process of being transformed into car bombs.

Fair felt a sense of adrenaline and considered his work a success story. He was thrilled the technique allowed him to uncover the car bombs, and he continued to use the technique on many other detainees who were found with car batteries. Yet, he heard the same story: The battery was for fishing.

“The point, after all, is to make people suffer until they tell you what you want to hear,” Klay said. “To do this kind of work, Eric said he has to set his humanity aside.”

When Fair no longer saw results from that method of interrogation, he spoke with another interrogator about the car batteries and the ridiculous story about fishing. The other man, however, said the detainees may have been telling the truth. It is a common occurrence to see people using car batteries to stun or kill fish in rivers.

“To this day, Eric has no idea how many innocent Iraqis he humiliated and degraded,” Klay said. “All he knows is how easy it was for him to cross the line.”

Klay said those codified procedures should set in place guidelines for individuals to make moral decisions those individuals would be proud to tell their children and grandchildren about.

“For Eric, there was a different set of codified procedures, beckoning him to cross moral lines and take actions, which he now feels condemn him,” Klay said.

Klay thinks back to Chontosh and how he said death is ugly. He is not proud of the mass of Iraqi soldiers he killed that day during the ambush. He did it because he had to do the honorable thing to protect America. Klay said what is most important lies in how individuals act in the midst of war and violence. Choosing the honorable act represents the oath he took to defend the Constitution and his country.

Though Klay is no longer a Marine Corps officer, he said he still has a responsibility to defend and protect the principles of the Constitution as a citizen.

“At the end of the day, we live in a democracy, so that document can be bent and twisted and reformed to mean whatever we want it to, which means it’s on us — all of us here — to ensure that document and the principles embedded within it are alive enough and honorable enough to be worth dying for,” he said.