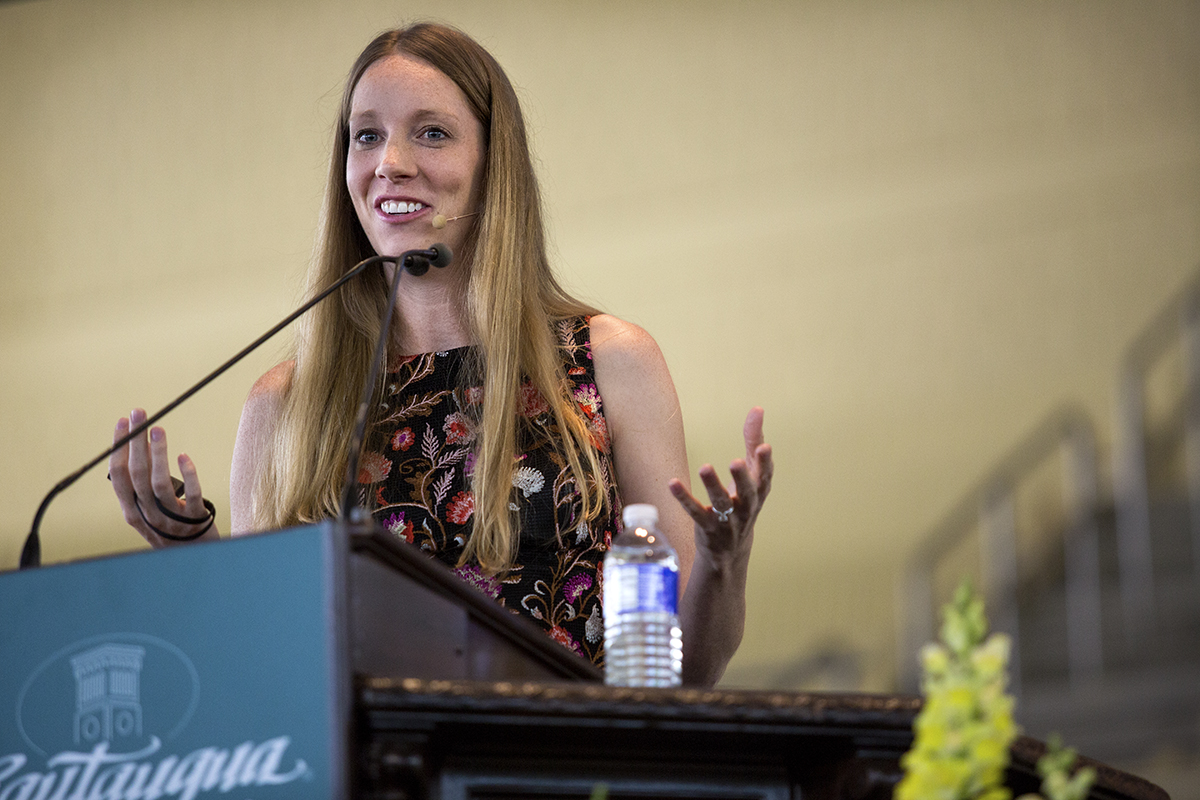 Growing up in Montana, Lisa DeLuca spent her days playing in the backyard with her siblings, where they “had to use (their) own imaginations to bring (their) toys to life.”

Now, years later, DeLuca is IBM’s most prolific female inventor and has close to 600 patents to her name. But that childhood drive to turn her imagination into reality has continued unabated.

Speaking Wednesday morning in the Amphitheater, DeLuca explored the nuances of her life as an inventor. During the “nights and weekends” when she’s not doing her day job as a software engineer, she finds that inventing — which she views as “more of a hobby” — is “a great way for (her) to escape.”

In that way, it is much like another hobby she grew up with.

“I’m going to compare inventing to fly fishing,” DeLuca said, introducing an extended metaphor that would serve as the through-line for the rest her lecture.

In that regard, inventing is just as much a skill as fly fishing. And as with any skill, one’s talent speaks for itself.

“The only thing that matters is your idea,” DeLuca said. “And all of those ideas, there’s no biases about who you are; that idea has to stand on its own.”

Recounting an early fly fishing experience with her siblings right after finishing college, DeLuca described how her older brother asked her to collect insects in the area around the river. He then chose which fishing fly to use based on what the real flies in the area looked like, knowing that this was what would attract the local fish.

“If it were me starting out, I would’ve grabbed the hot pink fly with the feathers on it … not realizing that comparing the bugs to the fly was an opportunity for success,” DeLuca said.

In much the same way, she has found learning from others to be a massive help in the inventing process, “building off existing technologies” just as she built off her brother’s fishing expertise. Describing an invention she developed after getting annoyed when house guests kept asking her for the Wi-Fi password, she noted that all the technologies involved in her social media-based solution already existed. Though the idea was novel, it still built off of the work of those who’d come before her.

But friends don’t just create the problems for which DeLuca innovates solutions; they are also a vital part of her creative process.

Just like a fly fisher sometimes requires a partner to steer the boat while they cast their line, DeLuca likes to “share (her ideas) with other people” to improve on them and generate more.

DeLuca also emphasized the importance of mentorship in all areas of life. From her father teaching her which rocks the fish tended to congregate behind, to more experienced people in her profession helping her not make the same mistakes they did, “it’s really important to have a mentor.”

In a similar vein, she noted the importance of developing expertise and “inventing around the topics that you’re familiar with.” For instance, her background in software engineering enabled many of her inventions, including location-based push notifications and dynamic taxi ads that change based on the direction from which they’re viewed.

But the invention process is not just success after success; DeLuca has faced her share of roadblocks, too. Like a fishing trip that gets rained on or fish that just aren’t biting, inventing can be “frustrating” — especially for DeLuca, a self-described “impatient patient person.”

“That’s probably why I’m so prolific with my inventing,” she said.

It takes upward of four years to get an individual invention approved by IBM and then protected by the U.S. Patent and Trademark Office, so DeLuca likes “to have ideas at all the different phases of the inventing pipeline, so that (she doesn’t) get so concerned about the fact that it’s not moving as fast as (she wishes) it was.”

Getting an invention proposal approved by the IBM review board is a game of give and take, like trying to reel in a fish without either yanking out the hook or letting the catch get away. Sometimes it ends in disappointment, with a rejected idea or one that someone else has already gotten. But successful or not, “every new idea becomes a story that (DeLuca) can share with other people” and that “makes (her) unique.”

Sometimes, DeLuca has circumvented that process and gotten patents on her own. An idea for venue seating priced proportionally to time spent in the seat (inspired by nosebleed seats at a baseball game) initially got rejected by the Patent Office. But after talking it over with the examiner and resolving issues with the application, she got the concept approved — all without the help of IBM, or even a lawyer.

“I really encourage everybody to pursue your ideas,” DeLuca said. “Go do them, and share them with other people.”

That advice is not just for adults. Referring to her own children, two sets of twins, DeLuca said that she and her husband are “always trying to encourage them to learn new technologies and play with things because it’s all about getting your hands dirty.”