Acclaimed stand-up comedian Jay Leno will kick off Chautauqua Institution’s 2017 season with a performance at 8:15 p.m. Saturday that marks the grand re-opening of the Amphitheater. This opening performance is made possible thanks largely to the sponsorship of Key Private Bank.

Buffalo & Western New York Market Manager Buford Sears said Key Private Bank was excited for the chance to sponsor the inaugural event in the new Amp, and saw the opportunity as an extension of their business motto.

“One of the hallmarks of our company is that we’re very focused on relationships with communities that we do business with,” Sears said. “The Institution is an iconic organization (and) there’s really good alignment in terms of mission in both our organizations.”

This sponsorship is an expansion of an existing partnership with the Chautauqua Foundation. Key Private Bank, the wealth management arm of KeyCorp, has managed the Pooled Key Life Income Fund for the Chautauqua Foundation since 2013. The company has also provided a revolving line of credit to the Foundation for the Amphitheater project, supplying cash flow to manage the timing differences between the pledge payment schedules and the construction costs.

“This relationship we have with Chautauqua, given (this) new beginning … it was such a natural spot for us given our long-standing relationship with the Institution,” Pitts said. 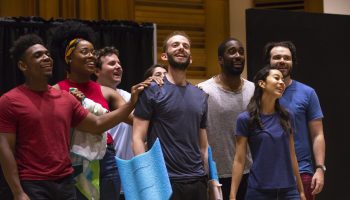