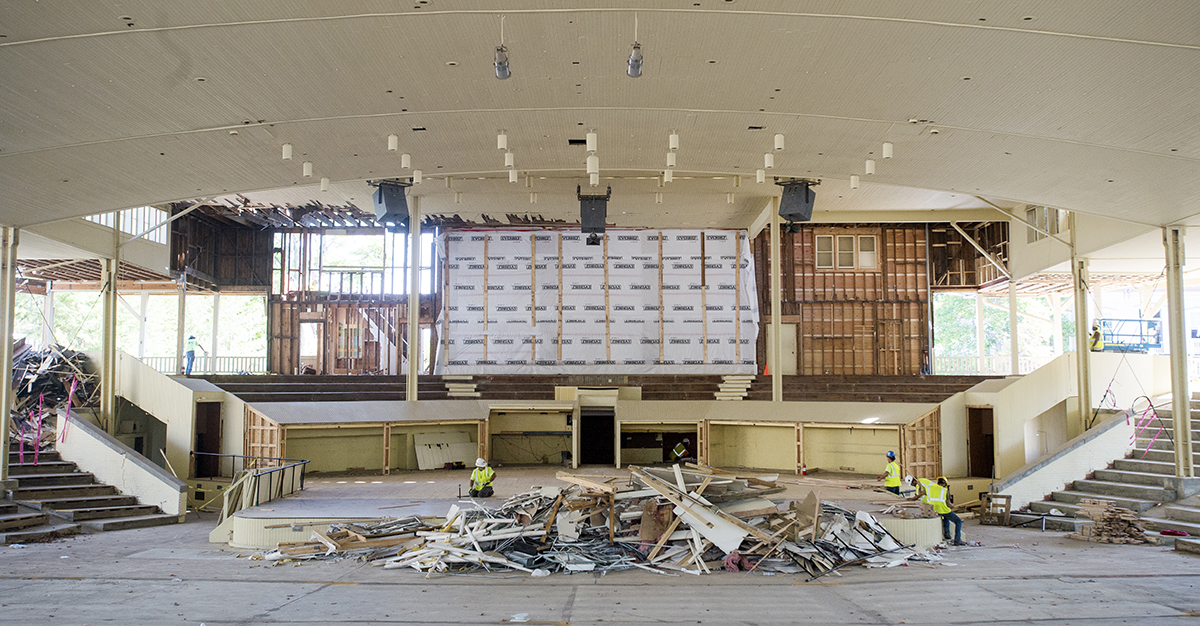 The long wait is over.

Chautauqua Institution’s new state-of-the-art Amphitheater is up and running and ready to dazzle longtime Chautauquans and new visitors alike all summer.

Now, everyone lucky enough to hold a ticket or gate pass will witness the first major entertainment show in the new Amp, as stand-up comedian and former “Tonight Show” host Jay Leno takes the stage Saturday. Leno is a last-minute replacement for Aretha Franklin, whose health issues also forced her to cancel recent scheduled engagements in Chicago and Toronto. Formal inauguration of the new facility will be July 2.

For several years, Chautauquans have followed developments surrounding plans for the Amp, the crown jewel of the just-concluded six-year-long Promise Campaign, which raised more than $100 million for the Institution.

The new building, located on the site of the old Amphitheater, is strongly reminiscent of its predecessor in the front-of-house. There’s the familiar: the curve of the ceiling, the soft cream color scheme, the mighty Massey Memorial Organ. There’s also the new: a broad stage backing an orchestra pit.

There are still sturdy steel columns around the gradually sloping floor of the Amp, but fewer of them block the view of spectators, and the wide western end of the Amp is free of bleachers that previously obstructed view of the facility on approach.

In the back-of-house, interior stairways are wide and accommodating, and the new green room is spacious and welcoming. A freight and passenger elevator provides easy access to each of the four levels. Dressing, storage and rehearsal rooms for the choir and orchestra seem designed to meet every requirement. For guest stars, private dressing areas offer comfort and convenience, which was inconceivable in the old building.

Amp Manager Keith Schmitt and his crew have not been forgotten: Offices and break areas are there for them, too. Windows and other fixtures from the old building have been integrated at various points in the new back-of-house.

A completely redesigned loading dock will expedite deliveries exponentially. The new attic will still heat up in the summer sun, but with its dozens of heavy-duty winches and pulleys, futuristic light booth and heavy-gauge flooring, it represents another massive improvement for the crew.

Although many have made major contributions to the fulfillment of the dream of a new Amp, few have matched the pivotal operational role of John Shedd, director of operations and administrator of architectural and land use regulations.

Shedd has managed to navigate the many shoals he encountered on this project, starting with years of briefings for Chautauquans in the old Amp and then in the Smith Memorial Library. As the largest public works project in Chautauqua’s modern history began to take shape, Shedd was promoted to directorship while retaining his role as the Institution’s capital projects manager.

The Institution received its certificate of substantial completion and temporary certificate of occupancy from local code enforcement officials on Tuesday.

“It looks good, don’t you think?” Shedd said. “We’re pretty close to being on schedule. It didn’t always look so sunny.”

Shedd recalled two periods when he was especially concerned about progress on the project. The first of these occurred in September of last year.

“We had demolished the old Amp and cleared out the debris,” Shedd said. “We were ready to start getting to work on the foundation of the new building, and among other things, the bowl had to be deepened.”

But the drilling contractor — a subcontractor to construction manager LPCiminelli of Buffalo — wasn’t ready.

“They had equipment problems, and I thought, ‘Wow, we’re really losing valuable non-snowy time here,’ ” Shedd said. “We had to rattle some cages.”

Former President Tom Becker intervened directly with Frank Ciminelli, the president of the Buffalo construction giant. Shedd said Becker and current President Michael E. Hill have been as helpful and involved as he could have wished.

“Both have been available whenever needed and willing to weigh in,” Shedd said.

The other problem Shedd cited was delivery of the new permanent benches, a concern that persisted for months, with work happening far from the tightly supervised main construction site.

Bench fabrication was contracted with Ratigan-Schottler, a well-known Nebraska firm specializing in hardwood bench and pew manufacturing. But when the time came to measure for bench construction, Shedd said, the firm only sent one man to do the work.

“This was in January and February, when concrete pouring began in earnest,” Shedd said. “Their man got his measurements wrong, and there followed a protracted back and forth with the firm, Ciminelli and, ultimately, us in the administration.”

After the first Ratigan-Schottler benches came in with wrong measurements, and after another attempt also failed, LPCiminelli sent in their own people to measure.

LPCiminelli also commissioned their own, correct measurements and sent them to Nebraska, Shedd said. But then Ratigan-Schottler fell behind on a production schedule revised to take account of time already lost.

“We had to get directly involved,” Shedd said.

It was clear that Ratigan-Schottler could not produce the required 7,000 linear feet of benching in time for the opening of this season, so Institution and LPCiminelli staff searched for alternative solutions. At one point, chairs were considered to provide sufficient seating for an opening show that would be a certain sellout.

A local firm and an old friend came to the rescue.

Fancher Chair, of nearby Falconer, agreed to make substitute benches on an emergency basis to fill most of the anticipated shortfall. The Fancher benches can be manufactured much more quickly because they are made of plywood, but Shedd and others said they are excellent substitutes until the original Ratigan-Schottler order is filled.

A final source was tapped. Braydon and Brooks, the Texas-based firm that purchased for resale the old Amp benches from the Institution, still had a sizeable inventory in a rented warehouse near Warren, Pennsylvania. These benches populate the choir loft to begin the season.

As of Saturday, roughly 3,000 linear feet of benches will be from Ratigan-Schottler, a similar number from Fancher, and the rest from the old Amp.

Shedd said the benches will continue to arrive from Nebraska throughout the summer, and may be swapped in to replace substitutes as it is feasible to do so.

“What a mess that might have been, to start the season without bench seating for everyone in the audience,” Shedd said. “We dodged a bullet.”

Furthermore, the Institution will not incur any additional costs due to the bench delay and temporary seating accommodations.

The estimated seating capacity of the Amp is 4,400.

Looking back, Shedd offered appreciation to many whose assistance was critical as the project kicked into high gear last fall. He mentioned particularly:

• A seven-person board of trustees committee led by Chair Jim Pardo and including the board’s two architects, Bob Jeffrey and David Rosen, who visited often and provided oversight throughout the project.

• Baggiano, who served as the administration’s off-season point man on the project. “Sebby knew the policy, the data and of course, the money,” Shedd said. “This allowed me to concentrate on the building.”

• The Department of Marketing and Communications, including director of communications Jordan Steves for his written correspondence and multi-media manager Ray Downey for his photography, received praise for regular updates to the far-flung Chautauqua community, as did Shedd’s deputy, manager of facilities and grounds Jack Munella. “We had lots of smaller projects during the off-season,” Shedd said. “Jack handled them for me, in addition to backing me up on the Amp.”

Shedd noted that tasks remain before the new Amp is complete.

“I doubt that all the rain garden handrails will be in prior to the start of the season. We have an acoustic wall in the plans and on order to muffle sound on the north side of the back-of -house, but it will be a while prior to installation. Some signage is still incomplete. But considering the size and scope of the project, this seems to me an acceptable punch list,” Shedd said.

Schmitt, the Amp’s manager, confesses to conflicting emotions about his new charge — a combination of excitement and nerves about learning how to operate in a new facility and workflow.

Schmitt manages another entertainment venue in Chautauqua’s off-season, and does not live in this area. But this year, he visited the grounds several times during the off-season to check on things and consult with contractors and administration staff.

“I think the first time anyone consulted me about what changes I might like to see in a new Amphitheater, the year was 2007,” Schmitt said. “I told them then that my first priority was to create a building with much better traffic flow. No more cramped spaces with people on vital missions running into and around each other. I think we have achieved that.”