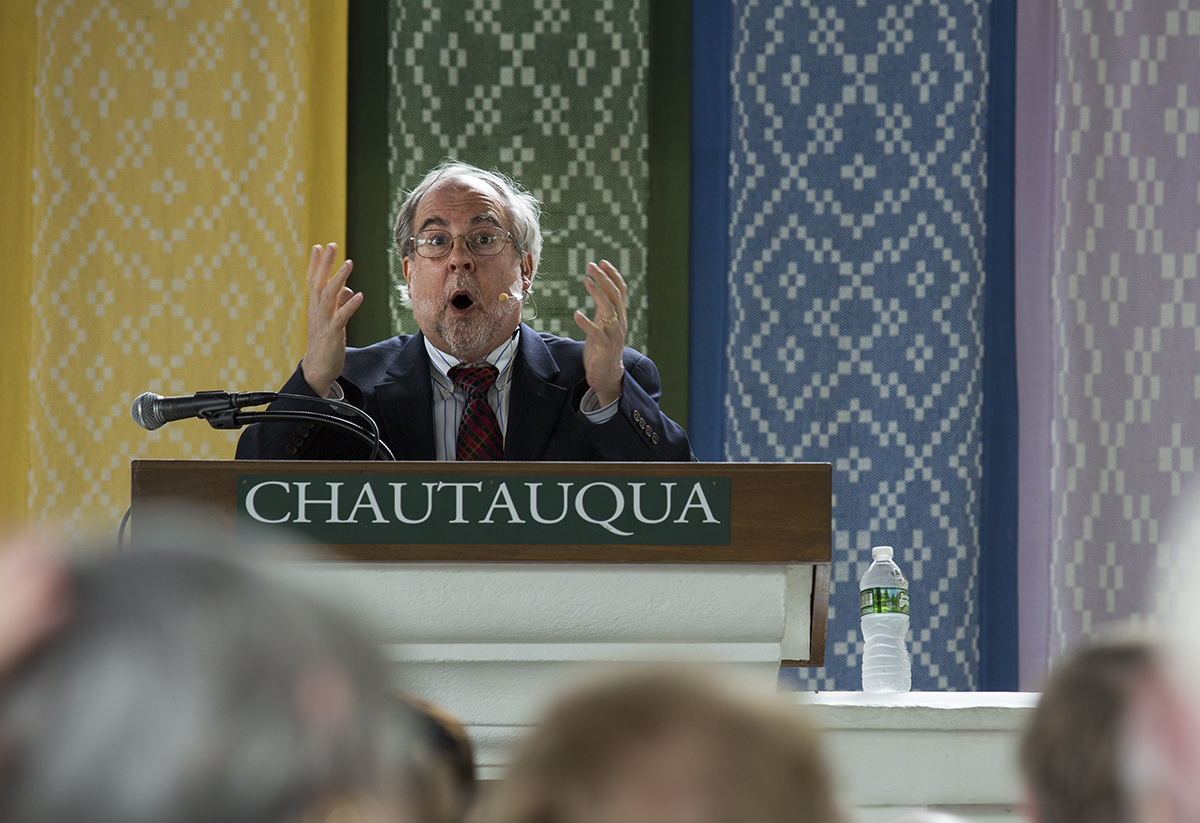 Like most kids raised in suburban America, Ed Feinstein went to Hebrew school.

Or at least that’s what he joked in the beginning of his lecture titled “Chutzpah: God and Humanity in the Jewish Religious Imagination,” Thursday afternoon in the Hall of Philosophy. The lecture was part of Week One’s Interfaith Lectures on “Inventing God? A Brief History of Religions.”

Feinstein, senior rabbi at Valley Beth Shalom, located in Encino, California, did in fact attend Hebrew school. This nontraditional activity for children his age brought about a yearning for “little league and popcorn” in his classmates. He, on the other hand, loved being enrolled, but most of his positive experience came in talking to girls.

In a family of four boys, Feinstein revered the after-school program as his only opportunity to converse with anyone of the opposite sex, which often brought disciplinary action. He wouldn’t be quiet. And even with the teacher’s warnings of “Sheket!,” or “Be quiet!,” Feinstein was relentless, often being sent to the library as a punishment. It was there that he learned to love Jewish ideas. Assigned to this penalty one too many times, his teacher elevated her literary requests: “Write a book report on the Bible and have it done by 6 p.m.”

Feinstein said religious people tend to teach one holiday or one ritual to their children, but they never stop to “consider the story of their faith.” He said he’s been “writing that story since the third grade.”

He outlined next a Mesopotamian myth about two bodies of water being divided, giving way to separate gods who worshipped lust, passions and jealousies. Everyone living in this dark world was killed in an attempt to restore peace. When the leader of this broken world was put to sleep by the gods, his wife wanted retribution. She planned to kill the gods who killed her husband. A battle raged between the woman and one god; the god was victorious and was crowned king of the gods. The vanquished wife, in turn, became the mother goddess, whose blood humanity depended on for continued life.

“A myth is a statement of a culture’s fundamental truth in the form of a story,” Feinstein said. “Pitted in perpetual warfare, this is a world without order. A world without stasis. A world without a moment of peace. And in this world, a human being is put as a pitiless, powerless bystander. Anything a human being might dare to build will be snatched away or sullied by the uncontrollable impulses of the gods. We are children building sandcastles by the seashore. The tide inevitably and irresistibly comes up and wipes all of our plans and projects away.”

He said the Hebrew Bible was a “polemic against this worldview and said image of human experience.” Reading from Genesis 1, Feinstein said it felt dull in comparison to the twists and turns of the Mesopotamian explanation for human life.

Instead of a human being created from that blood of a vanquished goddess, Feinstein said, the contrast presented in Genesis is that humanity is said to be made in the likeness of God. Additionally, the human being is given joint sovereignty with God, having dominion over everything on Earth. Instead of being powerless, humans are established as God’s partner in creation.

This is where the idea of “chutzpah” comes in: it is said to signify “irrepressible strength and irrepressible boldness.” Feinstein said that “theology, our connection to God, is correlative to anthropology, our conception of what it means to be a human being.” And this chutzpah is said to be carried through three separate acts in the biblical story.

In Act 1, Feinstein said, the reader learns that God creates a world and speaks a blessing over it. Act 2 depicts man’s pivot away from this God. And finally, Act 3 shows God’s attempt to teach the men who strayed. Feinstein described the Garden of Eden as being the perfect set for this drama, its initial purpose being a “piece of coexistence and tranquility.”

“The Garden of Eden is the epitome of God’s version of the world — a place of oneness,” Feinstein said. “Consider that image for a minute. God doesn’t put them in a forest or a shopping mall or a palace. God puts them in a garden because a garden is that marvelous place which is the meeting place of artifice and nature. A garden is shaped by knowing hands, but it is animated by the energy of nature. A garden is dynamic. It is always growing and changing; it is always in need of care, cultivation and work.”

“We typically like to think of religion in terms of vertical metaphor,” Feinstein said. “We think of ‘our father who art in heaven. God is exalted. Human beings are humbled. God above, humanity below.’ But the Bible’s idea of covenant turns the vertical image horizontal.”

Feinstein brought the audience back to the idea of God having a partner in man, referencing his cellphone as a vital connection between he and his wife. Most days, he said, he receives a call in the afternoon from his wife asking him questions like when he will be home and what he would like for dinner. If Feinstein does not answer, his wife becomes frustrated, as her agenda is being put on hold.

“Can God call anyone and say, ‘Where are you? What are you doing?’ Yes,” Feinstein said. “Abraham can. If Abraham is to promote God’s justice in the world, to be its advocate and its teacher, that justice must become transparent. God and Abraham must share a common moral language, and God must be accountable to the same standards of justice.”

He told the biblical stories of both Abraham and Job, men who questioned God’s divine authority. They tell God he has broken their hearts. However, their cries for help and expressions of anguish, though, are not met with destruction.

“Here is the miracle of the Bible: God says, ‘OK, you’re right,’ ” Feinstein said. “A God who accepts human rebuke is a God more committed to teaching the ideal of justice than in maintaining the divine prerogatives of authority.”

But even after all of these accounts, Feinstein said, myths about origination still circulate.

“Myths lie dormant waiting to find roots in new cultural soil,” he said. “To a population confounded by global, political, economic and environmental threats, the myth whispers to us: ‘Your fate, your destiny is determined by forces far beyond your comprehension. Problems of your world are retractable; they cannot be fixed. The status quo cannot be moved, and you are certainly not responsible.’ ”

This concept leads to the concept of cinematic superheroes. Feinstein discussed the success of movie franchises centered around the idea of a saving entity protecting all of humanity. He said this breeds “disengagement and resignation,” the idea that only superheroes can solve the world’s problems.

“So would you recommend this book to your friend?” Feinstein asked of the Hebrew Bible. “Now more than ever.”