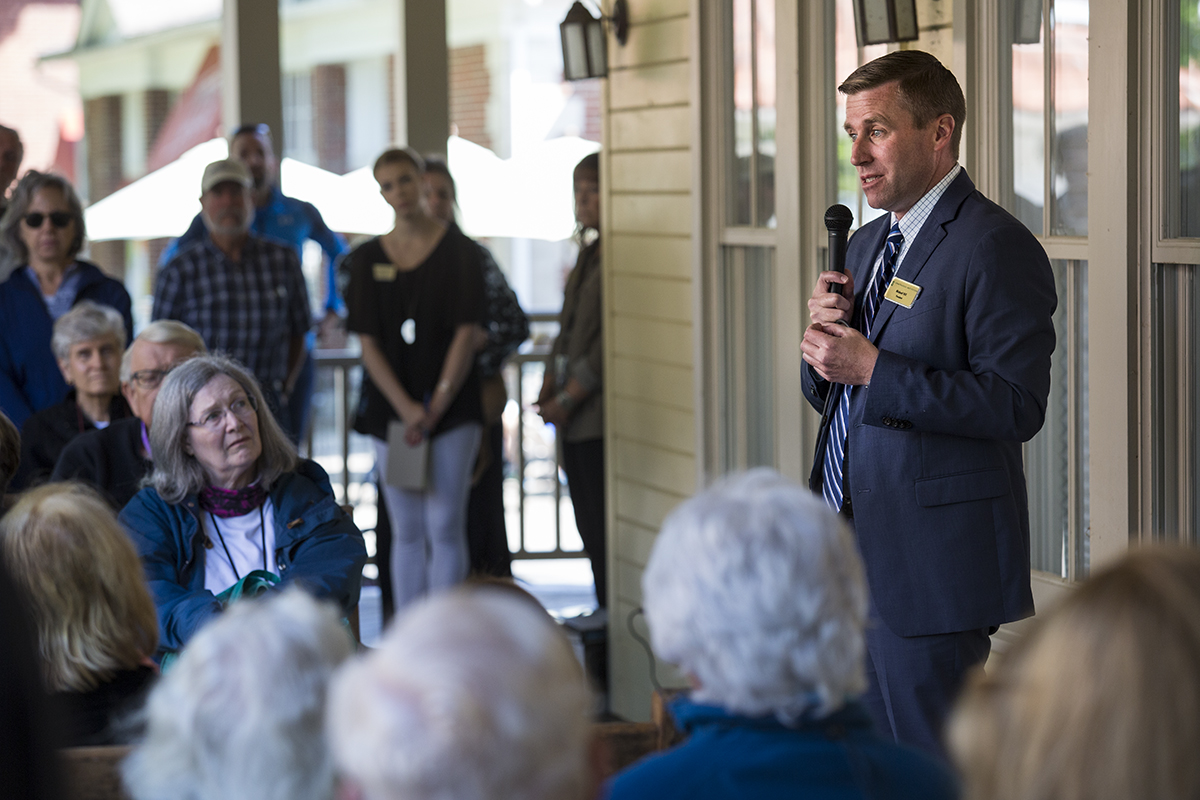 Each summer, Chautauqua Institution hosts lecturers from across the world. With a slew of talks lined up, it’s almost as if President Michael E. Hill is on a speaking circuit of his own.

The most recent stop on Hill’s tour was Wednesday morning on the Hultquist Center porch for the season’s first community Porch Discussion. A crowd of around 50 gathered to hear Hill speak, and, perhaps more importantly, to have the opportunity to ask him questions.

After Hill’s brief address, he dove into answering questions and comments from the audience. Some expressed concerns with the recent appointment of the Rt. Rev. V. Gene Robinson — who is openly gay — as incoming vice president of religion and senior pastor.

“Where I hope you will judge him, and Maureen (Rovegno, associate director of religion), is on the breadth of programming and whether that represents the full depth of who we are,” Hill said in response to an audience member’s comment.

Other audience members brought up the Institution’s tendency to not always welcome new perspectives and demographics.

“Chautauqua for me, is an incredible example of an imperfect ideal,” Hill said. “One of the things that I love about Chautauqua is that it wrestles with itself. I think we need to be honest about our own history — we have struggled to welcome the new here since our founding.”

Hill went on to liken Chautauqua to “a mirror to what society wrestles with,” acknowledging the Institution’s resistance to a Jewish population that has now become a large and vibrant portion of the Chautauqua community. Hill also made mention of the Institution wrestling with issues regarding Islam.

“The world is wrestling with issues about Islam,” Hill said. “I wrestle with issues of Islam. The balance issue becomes really important for me.”

In his brief time as president thus far, Hill has become both a sounding board and listening ear for Chautauquans’ concerns. He said if someone is uncomfortable in a lecture, be it with the content or with the audience’s response — applauding in agreement with a sentiment, or, on the contrary, booing — he’s going to hear about it. Chances are, he’ll be approached directly.

“Perceptions are a mighty powerful thing,” Hill said. “When I call on us to try to engage in a muscular civic dialogue, it’s not that I don’t want you to be elated by things — I hope you’re elated by lots of things in the Amphitheater — it’s to be conscious (that) how we react to those thoughts and ideologies is telegraphing something to someone who may hold an opposite view.”

“Muscular civic dialogue” is a nod to a moment within Hill’s inaugural address last Sunday in which he defined the term as “the art form of true listening” that “takes hard work, repetition and practice.” He encouraged Chautauquans to take the dialogue beyond the Amphitheater, into their homes, Bestor Plaza and wherever else the conversation might carry.

This season marks the start of a new chapter at Chautauqua, one that comes on the tails of a contested but mostly complete Amphitheater project, departed leadership and other changes that have not gone unnoticed to the watchful Chautauquan eyes.