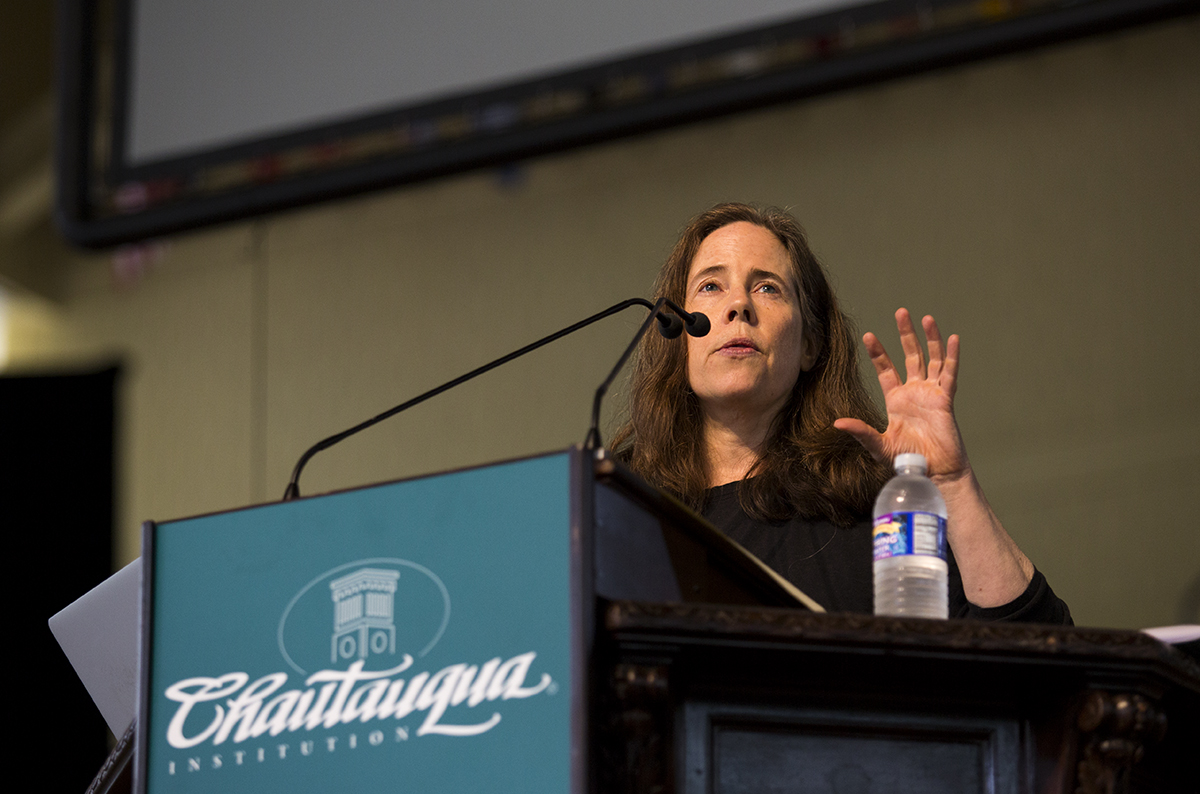 Pagan Kennedy, author of Inventology: How We Dream Up Things That Change the World”, closes Chautauqua Institution’s week on “Invention” on Friday, June 30, 2017 at the Amp. ERIN CLARK / STAFF PHOTOGRAPHER

“How are new ideas born?”

It’s a question that many of Week One’s speakers have hinted at, but none so explicitly as Pagan Kennedy.

Kennedy, author of Inventology: How We Dream Up Things That Change the World, delved deep into this issue during her Friday morning lecture at the Amphitheater, wrapping up the week’s theme of “Invention.”

“I’ve been thinking about (it) for more than 15 years as a science and technology writer,” Kennedy said. “And … that question really came into focus for me during the couple of years when I was the ‘Who Made That’ columnist for The New York Times.”

In that capacity, where she explored the histories of iconic inventions like sliced bread or the pencil eraser, Kennedy noticed that these products tended to share certain traits.

“The big surprise … was when I realized how many of the people who had originated the really big ideas — the objects, the things you use everyday — were not people who considered themselves to be inventors when they began,” Kennedy said. “They were people like you.”

And those humble origins were not the only thing they had in common. Talking to inventors over and over again, Kennedy “began to notice patterns in how they had come up with this really new way of seeing things.” Though there was no one big secret about the inventing process, there were lots of little “secret sauces” that made the inventing process easier.

The first of these strategies is to “find a problem that no one else has noticed yet,” Kennedy said. Not just obvious ones, but also those that “we’re just not seeing yet.”

As an example, Kennedy showed the audience a picture of a 1960s airport baggage claim. Although it looked mostly modern, it only took a few moments for Chautauquans to observe the one big difference: none of the suitcases had wheels.

“The idea of having a special suitcase for the airport was crazy sounding” in an era when flying was prohibitively expensive, Kennedy said. “That’s why these suitcases are designed to go into a car.”

Times changed, and in the 1970s luggage executive Bernard D. Sadow invented the first wheeled suitcases; but his design was inconvenient, falling over sideways and rolling too quickly down inclines. The concept wouldn’t get its modern look until the 1980s, when a pilot named Robert Plath built himself a newer, better wheeled suitcase so that he wouldn’t have to deal with the impractical Sadow version on a daily basis.

“(Plath) had skin in the game,” Kennedy said. “If it didn’t work, day after day, he was gonna feel the pain of it.”

Wheeled suitcases aren’t the only innovation that has emerged from the mind of “people at the front end of the problem,” however. This sort of process came up frequently in the inventions Kennedy researched.

For instance, Debi Latour was born with only one hand and had to wear a bulky, harmful brace to control her prosthetic replacement. By age 50, the brace had “done so much damage to her body” that she was forced to design a small, wearable device to replace it.

“Although she didn’t think of herself as an inventor, she had no choice but to invent her way out,” Kennedy said.

Other unexpected inventors include Richard Belanger, a stay-at-home dad who designed the sippy cup after all his toddler’s other cups dripped, and Claire Straith, a plastic surgeon who “should be considered the father of automotive safety” for creating the precursor to the airbag.

Echoing the context-contingent innovation of these figures, Kennedy prompted the audience to personally consider a problem that “has been keeping (them) up at night.” Providing her own example, Kennedy noted that she’d like a better way to use a laptop while on the treadmill.

One such voice was that of Meg Crane, a young artist in the 1960s who worked by day at a pharmaceutical company. Crane was inspired in the company’s labs to invent a pregnancy test that could be used at home (rather than at a doctor’s office as was standard), but “her bosses thought it was a really stupid idea.” So instead she patented the tool and did the work herself, to great success.

“She saw the problem differently being a young woman, a young artist living in (Greenwich) Village, by virtue of her own experience,” Kennedy said. To be a similarly impactful inventor, people can “capitalize on (their own) outsiderness.”

Another path toward innovation is to “predict the future,” since all things created today will ultimately be used by people later on.

“You have to run ahead of what’s happening to see what the problems and needs are going to be,” Kennedy said. “And I think, therefore, part of successful creativity is prediction.”

Pointing to Jules Verne’s 1865 From the Earth to the Moon, which predicted space travel more than a century before it happened, Kennedy noted that futurism can inspire people to pursue inventions that might not otherwise be considered possible.

That dynamic doesn’t just reside in science fiction novels, either. Motorola’s Martin Cooper, inventor of the cellular mobile phone, combined film director-esque showmanship with bare-bones but functional hardware to convince the Federal Communications Commission that such technology was actually possible.

“Part of his role was simply expanding people’s ideas about possibilities, almost working like a science fiction author,” Kennedy said.

Similarly, Alan Kay of Xerox PARC, “saw in the ’60s that small personal computing devices were almost inevitable … even though it was really impossible to build those things effectively at the time.” Just as hockey player Wayne Gretzky went where the puck was going, not where it was, Kay talked about “going where you know things are going to be (in) five or 10 or 20 years, rather than trying to look at what’s around us right now.”

Kennedy also noted that the creative process can work in reverse, first finding something that looks like it could be a solution and then matching it to a problem after the fact.

For instance, the Super Soaker water gun came about when NASA engineer Lonnie Johnson realized that a particular nozzle caused water to spurt out very forcefully.

“To him, this was a solution, and he needed to find a problem,” Kennedy said.

Many artificial sweeteners were created in similarly “serendipitous, accidental, backwards” ways when lab workers accidentally tasted different chemical compounds and realized they were sweet. In fact, Kennedy discovered during her research that “50 percent of people who came up with a patentable idea” had done so without looking for it.

With that spontaneity in mind, Kennedy closed out her lecture by asking the audience how it can be possible to find something without looking for it.

“The really big discoveries are out there in the unknown unknown,” Kennedy said. “In the places we don’t even know we don’t know exist.”