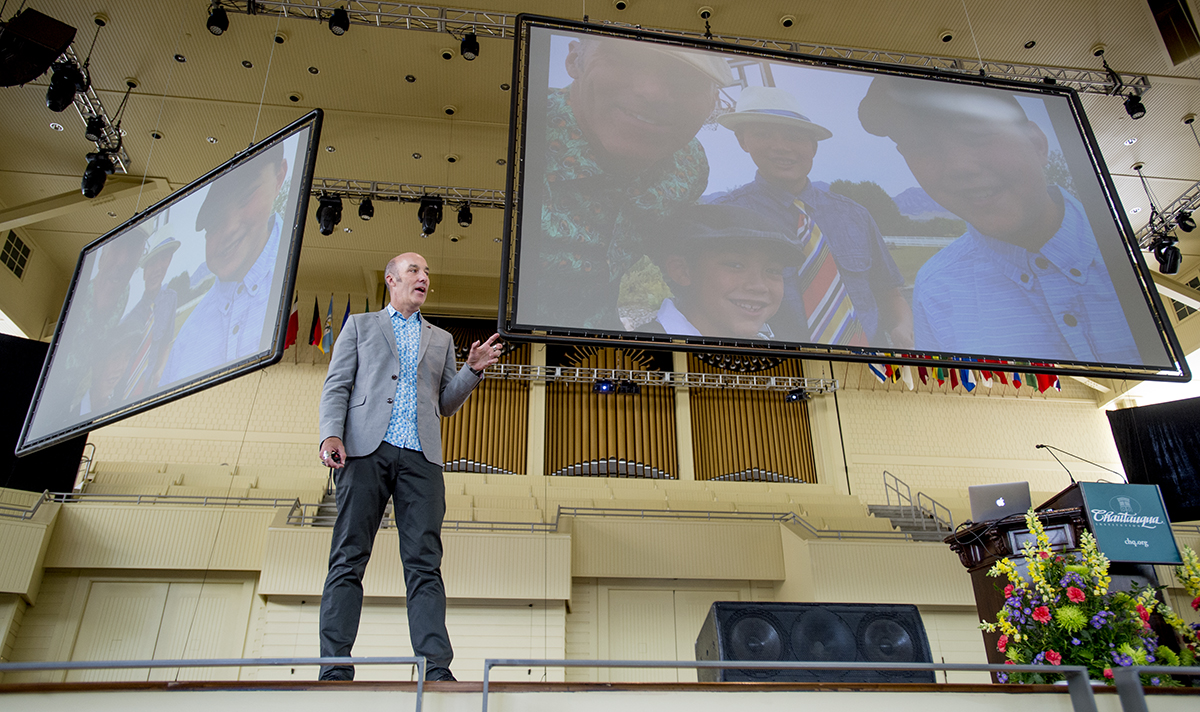 George Kembel started coming to Chautauqua eight years ago, but it was another two years before his kids came along, too. And despite co-founding Stanford’s design-centered d.school, parenting has in some ways been “the hardest design challenge” he’s faced.

Speaking Thursday morning in the Amphitheater as part of Week One’s “Invention” theme, Kembel discussed the creative process, emergent behavior, and how to adapt design thinking to various areas of life. But his lecture always seemed to come back to being a parent.

“Think about the world we’re sending our kids into,” Kembel said. “It’s a world of radical uncertainty and increasing complexity … one of exponential change.”

Noting that “the generation gap is now every two years,” Kembel pointed out that his own sons can’t even rely on one another for guidance, let alone their parents.

“Every single person is being forced into being a pioneer,” Kembel said.

It is out of this dynamic context that emerges his desire to do on a much larger scale what he did at Stanford with the d.school: “unleash the creative potential of every human on the planet.”

“(Creativity) is a lifelong practice, so I’m working with kids and parents and students and leaders, all around the world,” Kembel said. “And we’re experimenting with how you create the conditions so learning can happen where people are. … You can use creative strategies to prepare yourself to venture into unknown circumstances.”

In order to demonstrate this ethos, Kembel invited his 8-year-old son Carter onto stage and the two led the audience in a group activity. Following the father and son, pairs of Chautauquans began counting to three over and over, alternating back and forth. After a while, Kembel had them replace the word “one” with a snap.

Many Chautauquans had some difficulty keeping track of the sequence, and Kembel soon asked, “What did you do when you messed up?”

The audience shouted answers to the stage: some had laughed, clapped, or restarted the sequence. But Kembel had one specific reaction in mind.

“You may not even have been conscious of it, (but) most of you broke the connection,” Kembel said. If the partners didn’t acknowledge their mistake by “releasing emotion” (as with laughing or clapping), they tended to physically “turn away from the person.”

It is this impulse toward shame, rooted in evolutionary selection and social conditioning, that closes people off from creativity. But by shying away from risks, Kembel said, people also limit their opportunities to learn and grow from failure.

With this in mind, he and his son led the audience in the same counting activity, but this time had them celebrate when they made a mistake. The result? Kembel observed that the audience’s “performance improved,” they “went faster,” and “they weren’t as tight.”

Having created emotional security for themselves, the partners were open to failure and could learn creatively, Kembel said.

If this comfort with making mistakes is vital to navigating the modern world, then the central question for Kembel becomes how to teach it. Creativity, after all, is “by definition … not predictable,” so how does a leader create an environment conducive to it?

What’s our response to failure? Embarrassment.

Seeking an answer to this dilemma, Kembel drew on the field of emergent behavior: complex, self-organizing behavior in which individual members act without top-down planning. It exists everywhere in nature: schools of fish, beehives, ant colonies, bird murmurations. But to Kembel, it’s all too absent from today’s industrial organization strategies.

“The emergent behaviors of (a) group are by definition unpredictable,” Kembel said. It is this large-scale randomness that he hopes will answer how “you lead toward unknown outcomes that preserve creativity.”

Through another group activity, Kembel demonstrated how a few basic rules can allow a team to reach positive outcomes even without centralized leadership. Imagining a school of fish, the audience developed basic rules a single fish could follow that would allow the whole school to succeed — things like swimming toward food, swimming away from sharks, and staying close to neighbors.

“Pretty soon (decision-making) cascades through the whole collective … and you haven’t had to say anything about a strategy,” Kembel said.

And just as it works with fish, so too can it work with humans. Or at least that’s the idea underlying Kembel’s d.school system.

By dissolving the boundaries between traditionally siloed groups (staff, teachers, students) and treating them as a collective, while simultaneously organizing individuals into small collaborative teams that act on their own following nothing but a basic “scaffolding,” Kembel said that creative behavior emerges on its own.

The behaviors that these independent units follow are the tenets of the design thinking process, which include empathy, definition, ideation, prototyping and testing.

When d.school students went to Myanmar to help local farmers, Kembel said the groups developed solutions to problems following only the design thinking process, without any top-down leadership. Through empathy and rapid prototyping, one student group invented a lantern that went on to provide lighting to more than 65 million people.

“Instead of having different groups that are working different ways … everyone is using these behaviors,” Kembel said. “And instead of those different groups and different dynamics and cultures, you have one collective that — I don’t really know how to describe it — is ‘buzzing’ with a coherence that we don’t normally feel.”

Pointing to his identity as an identical twin, Kembel said that he has “always wondered, am I special on my own?” But he believes that the self and the collective can be bridged through design thinking that takes advantage of emergent behavior.

With this ideology, Kembel hopes to change not just business and education models, but also what it means to be a parent.

Introducing the concept of “designful parenting,” he described a pilot program run in Sydney where a mother applied the design thinking process to problems she had with her son. By following a simple sequence — share what you notice, ask what they notice, generate lots of ideas, and try them — the family came up with a number of creative solutions that met the needs of all members and have stuck around to this day.

“If you get these behaviors working in the small ways, and you get the right patterns, and let go of needing to know what the outcome is, you’d be surprised what type of emergent behaviors there are,” Kembel said.

Ultimately, these techniques are wildly different than the way Kembel was taught to lead when he was a CEO and a venture capitalist, and the way that many people are trained to “fix things” and solve problems.

“Our industrial strategies (are) the way we got to scale; and by structuring that way, we can reach scale, but we take the life out of our systems, we take the creativity out of our systems,” Kembel said. “I would suggest, for us to venture into this unknown time, we need to be working in a way that’s more human — that allows our kids, and all of us, to venture into the unknown with our creativity intact.”