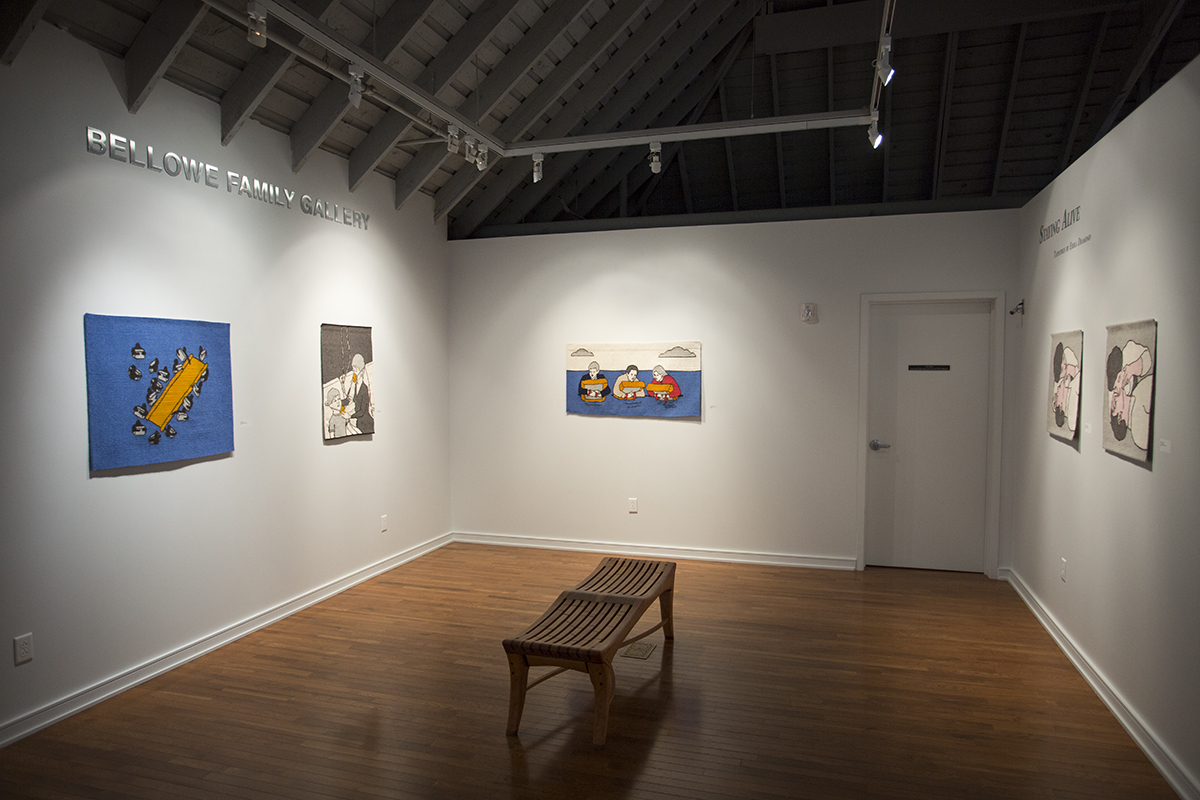 One evening in late summer, Judy Barie picked Erika Diamond up for dinner. Barie asked what Diamond, an artist, was working on. Diamond showed her. It was a tapestry titled “Mother and Child Inhale,” a nearly life-sized version of a small image taken from an airplane safety instruction card, in which a woman affixes her own oxygen mask before helping a child.

“I just had an immediate reaction to that piece,” said Barie, the Susan and Jack Turben Director of Galleries for Visual Arts at Chautauqua Institution. “I’d never seen anything like that before. So that’s what prompted me to tell her to keep going in that direction. She was onto something great.”

That was in 2015. Diamond took Barie’s encouragement and ran with the project, working mostly during the winters, when she wasn’t occupied by her job as the assistant director of galleries for VACI. An opening reception for the show “Staying Alive: Tapestries by Erika Diamond,” along with receptions for two other shows, will be held at 3 p.m. Wednesday in Strohl Art Center.

Diamond first began learning to weave about four years ago, while earning her M.F.A in fiber at Virginia Commonwealth University. The eight pieces now on display were made using a floor loom, with alpaca wool for the weft threads. Weft threads are fibers woven across the warp threads, which are the fibers that stay strung on the loom.

“Weft: you weave from ‘weft’ to right. That’s how I remember it,” Diamond said.

With tapestry, Diamond can weave images rather than patterns. For the “Staying Alive” collection, she started with small images from instruction booklets that she then enlarged to the size she would use in the tapestries. The images tended to pixelate, which was actually useful for Diamond as she worked with a grid of threads.

The images Diamond began with may have been small, but they held multiple meanings. The first tapestry Diamond completed, “Mother and Child Inhale,” reminded her of a “Madonna and Child” image. It made her wonder what her own mother would do in such a situation.

“Alongside our own desire to remain alive, we have this compassion for other people, too,” Diamond said.

Her tapestries explore how people balance self-preservation with altruism, especially in extreme situations.

Diamond’s chosen medium is particularly fitting in the context of her work “Three Fates Floating,” which shows three people in water hugging airplane floatation devices. The title and composition are a nod to a Flemish tapestry from the early 1500s titled “The Triumph of Death” or “The Three Fates.” In Greek mythology the Fates measured and cut the thread of life, but in Diamond’s version, their role is spun upside down. The thread of life is visually present as the horizon line, Diamond said, but also represented by the precarious circumstances in which the three depicted find themselves. In a sense, the many threads used to create the tapestry represent many lives bound together, showing again a negotiation between the needs of the self and the needs of others.

Weaving is not Diamond’s usual medium. She primarily considers herself a sculptor, but she appreciates the tactile aspect of tapestry.

“This is as close as I’m going to get to a drawing,” she said. “It’s been really different for me, not only to work in two dimension, but to work in image.”

Five of the tapestries depict images from instruction manuals on giving CPR or performing the Heimlich maneuver.

“These are split-second situations, these life-or-death moments. What drew me to the CPR imagery were those intense moments of physical contact,” Diamond said. “They’re really powerful moments and I wanted to see what they would look like out of context.”

Diamond said she looks forward to the opening reception and the chance to have people see her work as artist in a setting where she usually puts up installations of other artists’ work.

“It will be nice to share this other part of myself with people,” Diamond said. “I’m excited to get feedback, too.”

“It’s important for people who come into the gallery to know that we are all artists too, most of us here,” Barie said. “That’s why we take such pride and care in showing other people’s work, because that’s how we would want our own work to be handled and displayed.”