If it’s Tuesday, this must be Buffalo.

Well, not exactly, but it is Buffalo Day at Chautauqua. It’s the eight annual celebration of the cultural contributions made by the Queen City to both the Institution and the nation.

Two Buffalonians who have made significant cultural contributions of their own will appear at 3:30 p.m. Tuesday in the Hall of Christ in a program titled “Creating a Heritage of Faith and Art: The Buffalo Religious Art Center,” as part of the Oliver Archives Heritage Lecture Series.

In 2007, the Roman Catholic Diocese of Buffalo announced the closing of a number of its churches as part of a huge reorganization. Mary Holland, a Buffalo native, read about the plan in the newspaper and determined to visit each church before it closed.

“As I sat in these churches, I thought how sad it was for the people,” Holland told the magazine Forever Young. “Then I thought, ‘What’s going to happen to the artwork, statues and stained glass windows?’ ”

In 2008, she founded the Buffalo Religious Arts Center to collect and preserve the rich artistic and historic legacy housed in Buffalo’s churches and synagogues. The group restored the former St. Francis Xavier Roman Catholic Church in the city’s Black Rock section and turned it into a museum. Since it opened, the center has acquired works of art from more than 45 churches, including more than 50 stained glass windows. And while most of those works are from Catholic churches, the center exhibits items from any faith.

“We will preserve anything sacred from any church,” Holland told Forever Young. “When Temple Beth El closed, we acquired a monument with the Ten Commandments in wood and brass and a Star of David.”

In her presentation Tuesday, Holland will show images from the museum’s expanding collection and discuss the ethnic and cultural significance of how the art was created and preserved.

Dennis Galucki is a former investment adviser with Dean Witter who grew up in and around Buffalo and who has become something of a fixture around Chautauqua.

His philosophy, he says, is “Invest in Life,” and with that in mind, he created and directs the websites C-SAAHN (the Center for the Study of Art, Architecture, History and Nature, pronounced like the artist Cezanne) and IMAGINE, both of which serve as repositories of lectures, classes, discussions and other educational resources.

The idea grew from a Special Studies class Galucki began teaching at Chautauqua in 2006. It evolved to include a weekly discussion group called “The Art of Investing — in Life: Your Life and Your Community’s Life” at the Smith Memorial Library and audio recordings of the Oliver Archives Heritage Lecture Series at Chautauqua, which Galucki offers free of charge on his website imaginelifelonglearning.com. His program in Buffalo has drawn more than 9,000 participants, according to the Buffalo & Erie County Public Library System.

His websites also feature videos of speakers and discussions, and Galucki estimates that he has recorded more than 270 lectures in the past 10 years.

On June 20, Galucki was honored by the Erie County Executive’s Office with a proclamation that recognized his “extraordinary passion and strong commitment to encouraging lifelong learning through his volunteerism, dedication and deep interest in the region’s rich heritage.”

Video: ‘So You Think You’re Louder Than an Opera Singer?’ 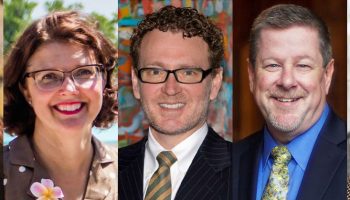