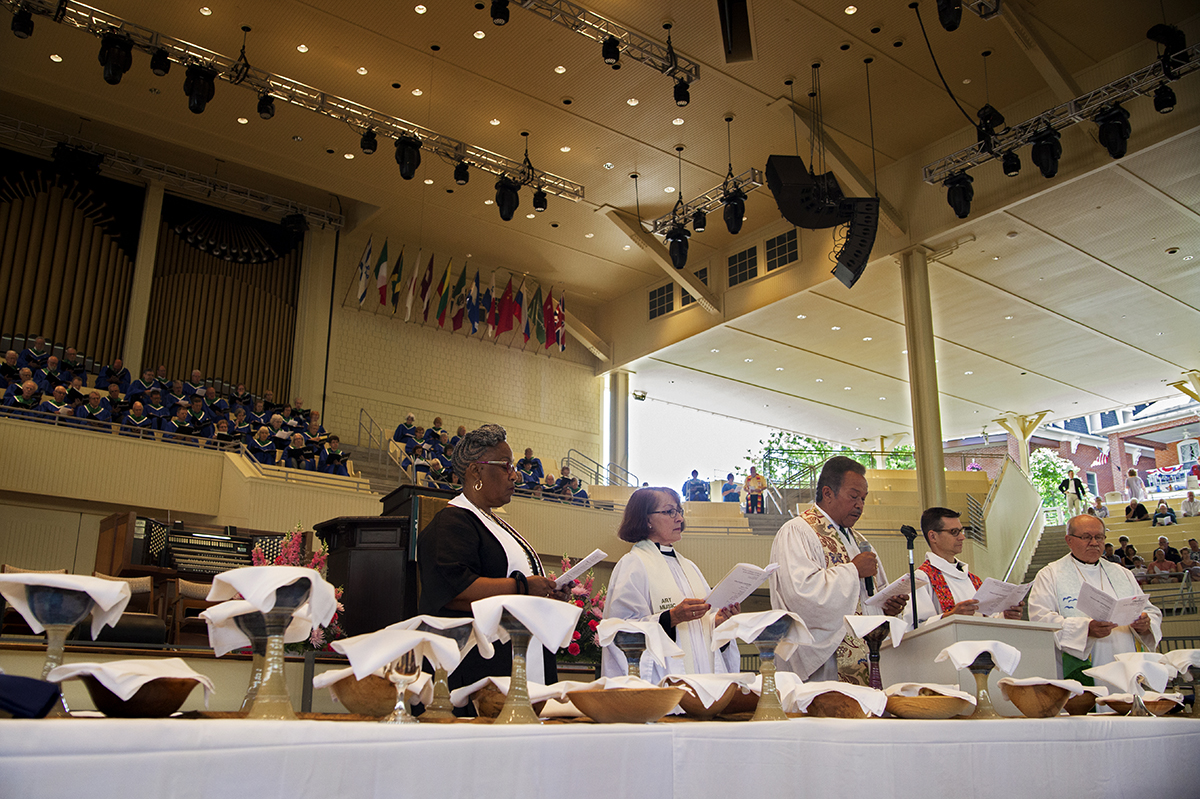 “You may not agree with everything you hear this week,” Michael E. Hill, president of Chautauqua Institution, told the Amphitheater crowd at the beginning of Monday’s morning lecture, which began a weeklong exploration of the theme “A Crisis of Faith?”

That was probably an understatement, given the boldly provocative nature of the week’s lectures and symposia sponsored by the Institution. The program was designed to foster dialogue by asking what effect shifting religious norms have on other aspects of public life.

‘There is so much to learn from each other.’

The first lecture, by the author and journalist Andrew Sullivan, got things off to a compelling start. Sullivan is brilliant, conservative, gay and Roman Catholic. Unabashedly.

“The most radical thing you can say today is ‘I’m openly Christian,’ ” he declared at the beginning of a soul-bearing account of his faith.

Sullivan grew up in an idyllic English setting, the son of Irish Catholics. As much as he loved the fields and gardens around him, he found profound solace in his local church, which “was different from the secular world of TV, shopping and school,” he said. And he found acceptance.

“People ask me ‘How can you be openly gay and Catholic?’ ” he said. “I am openly gay, because I am Catholic. The first person I ever came out to was God, and God accepted me as an open, flawed human being.”

Sullivan went on to describe how his faith had sustained him through the sickness and death of many of his friends and lovers during the AIDS epidemic, his mother’s struggles with bipolar disorder, his own HIV diagnosis and the ups and downs of a meteoric and sometimes controversial career as a public intellectual. He spoke of breaking free of an addiction to work and the internet and finding peace and grace through meditation and personal relationships.

“Jesus said: ‘Stop doing and start being,’ ” he said. “The most valuable thing on earth is our time. And the most worthwhile thing we can do is to be with each other.”

Sullivan clearly struck a nerve with the Chautauquans gathered to hear him, and who gave him a standing ovation.

“I thought it was thought-provoking,’’ said Dee Hoyt of Pittsburgh along the brick walk after the lecture. “He was honest and very genuine. I grew up Roman Catholic, so I could relate to it, but I became a Presbyterian when I got married. I’m more comfortable with the combination of the gospels and social activism. That’s where I find my home.”

“It was right from the heart,” saithe Rev. Chris Welch, the Catholic chaplain this week, outside  the Chapel of the Good Shepherd after Mass. “For him to share on that level of faith was really courageous. The individual faith story is important. It’s a topic that reflects the original mission of Chautauqua.”

“Sometimes, it looks like Chautauqua has become a very nice resort community,” added Welch, who ministers to parishes in Fonda and Tribes Hill, near Albany. “This is what Chautauqua is supposed to be about: sincere, face-to-face talking to each other.”

“I thought it took a great deal of courage to say what he said,” said Sylvia Dains of Bradenton, Florida, who, with her husband, Ron, manages the Catholic House across the street from the Amp and who listened to Sullivan’s lecture from the front porch. “I think we all live the faith we learn as children and find our way as we go. If you line up 10 Catholics in a row, you are not going to find two who live their faith the same way.”

“I attend a sharing group at home and it brings together people from all different backgrounds and nationalities,” she said. “Dialogue is important to not lock ourselves into one translation. There is so much to learn from each other.”

Later in the day, at the Hall of Philosophy, the legendary journalist Bill Moyers introduced Robert P. Jones, a leading religious scholar and the author of The End of White Christian America.

America’s shift in the last decade of the 20th century from a majority white, Christian nation to a nonmajority white Christian nation represents “the end of the era of cultural and demographic dominance” by the people who built America’s institutions — good and bad, from slavery to representative government — over the past nearly 250 years, according to Jones.

Jones cited a confluence of what he called the “Three D’s”: demographic change, declining birth rates among whites and disaffiliation from religion by more and more young people.

In 1990, he said, the rate of Americans declaring no religious affiliation was 6 percent, compared to 23 percent now. He blamed this widening gap on cultural arguments over science versus evolution, clashes over climate change and the acceptance or rejection of gay and lesbian people.

Jones and Moyers explored the relationship of these changes to politics in the United States and said that the past presidential election represented a stark choice between the America of the past and the America of the future, with “nostalgia” coming out on top by 78,000 votes. Jones noted that, when asked if the country was better off in the 1950s than it is today, two-thirds of Democrats said it was better, compared to two-thirds of Republicans who said it was worse.

The Q-and-A period following the discussion was passionate. And, as they wandered away from the Hall of Philosophy afterward, Chautauquans were still heatedly discussing the topic among themselves.

“I think he’s right on target, and the numbers back him up,” said Linnea Nelson, a Unitarian Universalist religious educator from Oakton, Virginia, after the discussion. “Looking at the statistics from the last 10 years about people falling away from faith is particularly troubling. I’m a very liberal, religious person, and I think, ‘How did this happen?’ I have two college and post-college age children, and there is a big chasm there. Our young folks are aware of what’s going on in the world, and they just aren’t buying it.”

Alan Midwood, an Australian who has come to Chautauqua six times over the past 35 years, said he was stunned by the revelation that so many young Americans were turning away from organized religion.

“I was very surprised, indeed, that America is going the way of Australia in this regard,” he said. “I thought more Americans believed in God. The ticking downward of young people is very interesting.”

Steve Tripp, from Detroit, said he did not doubt the numbers Jones cited, but wondered if his conclusion might be wishful thinking.

“I’m encouraged that he makes it sound like Trump is an aberration,” he said. “I hope he’s right, but I’m not convinced.”