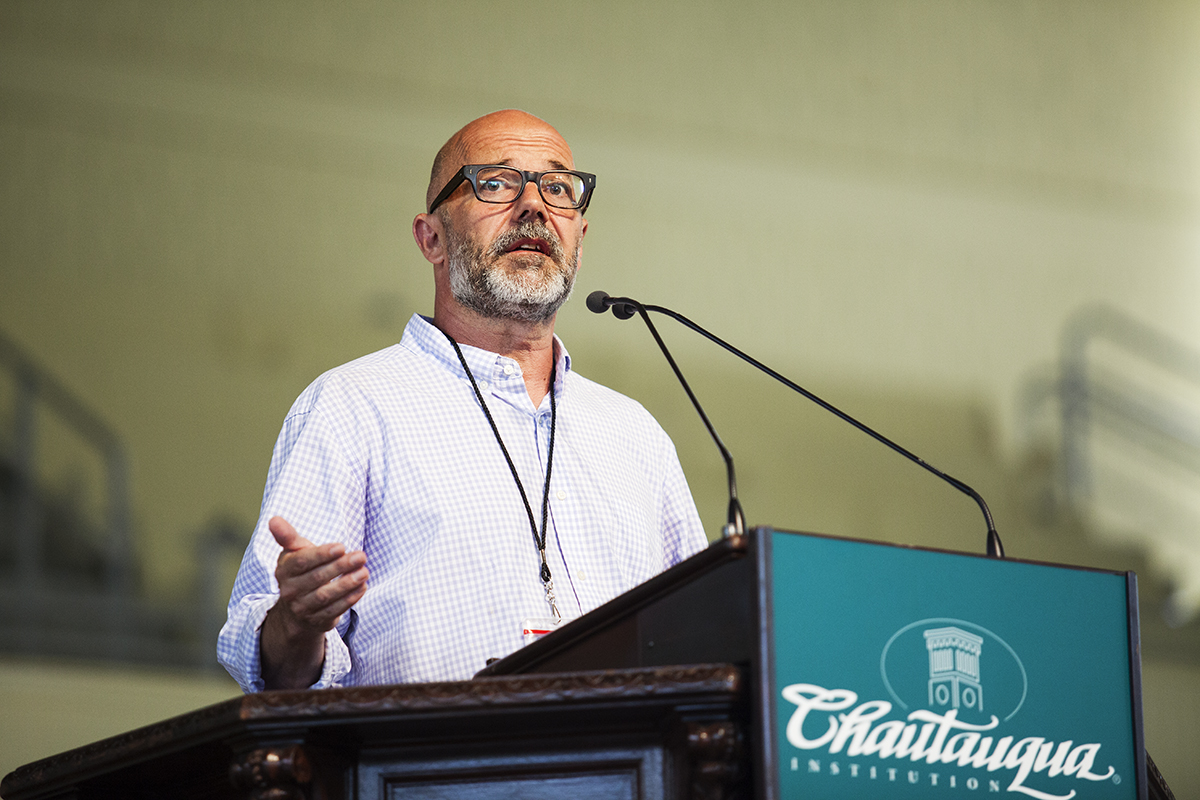 Writer Andrew Sullivan spoke about why he is a Christian at Monday's morning lecture in the Amphitheater on July 10, 2017. ERIN CLARK / STAFF PHOTOGRAPHER

Andrew Sullivan asks your forgiveness if he comes off as pious.

Faith is, after all, extremely difficult to talk about. And Sullivan is “the last person on earth who could be understood to be pious.”

Speaking Monday morning in the Amphitheater to open Week Three’s topic “A Crisis of Faith?,” Sullivan discussed a faith crisis of his own and the transcendent experience that ultimately helped him work through it. Author of The Conservative Soul and former blogger of “The Daily Dish,” Sullivan is an openly gay Roman Catholic and a self-described political conservative whose activism for marriage equality preceded the Obergefell v. Hodges ruling by more than 20 years.

Over the course of that career, the political landscape for a gay Catholic has shifted enormously. Sullivan once had to open lectures with a disclaimer about his sexuality; now, he has other concerns.

“There are many aspects of transgression, and today on college campuses perhaps the most radical thing (I) can say is that I’m openly Christian,” Sullivan said.

Many young people cannot get past the “terrible things” Christianity has done, and in particular, find Sullivan’s religious and sexual identities contradictory.

“They look upon someone who might be a homosexual and also Christian as somebody who obviously needs psychiatric attention,” Sullivan said. “I’ve spent my life trying to explain why that isn’t true.”

A big reason for this intersectionality is Sullivan’s upbringing. Raised by “a Catholic mother and an extremely Catholic grandmother” in a rural southern England town, he grew up amid the natural beauty of surrounding woodlands and fields.

“For me, it was never a question that there was a God behind all of this beauty, that the flowers and the trees that I saw come to life in the spring represented something great,” Sullivan said.

His grandmother had grown up in “dirt and poverty,” and was barely literate. But in church she would “rattle through” the prayers; he saw in her face that she’d been transported, trance-like, somewhere else.

Sullivan, too, understood the sacredness of the dark and quiet church. And it was in its image of Christ, agonizingly crucified on the cross, that he came to understand the centrality of suffering to human life.

As his mother, who suffered from bipolar disorder, went in and out of institutions, this understanding gave him solace.

“It was only because I saw that God himself suffered, that (her disease) was not a mark that one should be ashamed of or frightened of,” Sullivan said. “It’s something one has to pull through in order to understand what it is to live.”

As Sullivan grew up, he experienced a handful of moments in which he, too, was “transported somewhere.” Walking through a garden of flowers that briefly seemed “eternal,” or hearing a rustling in the trees that slipped him “out of time” — it was in these brief, isolated instances where he felt what might be considered transcendance.

“That moment, that intersection of timelessness and time, is what I always associated with and identified with the presence of God,” Sullivan said.

They look upon someone who might be a homosexual and also Christian as somebody who obviously needs psychiatric attention,” Andrew Sullivan said. “I’ve spent my life trying to explain why that isn’t true.”

It is that same temporality that he experiences in the tidal pools of Provincetown, Massachusetts, a place where the marks of modern civilization fade away and the simplicity of nature is all that remains.

“That is my cathedral,” Sullivan said. “That is where I go.”

Sullivan’s identity as a gay man is not an obstacle to these spiritual experiences; they are “so much greater, deeper, wider, broader than the gender to which (he is) attracted.”

In fact, he is openly gay “because (he is) a Catholic,” not in spite of it. The call to tell the truth about oneself, to live with intimacy and love, necessitates such self-acceptance.

“The first person I ever came out to was God,” Sullivan said.

But for all his confidence in his sexual identity, not to mention his burgeoning career, he was not immune to the harsh realities of being gay in the ’80s and ’90s.

“When I walked in one day to the doctor, and he said, ‘Andrew, I’m afraid to tell you that you have HIV,’ it came as something of an extraordinary gut-punch,” Sullivan said. “First of all that I was stupid enough to get it, and secondly, I was gonna die.”

He was not the only one. Of the four men he dated, all four died; so, too, did his closest friend.

“I went to so many memorial services I lost count, and I was just 30,” Sullivan said. “And suddenly, all that I’d been taught to believe about God, all the beauty that I had come to absorb, all the peace that he had given me, all the rituals and spaces and sacredness that had given me strength, was confronted with the fact that these young men … were (met) not just by death, but by some of the most agonizing deaths you’ve ever seen.”

It was in these trying times, shortly after his own diagnosis, on his 30th birthday, that Sullivan set off for the Provincetown tidal pools in which he’d always found spiritual fulfillment.

Halfway there he collapsed.

“I’d never not believed in God, never; it’s not like I chose to believe, it’s just that I couldn’t not believe … I couldn’t look at the world and universe and say, ‘This has no meaning,’ ” Sullivan said. But there, for the first time, he “believed what (he) thought was the most viable alternative: that God is evil … not that God does not exist, but that the force behind the universe is here to hurt, to kill, to force suffering.”

And then, after a few minutes of this deep existential dread, he heard an intonation, sad and impatient and sympathetic and loving, saying his name: “Andrew, Andrew.”

And he got up.

This experience, and the profound impact it had on him, prompted Sullivan to go back to the Gospels. But out of any number of other lessons, one truth — epitomized by the symbol of the cross — stood out: that “the ultimate surrender (is) the ultimate achievement.”

Describing the story of St. Francis of Assisi, a wealthy man who gave up everything to live a life of asceticism and spirituality among lepers and beggars, Sullivan noted the importance of these experiences to facilitating spirituality.

Counter to that spiritual intimacy is what philosophers call the “deadliness of doing.” Moving from discrete event to discrete event, day to day, one forgets to do as Jesus encouraged and “start being.” Like in the parable of Mary and Martha of Bethany (Luke 10:38-42), an insistence on action over contemplation can waste one of the most valuable things a person has: their time.

The first person I ever came out to was God,” Andrew Sullivan said.

Sullivan said if this was all more vague than the audience had anticipated, it was for good reason. Claiming to know the truth about things as specific as theology or sexual ethics is the great failure of religions past and present, he said.

Biblical literalism, then, is “not just a form of madness but a form of enormous hubris.” With its contradictions, inconsistencies, errors and innumerable interpretations (not to mention the “game of whispers” through which it was written), to value the Bible’s words over its underlying truths is to treat it in a way it was “never meant to be treated.”

“We have to learn to treat Scripture with honor but without fetishization,” Sullivan said.

In that vein, it does not make sense to fear a subsumption of religion to science. The latter has merely upturned certain literal interpretations of Scripture, like those concerning the age of the Earth or the nature of evolution.

“Science has disproved nothing about the meaning of the universe,” Sullivan said. “It cannot. It is about a different thing.”

In an era when technology has, and continues to make us “gods on earth,” Sullivan said, Jesus’ call for humanity to be better and for people to love one another can provide guidance through the struggles to come.

“The stakes are now very, very high,” Sullivan said. “And they’re getting higher. And if human beings morally are going to be able to cope with their intellectual advance, if we’re going to be able to have the morality to actually wield and possess this kind of power, then we do need a moral revolution in our consciousness.”