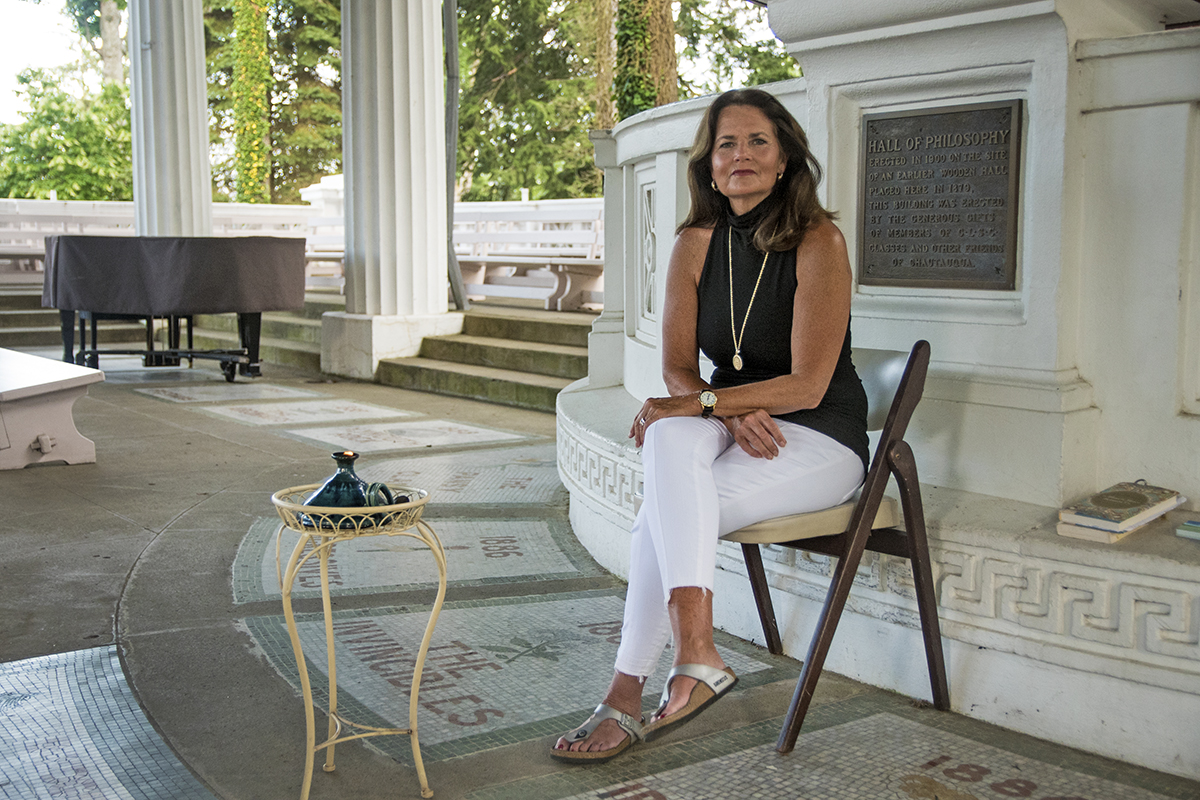 Carol McKiernan Thursday, July 27, in the Hall of Philosophy. McKiernan has led a Centering Prayer for the Mystic Heart Meditation Program for eight years.

As a child, she was attending Boys’ and Girls’ Club. In her teenage years, she was one of Club’s camp counselors for seven years. And today, all of her children have attended and been Club counselors as well. Carol McKiernan, a lifetime Chautauquan, is the face behind the Centering Prayer meditation.

“Centering,” a contemplative Christian prayer, occurs weekly at 7:15 p.m. Thursdays and 7:15 a.m. Saturdays in the Hall of Philosophy.

This practice was established at Chautauqua Institution when McKiernan, in her 20s, met with Subagh Singh Khalsa, director of the Mystic Heart Meditation Program. She was in search of a meditation fit for her, and since she was raised with a Christian background, Centering Prayer seemed to speak to McKiernan.

With its roots tracing back to Father Thomas Keating, a 93-year-old Trappist monk from Snowmass, Colorado, Centering Prayer was designed for lay people to implement “this ancient form of prayer.” The method is meant to strengthen all other types of prayer when practiced properly.

“In early Christianity, the desert fathers believed that through sitting in silence you could open your whole being, your whole mind and heart, to God, who, in other words, was called the ultimate mystery,” McKiernan said.

When 7:15 a.m. hits, McKiernan first lights a candle to establish a sacred atmosphere. She encourages every attendee to pick a sacred word for themselves, something to come back to if distractions arise, which are almost inevitable.

“Father Keating said to me that if he gets two minutes of silence in the 20 minutes, it’s a miracle,” McKiernan said. “We’re all kind of struggling here. It’s really nice to do it in a group because the group tends to build communities of faith and bond members together in mutual friendship and love.”

In other forms of meditation, she said, people tend to be more freeform about their posture, but Centering Prayer normally calls for a more upright, seated position. While participants get situated, McKiernan reads some kind of sacred literature, maybe a Psalm, then plays some kind of sacred music, maybe a song by Mormon Tabernacle Choir. After McKiernan rings a bell, everyone knows it’s time to be silent.

“We are very close with each other — the people that I do Centering with — even though we’re experiencing silence together, so we help to make each other accountable,” McKiernan said. “I think that the collective discernment of the group tends to be well-balanced, so we learn from each other’s experience.”

The practice, she said, is becoming more and more common in Catholicism around the world, but in order for it to stick, participants must “train this muscle to try to quiet itself down,” as Centering Prayer is, in a sense, “like going to the gym.”

McKiernan got the chance to flex her muscles on a 10-day silence retreat at Keating’s Colorado monastery, which was initiated by Contemplative Outreach, “a spiritual network of individuals and small faith communities,” according to their website. The group woke up and had approximately two hours of pre-breakfast silence every morning. After eating their first meal, silence would be initiated again until lunchtime. Even in these breaks, no one spoke to each other. The afternoons consisted of a block of free time, where McKiernan decided to meet with monastery professionals, including a private invitation to meet with Keating himself.

“It was pretty quiet,” McKiernan said. “I got maybe an hour a day of dialogue.”

She practices contemplative prayer because the ancient Christians advocated for it, calling it a gift. Through silence, they were able to experience “some kind of dialogue or relationship or deeper friendship with God.”

And no matter what someone believes, McKiernan believes they should have some type of practice that will “produce fruit.”

“I think that most people begin to notice a greater spaciousness and flexibility in their daily life,” she said. “I think what I mean by that is that you flow through life in an easier way. You pause before you react to things, and you’re more flexible and, in general, (it’s) a calmer way of living.”

For easy access to Centering Prayer, Contemplative Outreach designed an app, which includes a timer, Psalms and prayers. McKiernan wants to embrace this way of living as often as possible — when Chautauqua is not in season, she teaches Centering Prayer at St. Thomas of Villanova Parish and Villanova University and has led all-day Centering Prayer workshops in metropolitan Philadelphia.

“Even though I was raised in a very Catholic upbringing,” she said, “growing up with all the other religions right in our immediate midst here and playing on the grounds as a child in the ravine and all the other places here, I felt a sense of spirituality here at Chautauqua that I don’t feel other places as strongly as I do here.”