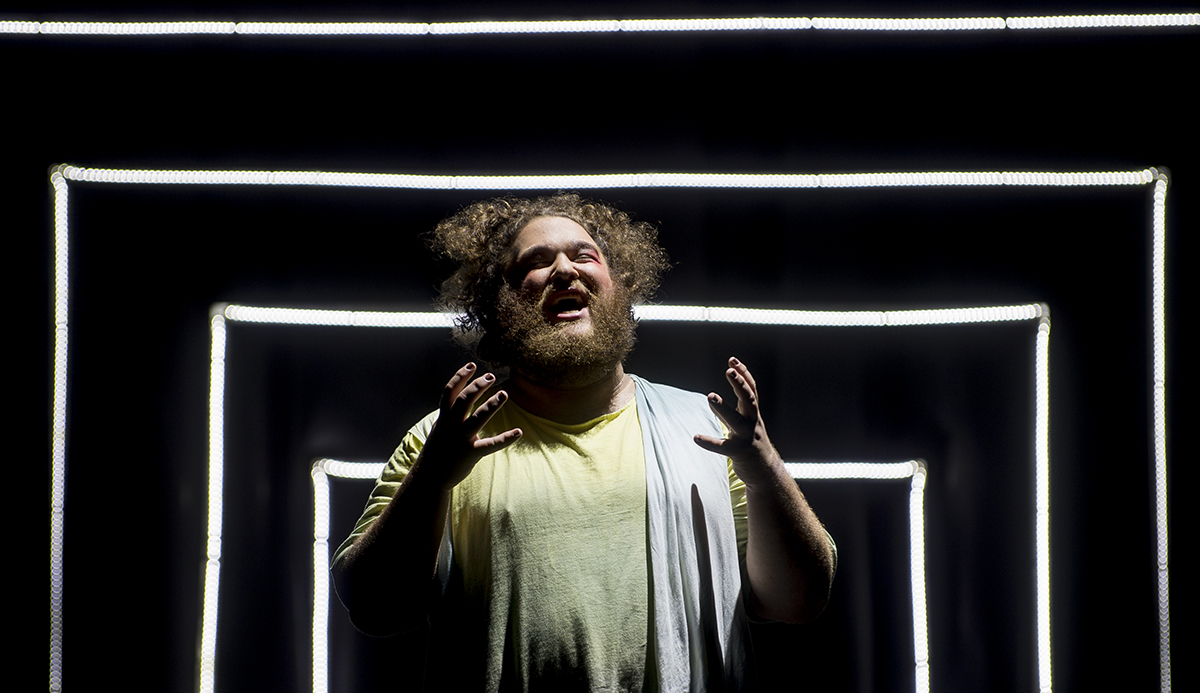 There was a quizzical look on Susan Harvey’s face as she spoke.

She started to speak again but halted and turned toward her husband, Paul, before falling silent. Her eyes danced in their sockets, searching the vastness of Norton Hall as she challenged herself to find an answer.

Hydrogen Jukebox isn’t very good at providing answers. But questions? It offers those in spades.

Following Thursday’s premiere, community members engaged in dialogue as they descended the front steps of Norton Hall. They discussed the production’s libretto (a collection of texts from 20 of Ginsberg’s poems), its score (a minimalistic, rhythmic and plodding series of movements by Glass) and its imagery (video projections offered by stage director Cara Consilvio that intensified the impact of Ginsberg’s words).

One thing they didn’t seem to get to, much like Harvey, was any sort of definite answer as to what they had just seen. According to Chautauqua Opera Apprentice Artist baritone Mario Diaz-Moresco, this was a trend within late-20th-century art, which moved away from narrative representation in favor of influencing a viewer’s personal experience with a piece.

“This piece is very much like that. There isn’t anything that tells you what to think about it, but it poses all these things,” Diaz-Moresco said. “Everyone’s going to have personal reactions to that.”

A sizable portion of these reactions can be directly attributed to the opera’s text. Glass’ insistent, almost subliminal, score creates a landscape across which Ginsberg’s poetry travels. At times, the poet’s words blaze across that landscape like a runaway freight train, plunging forward with fervor bordering on madness. At other times, the rhythm of Ginsberg’s words atop Glass’ score creates a hypnotic, meditative pool in which the audience is submerged.

These dramatic shifts actively fight against the notion of a traditional narrative. While common themes are apparent — war, consumerism, sex, drugs, government, death — the narrative arc could most aptly be described as individual snapshots of the human condition, which itself is anything but linear and sensical.

Whether those snapshots are delivered at break-neck speed or with reflective deliberateness, Ginsberg’s words fight ambivalence every step of the way.

“He didn’t want anyone to be indifferent to his poetry,” Daily guest critic Tom Di Nardo wrote in his Hydrogen Jukebox review. “You can vibe with it, be bewildered or even riled, but it surely leaves a powerful impression.”

In preparing for the opera, all six quickly realized that what they were dealing with was not something they were used to.

Consilvio’s staging placed the seven-piece instrumental ensemble — plus two synthesizers — onstage with the singers. She also made the decision to keep each of the singers onstage nearly the entire time, an occurrence that Wassenaar says hardly ever happens. Then there’s the text itself.

In many operas, Wassenaar said, there can be a lot of repetition where singers deliver the same phrase over and over. This means the amount of text to be learned isn’t all that large. But in Hydrogen Jukebox, that isn’t the case.

“There is exponentially more text in this piece than in any other opera (I’ve ever done),” Wassenaar said.

These elements caused the six to ask some questions themselves, but more importantly, they brought the singers together.

“We are truly an ensemble of players supporting one another throughout the entire show and the entire process,” Hassinger said.

That spirit of support could be felt on the steps of Norton Hall on Thursday as well, as audience members sought from one another the answers to the questions Hydrogen Jukebox asked.

Answers might not be found, and that can cause shake-ups and reactions. But isn’t that the point of theater in the first place?

“Whether you enjoy it or it leaves you questioning things,” Diaz-Moresco said. “You at least went to have yourself challenged.”