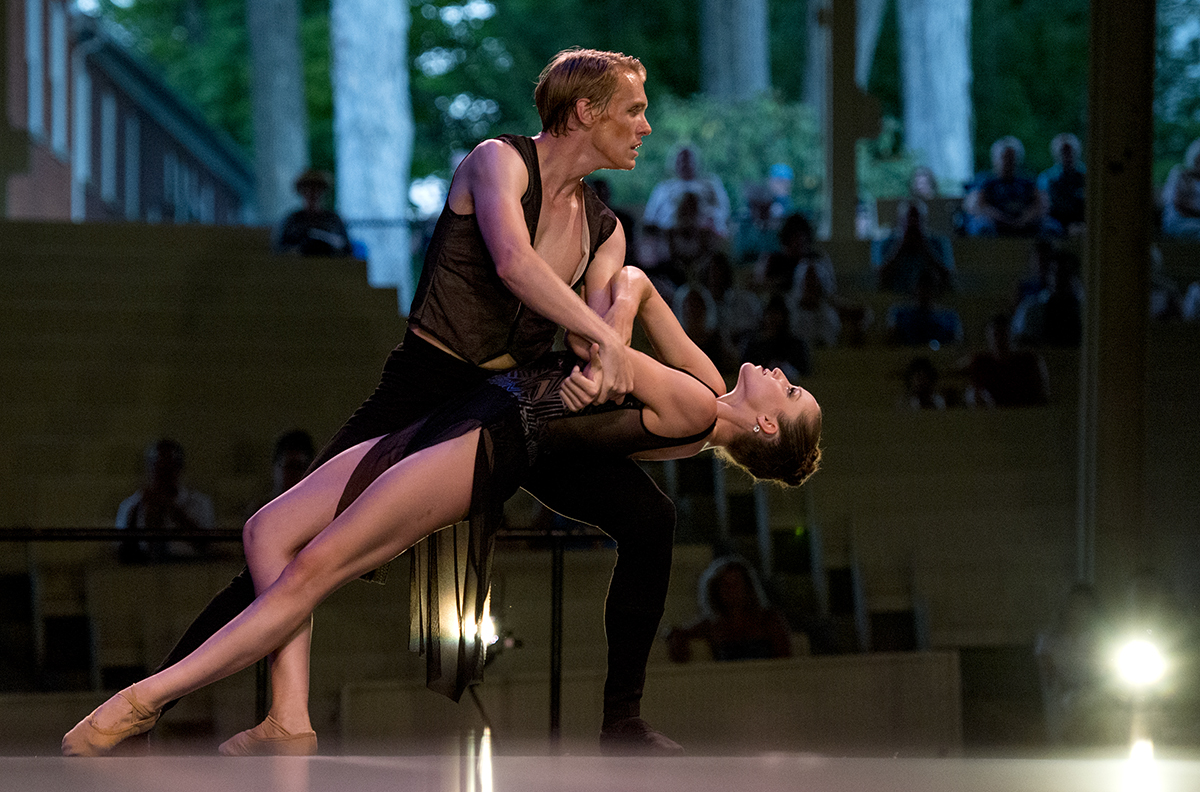 James Kopecky and Chelsea Dumas perform "You and I" with choreography by Sasha Janes during the Charlotte Ballet's performance, Dance Innovations, on Aug. 3, 2016 in the Amphitheater. SARAH HOLM/STAFF FILE PHOTO

Sasha Janes didn’t want to become a choreographer. Even after two decades’ worth of dance, he still had no desire to choreograph.

“I didn’t want to put myself out there and be exposed like that,” said Janes, Charlotte Ballet’s associate artistic director and director of the School of Dance’s contemporary studies. “I didn’t think I had much to say, and then someone gave me the opportunity.”

“I felt like, well, even if I suck at it, it’s going to be a good experience, to challenge myself, to push myself,” Janes said.

In 2013, The Washington Post deemed Janes a “choreographer to watch” in review of his work, “Rhapsodic Dances,” which was complete with tutus, tiaras and 900 yards of satin and tulle.

“It’s the first time that I’ve had an evening that’s just my choreography, so it’s rather intimidating from that perspective,” Janes said.

There will be pieces en pointe, in soft shoes, pas de deux, pieces that are more classical and others that are more contemporary. “Queen,” a pas de deux that will be performed by Chelsea Dumas and Ben Ingel, was inspired by a 1980s pop song — but whose music contains no pop at all. It seeks to answer the question, “What happens when a soldier says he will not fight for his Queen anymore?”

Dumas performed “Queen” two years ago at the Institution on a much smaller Amp stage.

“It’s bigger than what we’re used to, so it’s going to be an adjustment,” Dumas said. “But we’re really excited to use the stage and move more than we’ve ever had to move.”

She’ll also be performing in “Last Lost Chance,” a piece she first saw as a student over six years ago and aspired to be in. Dumas is heading into her fifth season with the Charlotte Ballet. She entered the School of Dance in 2011 after graduating from high school.

“I was amazed by the talent of the dancers,” Dumas said.

After a short stint studying and dancing at Indiana University, she returned to Chautauqua, set on pursuing a career as a professional dancer.

“I just saw the way that the dancers worked every day — that they could just dance, all day, every day — to me, that was just so inspiring,” Dumas said.

In 2012, she earned an apprenticeship with the Charlotte Ballet and officially joined the company in 2013.

Dumas, along with the  rest of the company, has been learning the choreography for “Saudade,” a brand-new piece that debuts Thursday. It includes performances by apprentice dancers and festival dancers, 13- to 18-year-old dancers studying at Chautauqua who will also perform with the Music School Festival Orchestra and in two Student Galas this summer.

“It’s very interesting to do a piece they haven’t done before and see what they bring to it,” Janes said. “They’re very collaborative, they come up with lots of ideas of their own and I give them a lot of freedom to express their own thoughts.”

Janes doesn’t have a formula for choreographing a piece. Sometimes, he works with the music first, then the movement. Other times, he does the opposite.

“The inspiration can come from anywhere,” Janes said.

He’s been working on refining his pieces, going back to change things he didn’t like the first time around, and making sure the narratives are clear because, as Ailey II’s artistic director Troy Powell said, “dancing is storytelling.”

“(Janes) really pushes you to really find the intent and the character behind each role that you’re doing,” Dumas said.

Dumas said she feels that Janes’ choreography is a “crowd-pleaser,” with a “wow factor to it,” yet the type of choreography to which the audience can still relate.

The term “dance salon” takes a page from the book of in-home salons: private, intimate gatherings that often featured a small concert or performance. Janes, under the guidance of Bonnefoux, said they used to get half-a-dozen dancers together with musicians, sometimes a soloist or pianist, and perform, often in places other than the Amp. The last time Janes remembers performing at the Institution with live music was in 2007.

Although Janes said Thursday’s performance departs from “the true essence of how it started,” he still tried to capture the spirit of intimacy within the different pieces. “Dominant Curves,” a piece originally performed by the Richmond Ballet, and “You and I,” an excerpt from “Sketches from Grace,” will also be performed Thursday. Janes will speak about his choreography during a pre-performance lecture at 7 p.m. in the Hall of Philosophy.