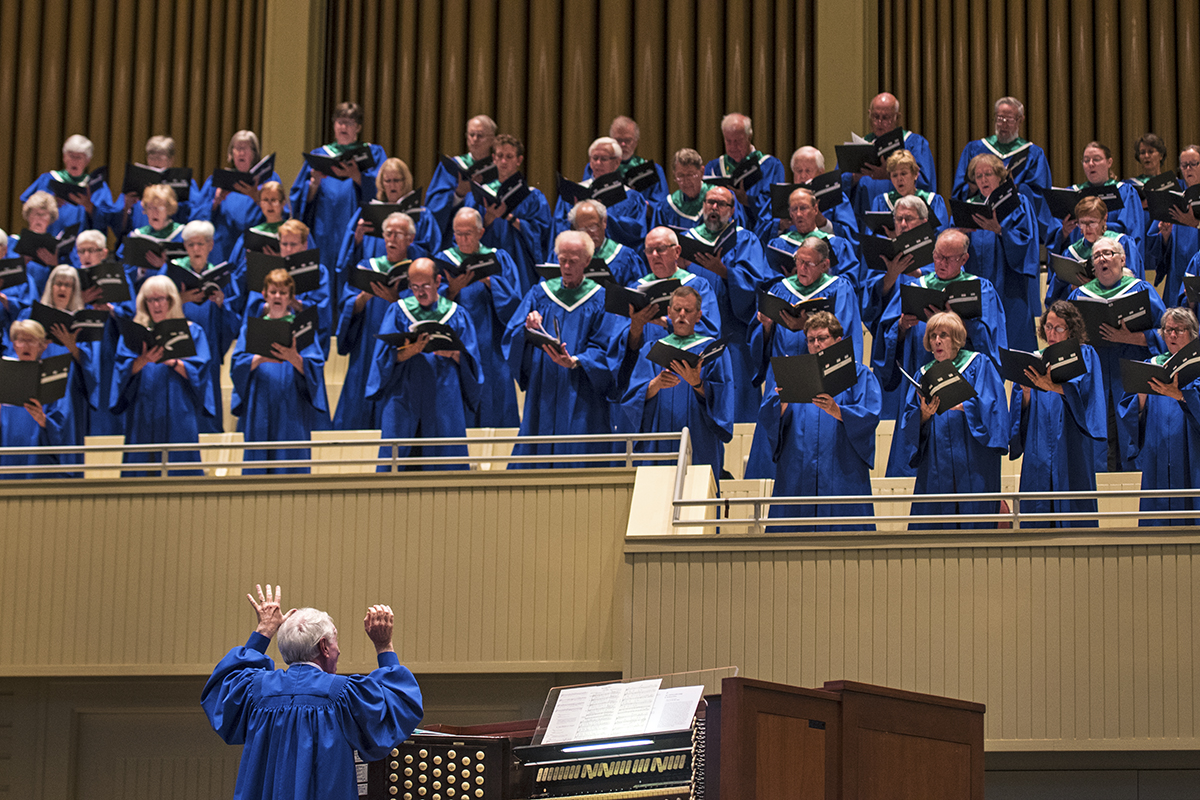 Jared Jacobsen conducts members of the Chautauqua Choir on Sunday, July 23 in the Amp. Sacred Song's theme was "Christmas in July," telling of Mary learning of her pregnancy from an angel. OLIVIA SUN/STAFF PHOTOGRAPHER

From the age of 1, Amy Marcy Cheney Beach could sing 40 songs from memory. By age 2, she could sing a countermelody to any melody her mother could sing.

But Beach, who was born in 1867, had to fight for her chance to compose and perform. Her feminism and talent will be honored during the Sacred Song Service at 8 p.m. Sunday in the Amphitheater. Beach composed a 27-minute-long piece, “The Canticle of the Sun,” for the Chautauqua Choir, which will be the centerpiece of the program.

“The problem was in those days there was no career for women in music because it was considered in poor taste,” said Jared Jacobsen, organist and coordinator of worship and sacred music.

Despite this setback, Beach was the first successful female composer of large-scale art music in the United States. She took a rocky journey to that accomplishment, though, Jacobsen said. Her parents prevented her from taking piano lessons at first, and when she got married at 18 — to a man 24 years her senior — her husband limited her ability to perform on stage.

There was also an incident, when she was in her early teens, that was representative of Beach’s obstacles and determination, Jacobsen said. She had the opportunity to perform with the Boston Symphony as a pianist, which was fantastic, but the conductor purposefully slowed down the last movement because he didn’t think she could keep up. Defiant, Beach sped it up herself.

“She sort of took control of the orchestra and tore into the last movement at the speed at which the composer intended it,” Jacobsen said. “And everybody was like, gasping at how she did that.”

Later in life, after her husband died, Beach was able to compose and perform relatively freely and made a name for herself, Jacobsen said. She was given the prestigious position of composer in residence at St. Bartholomew’s Episcopal Church in New York City, but very much enjoyed summer encampments, like Chautauqua Institution and the MacDowell Colony.

As such, while she was working at St. Bartholomew’s, she composed “The Canticle of the Sun” for the Chautauqua Choir. The work, however, didn’t come into Jacobsen’s hands until after her death, and he said he thinks it was first performed at the church. That doesn’t undermine its significance to him, though.

Although he is not yet sure what hymns will be in the program, he has picked out three of Beach’s works to be sung as anthems. “With Prayer and Supplication” and “Peace I leave with You” are the first pieces, both published in 1891 and only two pages long.

The third is “O Praise the Lord, All Ye Nations,” inspired by Psalm 117, that Beach created for the consecration of Phillips Brooks, the former bishop of Massachusetts.

“It has a lot of imagery of praising the lord with all that you’ve got in you,” Jacobsen said.