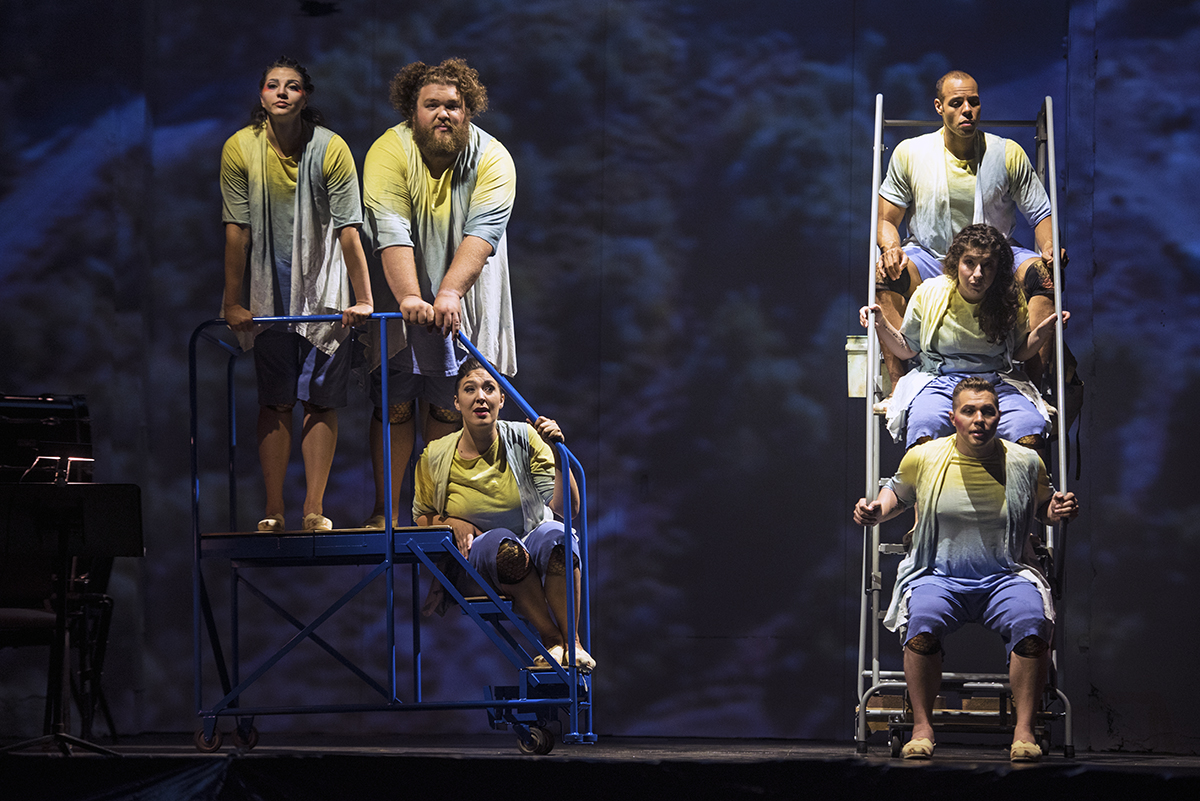 In May 1990, Stephen Colbert traveled home to Charleston, South Carolina.

In a story Colbert told his audience on The Late Show with Stephen Colbert, he took the weeklong trip to figure out what he wanted to do about his relationship at the time. His girlfriend had given him an ultimatum: marriage or a break-up.

When Colbert’s mother picked him up at the airport, he laid out his dilemma. She asked if he wanted to marry his girlfriend. He said he didn’t know.

“And she said ‘I don’t know isn’t good enough.’ And suddenly I had a week to kill,” Colbert told the audience.

That evening, May 26, mother and son attended Spoleto Festival USA and, upon entering the venue, Colbert noticed a woman across the lobby. She noticed him, too. The show ended, and they spent two hours talking at an after-party. Three years later, they married.

The show they had attended? The world premiere of the Philip Glass-Allen Ginsberg collaboration Hydrogen Jukebox.

At 4 p.m. Thursday in Norton Hall, the Chautauqua Opera Company will present this unique chamber opera under the stage direction of Cara Consilvio.

“It’s about living in this world,” Consilvio said of the opera. “It’s about relationships and love and ‘how do we as a human race move forward?’”

These themes arose, not unlike Colbert and his wife’s meeting, as the result of a chance encounter.

In 1988, the Vietnam Veterans Theatre Ensemble asked composer Glass to create a piece for them. As Glass started his work on it, he happened upon Ginsberg in a bookstore in New York City’s East Village. Glass asked Ginsberg if he would like to work with him on the piece. Ginsberg responded by pulling a book of his own poetry off a shelf and suggesting they use his anti-war poem “Wichita Vortex Sutra” as the basis for the piece.

“Allen and I so thoroughly enjoyed the collaboration that we soon began talking about expanding our performance into an evening-length music-theater work,” Glass said in Hydrogen Jukebox’s liner notes.

The resulting opera, according to Ginsberg, is meant to “relieve human suffering by communicating some kind of enlightened awareness of various themes, topics, obsessions, neuroses, difficulties, problems, perplexities that we encounter as we end the millennium.”

No small feat, and one that has proven to contain a large dose of timelessness.

“(Ginsberg’s) poetry is there forever, for whatever generation needs it,” Consilvio said in a previous interview with the Daily. “The way Ginsberg used words to resist … they can be used to resist in the same way today as well.”

The six Chautauqua Opera Apprentice Artists who will play the six roles the opera casts agree that the timeliness of Ginsberg’s poetry — while often viewed as idiosyncratic at best, profane at worst — is a perfect starting point for the conversations the opera is meant to spur.

“The whole point of this piece is not to agree with everything Allen Ginsberg says,” said bass Evan Ross. “We’re putting a slice of Ginsberg and Glass out there. What does that make you feel?”

For mezzo-soprano Natalie Rose Havens, initial read-throughs resulted in less-than-giddy feelings. But once she dug into the piece and began performing it, she found herself moved in surprising ways.

“I found myself weeping sometimes when I was singing this music because of how real this related to me on a personal level,” she said.

The unconventionality of Hydrogen Jukebox can make this emotional connection hard to locate, as Havens herself experienced.

Glass’ use of synthesizers in his orchestration and the creation of a minimalist score “marked a change in how he approached text,” Ross said. Glass took his style and made it about the text.

The text — a gathering of Ginsberg’s poems about politics, war, drugs, sex and the environment — creates a structure that, like Glass’ score, is unconventional. Rather than creating a traditional narrative structure, Consilvio said the poetry works to evoke an emotional response from the audience, with each song containing its own “mini-narrative moments.”

“It’s an experience about experience, not narrative,” Consilvio said. “It’s a real journey.”

However, it is the very unconventionality of this journey that, according to tenor Eric Wassenaar, helps make the opera such a beautiful experience.

“You could be feeling anything at any moment and then the next moment, something completely new and different takes you to another place,” he said.

Ross, Havens and Wassenaar will join sopranos Chelsea Friedlander and Helen Hassinger and baritone Mario Diaz-Moresco in the two-hour presentation Chautauqua Opera’s General and Artistic Director Steven Osgood has called “so essentially Chautauqua” in the dialogue that it is meant to create.

“This piece could not be more (perfect) for the Chautauqua community,” Friedlander said.

In an environment that President Michael E. Hill reminds community members is a place to exercise and strengthen civil-dialogue muscles, Friedlander’s assertion is astute.

“You have to come on the journey with us,” Ross said, “and see where it takes you.”