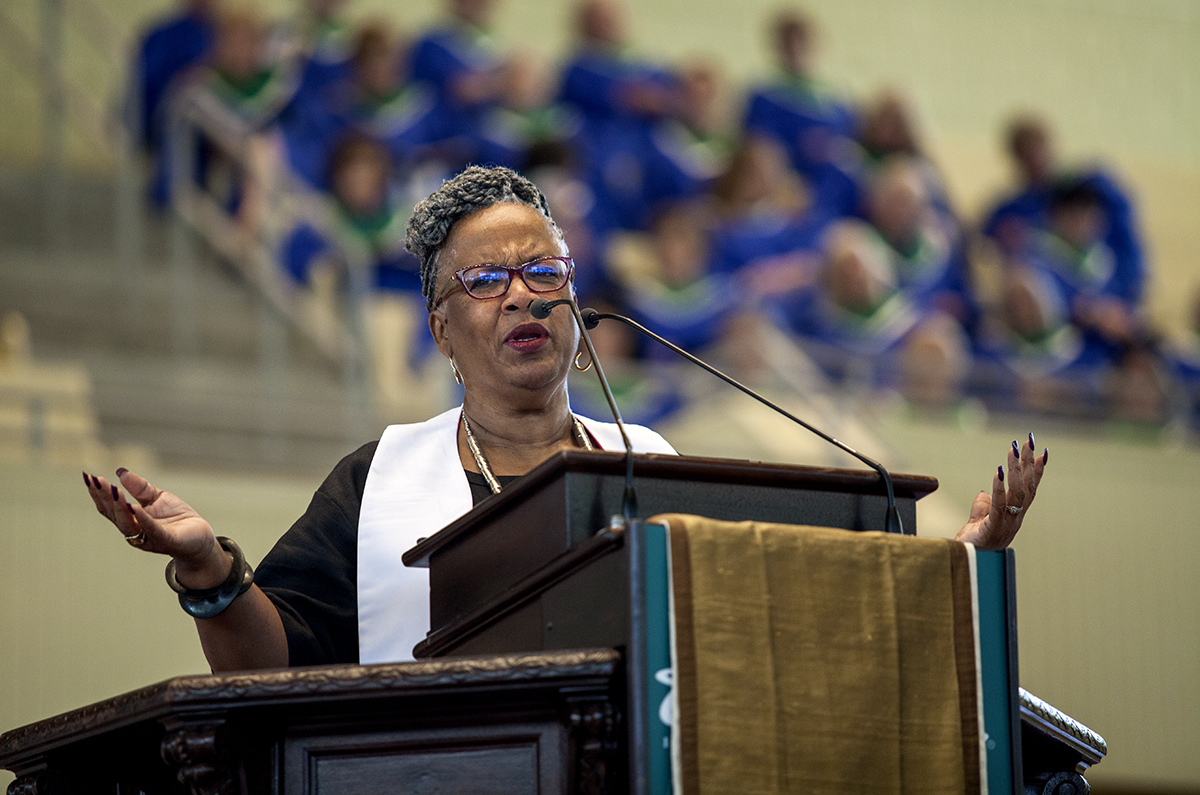 “In a world that is as divided as ours, there is still a critical mass of believers, even politicians, who are striving for the beloved community,” said the Rev. Teresa L. Fry Brown at the 10:45 a.m. Sunday morning worship in the Amphitheater. The annual ecumenical Communion was part of the Sunday service.

Fry Brown is the chaplain-in-residence for Week Three. Her sermon title was “Keeping Faith in Times Like These: On the Job Courage,” and the Scripture readings were 2 Samuel 23:20-21 and Matthew 25:31-45.

Be very sure, be very sure/ Your anchor holds and grips the solid rock

Be very sure, be very sure/ Your anchor holds and grips the solid rock.”

We are caught, she continued, in a DuBoisian double consciousness while others look on with amused contentment. Yet, there are those who believe that “justice for all” are not just words, and this is a land where we the people all have the right to life, liberty and the pursuit of happiness.

David, the king of Israel and the man after God’s own heart, was speaking in 2 Samuel at the end of his life. He was recounting the deeds of the warriors who had stood by him and one of them was Benaiah. In just two verses, the whole of Benaiah’s service, which put him at the head of David’s body guard, is told.

“David knew that he did not succeed without the help of others,” Fry Brown said. “They were just as talented as he, and in the face of danger they had the self-possession to do the job, they had courage. They did not try to be David, but they suffered with him and built the nation that God wanted.”

Fry Brown described Benaiah as a metaphor of courage; he killed a lion on a snowy day.

“We don’t know the reason why; God called him and he went,” she said. “God sends us out of a safe place and we wonder why. God said go and we had to go, and we have no idea what it will cost us.”

Lions are mentioned 135 times in the Old Testament and only the old ones ate people, she said.

“Our life journey will be to face lions, the lions that seek to kill and destroy us,” she said. “The lions that will critique us but will never get off the couch to to do anything. The lions that don’t pray but want us to pray always. The lions who would rather whisper lies and gossip about us than work with us, who want to stop you from doing the work God set you to do.”

God does have a plan for you, she said. God has given you everything to make changes, so why are you standing still? Life can become one big pit, and you can get killed in the pit by your own indecision, or your lack of self-affirmation.

Benaiah confronted the lion in a snow-covered pit.

“We have to realize that our teachers, our parents, our grandparents, our aunts and uncles, can only teach us so much; the rest we learn on our own,” she said. A snow covered pit meant it was a slippery day, a treacherous time.

But Benaiah did not give up; he did not avoid the hard questions. He believed that God would make everything right.

“Listen to that voice inside and innovate,” Fry Brown said. “Check your ego because change is messy and painful. As Gandhi said: You may never know the results of your actions, but if there is no action there will be no results.”

God promised to never forsake us, she told the congregation.

“Step out of the shadows,” she said. “God is still present even when we are tired.”

She recited a list of people God asked to do crazy things: Noah and an ark, Daniel in the lion’s den, David fighting Goliath, Elijah and the widow of Nain, who gave the last measure of her food to a stranger.

“If God is for us, who in the world can be against us?” she asked. “If God protects us, what will God do next? Who is bigger or better than God? I didn’t get an email saying he was on vacation.”

Use your activism when you are in the pit, Fry Brown urged the congregation.

“Go to your God-designated pit and kill lions,” she said. “You have God-called courage, all things are possible through God — courage, light in the midst of darkness courage.”

In “the community that values differing opinions, that has the mind to work together,” we can fight the unbeatable and speak truth to power, she told the congregation.

“With visionary power we can confront the lion,” she said.

As she moved to her conclusion, Fry Brown quoted “Wake Up Everybody” by Harold Melvin & the Blue Notes.

“It is time for on-the-job courage,” she concluded.

The Rev. Robert M. Franklin, Jr., director of the Department of Religion, presided. Cathy Nowosielski, co-chair of the Chautauqua Fund and a member of the Blessing and Healing Ministry team, and Michael E. Hill, president of Chautauqua Institution, read the Scriptures. Jared Jacobsen, organist and coordinator of worship and sacred music, directed the Chautauqua Choir. The hymn-anthem was “Upon This Rock,” by John Ness Beck. Peter Steinmetz served as cantor for the gospel acclamation “Joyful Alleluia,” by Howard Hughes. The Chautauqua Choir sang “As a Chalice Made of Gold,” by K. Lee Scott and Thomas Troeger, commissioned by the choir to honor Jacobsen on his appointment as its director in 2003. The music during communion was “Holy, Holy, Holy,” by Grayson Warren Brown, “O Sacrum Convivium!,” by Olivier Messiaen and “Communion Anthem,” by Donald E. Kellermeyer based on the hymn by Mary Artemisia Lathbury, “A Study Song For Chautauqua 1877,” commonly known as “Break Thou the Bread of Life.” The organ postlude was “ ‘Trinity’ Fugue in E-flat, S. 552” by Johann Sebastian Bach. The Carnahan-Jackson Memorial Chaplaincy and the Harold F. Reed, Sr., Chaplaincy provide support for this week’s services.

The Annual Ecumenical Communion was celebrated with the Rev. Robert M. Franklin, Jr., presiding. The Revs. Teresa L. Fry Brown, Virginia Carr, Luke Fodor and Bishop James Arends served as co-celebrants. The coordinators were Ruth Becker, logistics, and the Rev. Robert Boell, clergy and assistants. Bread bakers included Jean Badger, Gena Bedrosian, Doreen Gould, Barbara Halpern, Alison Marthinsen, Nancy Nelson, Anne Palomaki, Linda Stutz, Claudia Twist and Linda Wieland. The grape juice was donated by the Growing Co-Operative Grape Juice Company, Westfield. Many of the bread plates were created by the late Tom Obourn from trees found on the Chautauqua grounds. The set was completed by Chautauquan Bob Boehm in 2014. In 2017 he created three additional, dedicated plates for gluten-free bread. The matched chalices were created in 2005 by the Ceramics Studio at the Chautauqua School of Art under the direction of Jeff Greenham. Additional chalices were provided by the Baptist House, Chautauqua Catholic Community, Disciples of Christ, Evangelical Lutheran Church in America, Presbyterian Church (U.S.A.), United Church of Christ and Unitarian Universalist Fellowship communities at Chautauqua. The United Methodist House provided Bishop John Vincent’s personal chalice. Banners from many of the Christian denominations on the grounds were part of the opening procession.