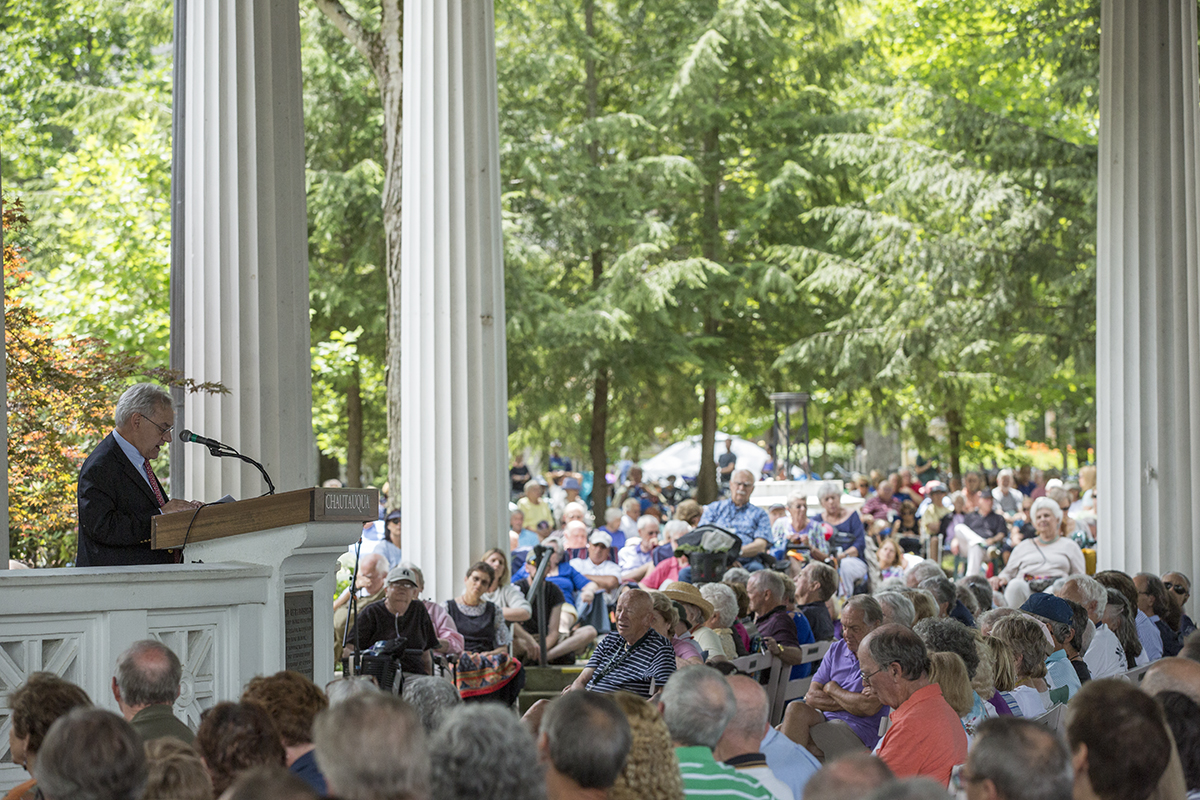 E.J. Dionne, a columnist for "The Washington Post," speaks to a full crowd about his “A Politics of Remedy, Not Resentment” lecture at Hall of Philosophy on Friday, July 7, 2017. CAM BUKER/STAFF PHOTOGRAPHER

During the 2016 presidential election, E.J. Dionne Jr. told NPR listeners he wanted a “Make America Empathetic Again” baseball cap. A week later, he was sent such a hat by one of his listeners.

Dionne, political columnist for The Washington Post and NPR commentator, wants America to have a little more compassion for itself. He spoke on this topic and many others to close Week Two’s Interfaith Lecture Series, “The Genius and Soul of a Nation,” Friday in the Hall of Philosophy, in his lecture titled “A Politics of Remedy, Not Resentment.”

Dionne began by acknowledging the nation’s ability to make a 180-degree turn — eventually.

“I love the idea of our country’s gift for self-correction,” he said, “and I think I shared this from this podium before my favorite Winston Churchill line, which is that ‘Americans always do the right thing after first exhausting all of the other possibilities.’ That’s not nothing.”

But America can’t always go through a trial period before buying a subscription to success. Instead, the country should practice what Dionne calls “sustainable cohabitation.” When explaining this concept, Dionne referenced Glenn Tinder, author of The Political Meaning of Christianity: An Interpretation, who said, “we have a need to both give and receive help on the road to truth.”

Dionne discussed the differences between patriotism and nationalism through the lens of the 2013 Boston Marathon bombing. In Boston, after three were killed and nearly 300 were injured, he said, “a sense of solidarity” within the community and “heroism within its citizens” arose.

“The worst Patriots’ Day in history produced an outpouring of local patriotism,” Dionne said. “In the Trump era, another impulse jostles with patriotism as the definition of our love for country.”

This other impulse is nationalism — something he said is often dangerous, with its associations with Nazism and fascism, and its “sweeping” claims.

“George Orwell once wrote that patriotism stands from a ‘devotion to a particular place and a particular way of life,’ whereas nationalism is ‘inseparable from the desire for power,’ ” Dionne said.

But patriotism, Dionne said, is not without fault. It does not have the ability to “sweep the less wholesome parts of our past under the rug.”

“I think it’s a mistake to view patriotism as nothing but chauvinism dressed up nicely,” he said. “American patriotism is special for the very theme of this week because the United States has proven itself to be a nation with an exceptional capacity for self-correction: from slavery to freedom, from segregation to equal rights, from the Gilded Age to the New Deal, from the subjugation of women to equality, from discrimination against our LGBTQ community to gay marriage.”

This “loyalty to blood and soil,” Dionne said, has encouraged those outside of the nation. During an April foreign policy conference, a man addressed the audience to tell them of his recent United States citizenship. The man highly revered the country over other nations because “they rejected what he called a monoethnic and monocultural definition of nationality.” He said America embraced accents, immigrants and inclusion.

Dionne reminded the audience that former President Franklin D. Roosevelt was quoted as saying, “Remember, remember always that all of us, and you and I especially, are descended from immigrants and revolutionists.”

“What a wonderful way to look at America,” Dionne said. “Reminding us that we are descendants of immigrants and revolutionists is a worthy project to every generation. But it’s an especially useful thing to do now when immigrants feel less than welcome and when our country is feeling less (than adventurous) in a social sense and in our battles for greater equality.”

American patriotism, he said, is a separate entity from the patriotism of any other country.

“We should take pride in our exceptional ability to absorb newcomers and also from their intense desire to be American,” he said. “American culture is made up of many cultures — regional as well as ethnic — but there’s also a national culture that we all share and shape. Our culture freely absorbs new ways of thinking, talking, making music, playing sports, cracking jokes and telling stories. But generation after generation, we create and recreate a uniquely American synthesis. The old and new interact and coexist.”

I think it’s a mistake to view patriotism as nothing but chauvinism dressed up nicely,” E.J. Dionne Jr. said. “American patriotism is special for the very theme of this week because the United States has proven itself to be a nation with an exceptional capacity for self-correction: from slavery to freedom, from segregation to equal rights, from the Gilded Age to the New Deal, from the subjugation of women to equality, from discrimination against our LGBTQ community to gay marriage.”

Dionne discussed the “dangerous form of nationalism” which could replace this, but said whether liberal or conservative, America always needs to be correcting itself.

This, he said, leads to a “politics of remedy.” The phrase, coined by American historian Arthur M. Schlesinger Jr., refers to the opposite of resentment. Dionne said one of the most “disruptive things to do in politics” is to hold onto problems without proposing solutions.

When he mentions this concept around friends, he said, they say he is “indulging in his Bobby Kennedy fantasy.” Kennedy, he said, was particularly talented at reaching out simultaneously to black and white Americans. To Dionne, this outreach is not a fantasy, though. It is a practical step for fixing pain.

This is where the “politics of slogans” comes into play. Dionne said fixing our pain needs to begin with the way politicians run campaigns. Instead of focusing on their own qualities, their advertisements tend to slander the opposing party.

The criminal justice system, Dionne said, is another area where America can fix its pain.

“Anybody in this room who either is or has been the parents of teenagers knows what can go wrong when teenagers go out at night,” he said. “But when your fear is not simply that they will do something foolish, not simply that you might see a cop come home with your kid, but that your child might actually be shot, that should chill us all.”

There are several ways, Dionne said, these horrors could come to a close — better relations with the police and the community, for example. Americans, he said, “act as if ending over-incarceration is antithetical to fighting crime.”

The phenomenon of globalization is taking some people out of their comfort zones. They see rapid changes in technology, inclusion of people in the global labor market and the downward trending bidding war as directly affecting their livelihoods, he said.

This, then, has led to a sub-phenomenon of globalization: “neighborhood people,” who do not want to be “citizens of the world.” Rather, they are comfortable with their piece of the puzzle, or their own patch where they were born and raised or have adopted as their own. Economic change presents difficulties for them, Dionne said, because it can “disrupt and empty out the places they revere.”

“Liberals and conservatives are insufficiently appreciative of what makes neighborhood people tick and why they deserve our respect,” he said. “Liberals are instinctive cosmopolitans who long for the freedom of big metropolitan areas. Free market conservatives typically say that if a place can’t survive the rigors of market competition, if the factories leave, the people left behind are best off if they simply pack up and find another place to live.”