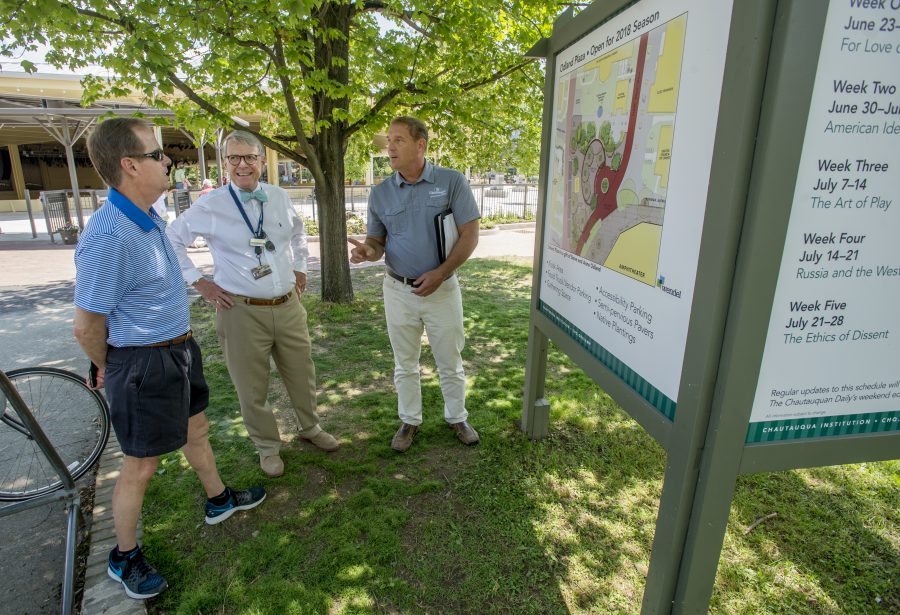 Steve Odland, left, meets with Chautauqua Foundation CEO Geof Follansbee and Director of Operations John Shedd at the future site of Odland Plaza July 5, 2017 near the Amphitheater. Odland and his wife Anne’s donation made the plaza possible. DAVE MUNCH/PHOTO EDITOR

The new Amphitheater stands as the gateway to the future for Chautauqua Institution. Now, thanks to philanthropic support from Anne and Steve Odland, this threshold will have its own grand entrance.

Originally introduced to Chautauqua by a friend, the Odlands have been coming every summer for more than 20 years.

“When we started coming, all three of my kids were very small,” Anne Odland said. “They made lifelong friends in Chautauqua, and that’s what kept us coming back.”

Anne Odland comes for the whole season while her husband, Steve, travels back and forth between here and their home in Washington, D.C.

“I like the fact that there’s a big mix of things to do. There’s something for everyone,” Odland said. “I also like that you have a lot of generations coming. We’re hoping that our kids will come back and, when we have grandkids, that they would come back.” 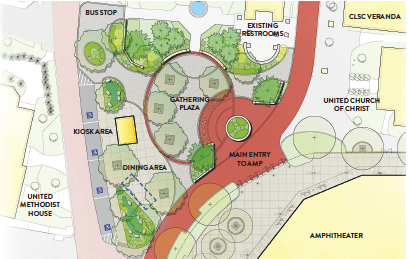 With the construction of the new Amp paving the way forward for Chautauqua, the Odlands were happy to partner with the Chautauqua Foundation to help improve the area around this integral landmark.

Odland Plaza will be a re-imagining of the area in to the west of the Amp between Pratt, Clark Brick Walk and the existing Roblee Garden behind the Smith Memorial Library. Thanks to the Odlands’ donation to the Chautauqua Foundation during the Promise Campaign, new pavers, more trees, planter boxes, rain gardens, space for a food truck and a redesigned gazebo will refurbish the current area to create a welcoming space that complements the new Amp.

“We are making this more of a nice grand entrance — a prelude to the Amp — but also a place where you could sit … and just have some snacks and conversation,” said John Shedd, director of operations and administrator of architectural and land use regulations.

Plans for the plaza began last year and construction on the project will begin following the end of this season.

“The reality is that the building of the Amphitheater itself took so much attention and there was so much uncertainty about … when the heavy equipment would move out of there that it just became impossible to think about (completing Odland Plaza) for this summer,” said Geof Follansbee, vice president of development and CEO of the Chautauqua Foundation. “It’s sort of a ‘coming attraction for the summer of 2018.’ ”

As well as changes in landscaping, the project also includes the redesign of the gazebo that provides headsets, various souvenirs and recordings of events.

“That function needs to continue, but that building … was built in 1982,” Shedd said.

Although designs for this new building have not yet been completed, Shedd envisions it will be an artistic feature of the plaza that should complement the new Amp.

“We’ve had discussions with all of the users of that building and have a program developed for what the design needs to be,” Shedd said. “It will be interesting to see what we end up with there because I think it’s going to be a neat artistic element that goes with Odland Plaza.”

The new building will sell souvenirs and recordings, as well as tickets and light snacks. Designs for the plaza also include allocating space for a food truck to provide additional refreshment options.

“It should be a nice space for the community to gather  a different space once it’s redone,” Odland said. “We’re excited about the project and can’t wait to see what it looks like when we get back next year.”

For more information on making a gift to the Amphitheater endowment, contact Geof Follansbee, CEO of the Chautauqua Foundation, at 716-357-6220 or foundation@chq.org.