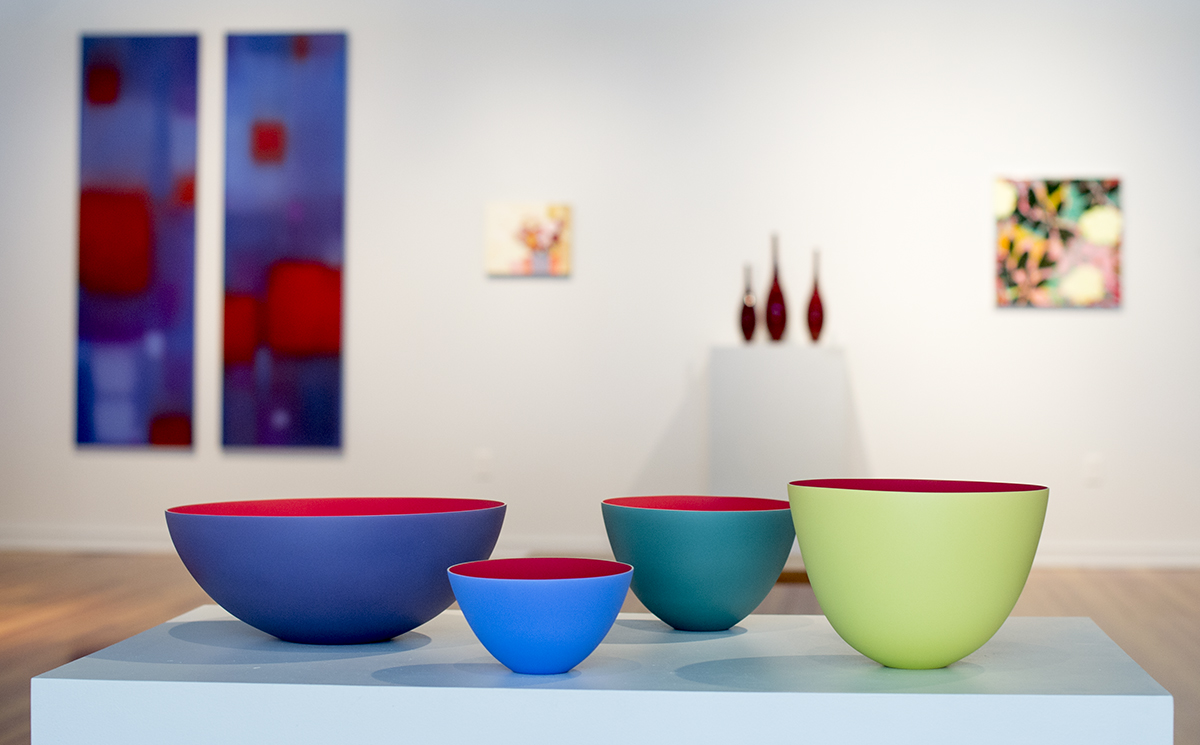 Judy Barie wanted to give herself a challenge.

Barie, the Susan and Jack Turben Director of VACI Galleries, isn’t actually that attracted to the color red, and yet she curated an entire exhibition focused on it.

“I was giving myself a little bit of a challenge to find things that were red that were interesting,” she said.

The exhibition “Conversations in Red” holds its opening reception at 3 p.m. Wednesday in the main gallery of Strohl Art Center. While all of the work by the eight artists represented incorporates the color red in some way, the inspirations behind their works encompass a spectrum as wide and as arcing as a rainbow.

“He was sort of the anchor for me of the show,” she said. “And then I worked from there.”

Jackson said his monochrome abstract paintings remind him of a fog or a hot, hazy day.

One of his pieces, a vertically stretching painting titled “Tadasana (Standing Rock),” references his yoga practice and the energy that radiates from a person’s spine when standing in Tadasana, the mountain pose.

While Jackson said he’s not usually political in his work, he dedicated “Tadasana” to the Standing Rock water protectors. That said, despite Jackson’s thoughts on what the work means, he said it has produced varying reactions from those who have seen it.

“I like abstraction because it provides an open-ended experience,” he said. “It’s not telling the viewer how to see or how to think.”

He’d like his work to evoke a sense of taking a walk through the woods, where a person can simply observe without expecting to be told anything.

“I prefer my work to be kind of like nature itself, without the baggage,” Jackson said. “You look at a flower, there’s no baggage to the flower. It’s a beautiful experience — that’s it. In our world, there’s enough glamour and there are enough narratives zipping around us all the time. It’s kind of nice to have points of contemplation that are quiet and have nothing to do with all that.”

Like Jackson, Leah Patgorski doesn’t aim for symbolism in her work. A Pittsburgh-based artist, Patgorski has several fiber wall pieces in the show.

Her wall pieces layer pieces of hand-dyed fabrics and repurposed materials. The shades range from pinkish to “straight-up red,” she said.

“I’m not really using red to symbolize something,” Patgorski said. “It’s more about the arrangement, how this big piece of pink looks with this little piece of yellow.”

Linda Price-Sneddon, another artist based in Pittsburgh, also likes exploring the interplay between colors. She has several works on paper in “Conversations in Red.”

“I’m very intrigued by binaries in life,” Price-Sneddon said. “I’m also very interested in complementary color relationships and the way that they can work together to really excite the eye.”

She created her pieces specifically for “Conversations in Red,” so she knew she needed to incorporate the color somehow, but she also had to bring her own style into the work.

“I sort of made it my own by exploring reds through greens, really,” she said.

Price-Sneddon uses Flashe paint, a vinyl paint with a matte finish. She chose it because the color is dense, heavily pigmented and durable. She can manipulate its effects to bring out a transparent texture or a thicker, more velvety look. While many artists begin a painting with some kind of image in mind, Price-Sneddon likes to first build up the background with a gradient or texture, and see where the paint leads her.

Darien Arikoski-Johnson’s trigger was mostly irritation. He was a graduate student at Arizona State University working on a digital art project when he experienced a computer glitch and watched his screen freeze and chop everything he was working on into unintelligible pixels.

“It was really, really frustrating,” he said. “But that was the sort of seed that got me to think about the relationship of human perception and how we’re perceiving the information via these screens.”

Arikoski-Johnson, an Atlanta-based ceramist, thinks about how digital devices are integrated into our culture. He combines various methods to create his porcelain sculptures: he hand builds, using slabs and the pinch and coil method to form separate pieces that he attaches together before firing. For their decoration, he makes digital decals on the computer, handpaints designs and applies glazes, some metallic paints that contain real gold.

“There’s a lot of interruption in my compositions, where it’ll go from one thing to another thing really abruptly,” he said.

He compared these interruptions to those so often experienced in the digital age: for example, in the midst of a face-to-face conversation, someone’s phone rings. Glitches even appear in the titles of his works. Some of those appearing in the show are “Abraaaasion,” “Just in the is Fleeting” and “Get to the, There’s a location on the left.”

Fortunately, there aren’t any glitches in “Conversations in Red.”