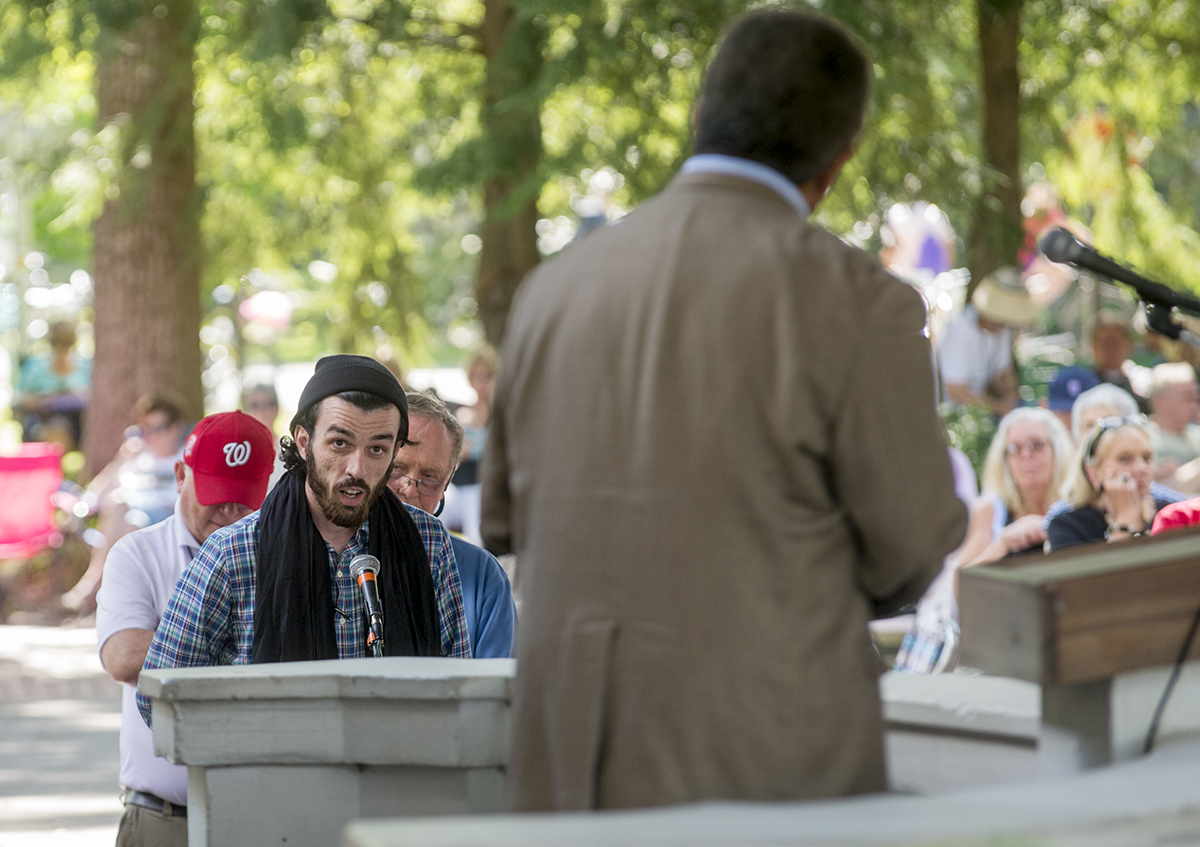 Editor’s Note: Daily staff writer David Geary has spent the week on assignment for the Department of Religion, providing dispatches from the field as the Chautauqua community wrestled with lectures and dialogues on the theme “A Crisis of Faith?” This report is the conclusion of the series.

“A Crisis of Faith?,” the theme of Week Three that featured provocative programming by the Institution, ended Friday with a town hall gathering of more than 500 Chautauquans in the Hall of Philosophy and the area surrounding it.

Bill Moyers, the journalist and author who moderated the week’s Interfaith Lecture Series, led a lively dialogue with members of the audience who reflected on the challenging lectures and discussions, and offered suggestions about how to use what they had learned going forward.

Before the town hall, Moyers summarized the the week’s highlights and ended with a story that he delivered with the fire of a Baptist preacher. He talked about the recent performance in the Amphitheater of Beethoven’s Ninth Symphony, with its soul-stirring fourth movement “Ode to Joy.” He spoke of how sublime, moving and elevating the music is, but warned “there are people who want to step on joy.”

He recounted how, while on an assignment to the African nation of Rhodesia in the 1960s while it was still harshly ruled by a white minority, he heard the familiar strains of the “Ode.” But the words were not the same. They had been rewritten by the racist government as a national anthem called “Rise, O Voices of Rhodesia.”

“It was the tune of an oppressive state,” Moyers said. “That’s the dissonance, that’s the conflict and that’s ultimately the resolution. We have to take a side.”

Afterward, Moyers was joined on the platform by Sherra Babcock, the Institution’s vice president and Emily and Richard Smucker Chair for Education, and the Rev. Robert M. Franklin Jr., the director of religion, all of whom took more than an hour’s worth of questions and comments from members of the audience.

“This has been a wonderful Chautauqua week,” Franklin told the crowd. “People have held lively discussion in religious houses and small groups, capturing the spirit of the week.”

Katie Eichenlaub White, a Baptist minister and longtime Chautauquan, said that over the last 20 years, three of the four pillars of Chautauqua — art, recreation and education — had thrived, while the four pillar, religion, “sort of stood over here, off to the side.” The week’s programs, she said, had reinvigorated faith as a core value of the Institution.

“This was the best week ever,” she said.

One after another, Chautauquans took to the microphones to echo her sentiments, make their own observations and to ask probing questions of what to do, practically, with the lessons learned. They were following the lead of earlier discussion groups organized by Maureen Rovegno, the associate director of religion.

Is there a crisis of faith or a crisis of faithfulness? Are denominations becoming watered down? Millennials feel disenfranchised; how can they be attracted back? How do people maintain their faith while still respecting and being open to people of other faiths or no faith at all? How do we hold a dialogue with people who hold political or religious beliefs that seem threatening or irrational? Should there be a Humanist House? Why are there so few Muslims in a community that prides itself on its respect for the Abrahamic traditions?

And there was a lot of constructive self-criticism.

Chautauqua is a utopia for white people, some observed. Diversity is sorely needed, both racially and religiously, they said, and everyone needs to feel welcome. How this can be achieved was the subject of passionate debate. Many noted that Chautauqua is an aging community. What can be done to attract young people? And others lamented that people from less economically secure backgrounds are not represented here. Are scholarships the answer?

A number of people suggested that fear is keeping Chautauquans apart, that getting to know neighbors is not always easy, that people are sometimes not friendly or seem to want to know only those they already know.

These were heady topics and profound, even unsettling, questions. But this, after all, is what Chautauqua is all about, has been since its inception and it has evolved, as a place to learn and grow, to create and have fun, to exercise the body, the mind and the spirit. The week devoted to finding answers to the question “A Crisis of Faith?” may have drawn to a close, but the dialogue is just beginning.