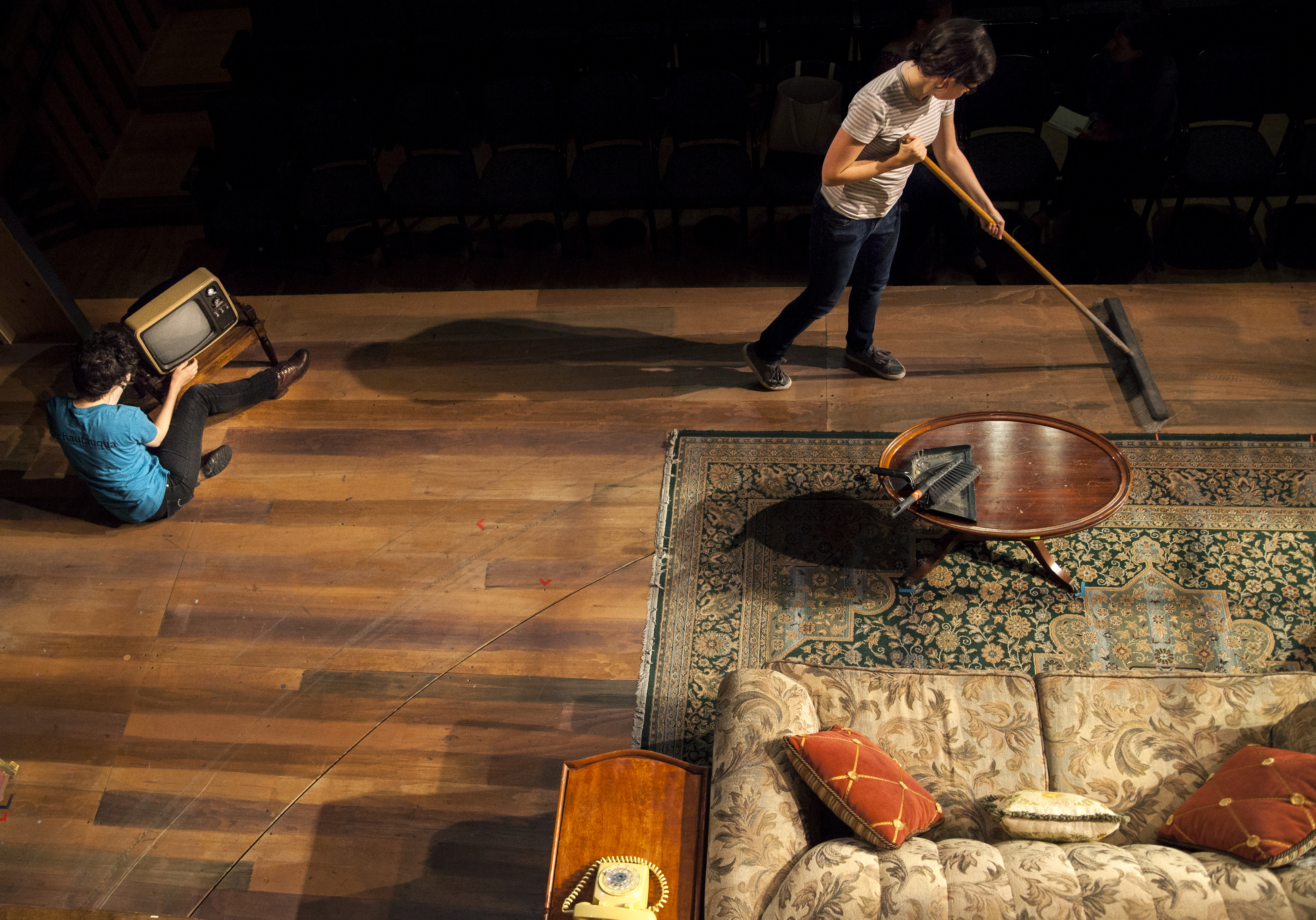 It’s 4:01 p.m. on July 7 when the exceptionally calm and soothing voice of Jenn Rae Moore comes through the backstage headsets at Bratton Theater to announce it’s time to start that day’s matinee performance of Noises Off.

“Have a good show, everyone,” Moore, the production stage manager, wishes the crew from her outpost in the booth high above the back of the house. (She climbed a ladder to get up there, along with the sound technician and lighting intern.)

If Moore doubts the show will go smoothly, there’s nothing to suggest that in her voice. And when something does happen minutes into Act 1 — a window pane falls out at the wrong moment during an actor’s exit — she momentarily sighs before making a note over the airways that maybe the actor can just exit through a door next time.

Chautauqua Theater Company’s season opener Noises Off, which plays at 2:15 p.m. Saturday and Sunday before closing, is a farce where things do go wrong. Most of the time it’s on purpose, since the play-within-a-play focuses on the hilarity that happens backstage and onstage.

“Inevitably, something’s going to happen, and so we just roll with it,” Moore said. “And this show, it’s actually easier than a lot of shows because that’s kind of the point of the show, that things are going wrong.”

Moore said sometimes it’s surprising that audience members don’t notice when things are truly going wrong because it seems so obvious to her. Earlier in the run, there was an issue when assistant stage manager Lauren Contard was behind the set, pulling a prop phone. The phone was supposed to break off in a character’s hand onstage, but the phone cord got stuck in the door.

“It wouldn’t come off, and of course we couldn’t tell him because he’s onstage and we’re offstage,” Moore said. “So he had to kind of roll with it.”

Although she had never worked on or seen the show before, Moore’s first thought upon hearing CTC Artistic Director Andrew Borba wanted to do the show was “that’s going to be a challenge.”

But that’s OK, Moore said, because stage managers like a challenge. She is one of nine people working the show backstage and has been with CTC since 2005. Beyond CTC, her recent projects have included serving as production stage manager for The King and I revival at the Vivian Beaumont Theater in 2015.

Her days often start with a morning meeting, either with CTC senior staff or to plan for the 2018 CTC season. If there are shows later in the day, she will run errands, like driving to Stedman Corners Cafe to buy a big bag of coffee for the staff, before arriving at the theater an hour and a half before showtime.

Actors are required to arrive 30 minutes before a show, while the production staff gets there a little earlier to test sound and lighting and do menial but important tasks, like vacuuming the set.

“Every cog is so important or the whole thing is just going to get jammed up,” Moore said.

With Noises Off featuring stage management characters, audiences are getting a reminder of how shows come together. When the set rotates following intermission between Act 1 and 2, there’s an audible gasp and applause from the audience as backstage characters Tim and Poppy hurry through resetting the stage and picking up loose wires.

Backstage, the scene is similar, except it moves much slower and without jaunty background music. Because the set features several windows, backstage crew members, who are dressed in black, crawl on the floor to add a fake broken sofa leg, hold a door shut or swap in a broken telephone that will be needed for Act 3.

Among those crawling around — or tossing a bag of potatoes down the stair to provide a sound effect of a character falling — is stage manager Jenny Kennedy. While it’s nice to be recognized, Kennedy said she likes to keep some of the stage magic unknown to the audience.

“It’s always nice when they know we exist, but it’s always nice to keep them a little bit in the dark,” Kennedy said. “As a theater practitioner, going to the theater has become a difficult thing because I watch for the magic, and every once in a while a show gets me, and I have no clue how things happened.”

At the end of a show, the Noises Off backstage crew prepares notes that will go to production manager Daniel Thompson and associate production manager Liv Scott, who have offices at Brawdy Theater Studios. Some days these notes reflect that everything went fine on a show, Thompson said. Other days, the staff learns about issues, like a crack in a set wall that happened when actors were rehearsing a fight scene.

Like Kennedy, Scott is someone who enjoys keeping a little mystery in her work.

“I actually sometimes prefer when people don’t know what I do, especially audience members,”  Scott said.

Set breakdown for Noises Off will start almost as soon as the last audience member exits the theater Sunday, the set for Detroit ’67 taking its place. But as the cast and crew prepare to wrap up Noises Off, some idea of the hard work that goes into backstage will hopefully linger for the season.

“I think people kind of recognize that there’s a backstage onstage,” Thompson said, “but there’s still a backstage.”