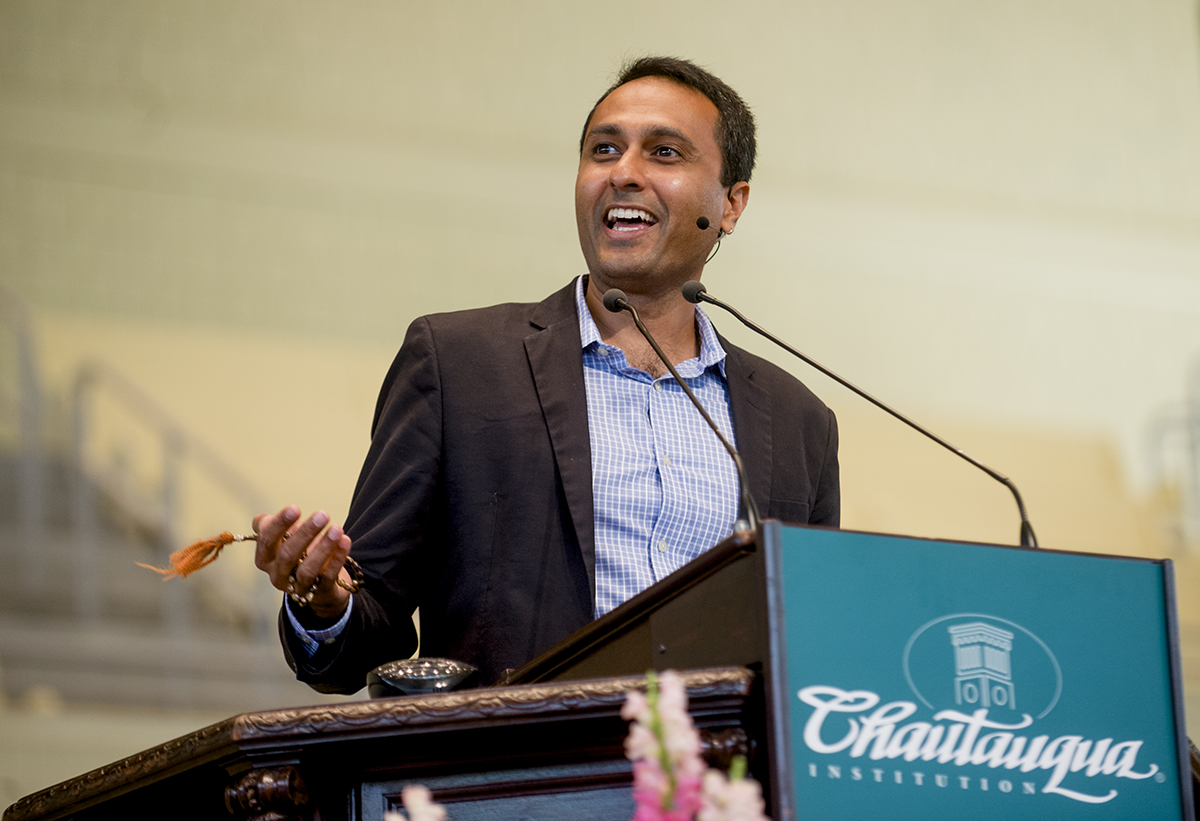 Eboo Patel started his Friday morning lecture with a parable.

“It is a story of a village that has come upon hard times,” said Patel, founder and president of Interfaith Youth Core. “A village that is starving, in which the inhabitants are huddled in their huts and homes, isolated from one another.”

The villagers have different accents; they speak different languages and even call God different names. They fear their neighbors.

The curious, hungry villagers come out of their homes, gathering around the stranger to ask her what she is cooking.

“We are making stone soup,” she replies.

But it isn’t ready yet. It needs some carrots.

“We’ve got carrots,” one family says. They go back to their home, retrieving carrots that had been carefully hidden from the other villagers. The traveling woman adds them into the soup, but it is still not ready.

“We need some potatoes,” she says, and is met with another family that had their own secret stash of potatoes. They, too, add their contribution to the pot.

This interchange continues, with more and more of the formerly isolated villagers throwing their spices and celery and so on into the pot, adding to their collective bounty.

Finally, the traveler has what she needs.

“I think it’s ready,” she tells the townsfolk.

The story is not just about a hypothetical village, of course. It’s about community-building. And in it, Patel sees echoes of the sociological work of Bowling Alone and American Grace author Robert Putnam.

“Putnam says, in all of the analysis he has done about diverse neighborhoods and cities in America, he has come to something of a challenging conclusion,” Patel said during his lecture in the Amphitheater, wrapping up Week Three: “A Crisis of Faith?” “That diversity, left unengaged, reduces community; it erodes social capital.”

Putnam’s research showed that people in diverse communities tend to keep their energy and generosity — the proverbial carrots and potatoes — to themselves. Voting rates and volunteer participation decline; trust, statistically speaking, decreases.

As sociologist and theologist Peter Berger noted, “modernity pluralizes.” Societies historically have tended toward homogeneity and isolation, such that when a strange new culture is introduced — say, a Jewish family starts attending a synagogue when all their Christian neighbors go to church — the dynamics of community are complicated “in astounding ways,” Patel said.

“The introduction of diversity means that a world and an identity structure that was experienced as fate … is now a world of choice,” Patel said. “That’s massively more complicated. … Institutions that once had a taken-for-granted status: the church, the college, Chautauqua … have lost (that) status. They have become voluntary communities.”

This upsetting of the status quo then “opens the door” to the distrust and fear that Putnam studied, and that kept the villagers hungry before the arrival of the traveler. A world with diversity becomes a more complicated one to navigate.

This is exacerbated by religious and cultural differences that actively conflict with one another, as with a Hasidic Jew who refuses to sit next to a woman on an airplane or a devout Jain vegetarian taken aback by Muslims feasting on fresh meats during the Eid holidays.

“The expressions of some identities are hurtful and insulting to other identities,” Patel said.

It is this religious diversity in particular that can be most difficult to mediate in a social context, largely because faith is uniquely preoccupied with what theologian Paul Tillich dubbed “ultimate concerns.” Matters as significant as what happens after death, or what a good life looks like, will by their very enormity cause belief systems to conflict with one another over differences.

“That’s religious diversity; now put that together with democracy,” Patel said. “What’s the definition of democracy? Democracy is a society in which you can make your personal convictions public. So all of these people, with their different and diverging and conflicting ultimate concerns, can get up on their soapbox or on the Chautauqua stage and share their view; they can start an organization that advances their ethical system; they can vote for a candidate that seeks to enact a law … they can run for office themselves.”

This ideological conflict, played out in the marketplace of ideas, for a long time convinced political philosophers that homogeneity was necessary for democracy to work; only a dictatorial empire could quash down the inevitable differences of faith.

“Except,” Patel said, “in the United States of America.”

The American experiment was, after all, fundamentally about religious pluralism in a democratic state. Like the traveling woman and her ladle, the Founding Fathers sought to create a social space in which it would be “easier for diversity to cooperate.”

But in order for leaders to create the spaces in which that can happen, they need three traits.

The first trait is vision. When the traveler looked at the starving village, she did not just see a starving village, after all: She saw the potential for community. So, too, Patel said, did America’s architects develop — as Marcel Proust would put it — “new eyes” with which to see not what the 13 colonies were, but what they could be.

Patel recounted an experience he had as a young boy when his father, a Notre Dame alumnus, took him to the Grotto (a shrine to the Virgin Mary) before a football game.

“I want to get to the stadium, but I don’t want to tell my dad I think that this Grotto thing is boring … so instead I invoke my Islamic learning,” Patel said.

Pointing out that Muslims “don’t do idols,” Patel asked if it was “potentially a violation of (their) tradition” to engage with the shrine. But his dad recalled a Quranic verse that called God “light upon light” — the same symbol illuminated by the candle-filled Grotto.

Diverse societies do not naturally live in happy harmony and mutually rich cooperation. People build that.

The second trait is a knowledge base. Had the traveling woman not had an appreciation for the diverse members of the town and what they potentially had to bring to the table, she would never have been able to bring them together and build community around the stone soup.

The same is true in real life. If leaders lack knowledge about the rich contributions to America that, say, Muslims have made — the compassion of the Quran, the poems of Phillis Wheatley, the syncretism of Southern Baptist churches, the athleticism of Kareem Abdul Jabbar and Muhammad Ali — then they lack the tools to build communities amid a sea of diversity.

The third trait is the ability to build these constructive spaces.

“(The traveler) did not just role up into that town and say, ‘Hey you fools, bring your vegetables to the center — I know you’ve got them,’ ” Patel said. “Our traveler was smart enough, clever enough, had enough craft to create a space in which it was easier for people to cooperate.”

These spaces in which intersectional dialogue can happen — places like Chautauqua Institution, Patel noted — allow communities to bridge gaps in their differences and instead appreciate the resonances.

Recalling another childhood experience in which his Muslim mother sent him to a birthday party with a sandwich bag of pork-free hotdogs, Patel noted the immense sense of solidarity he felt when he saw another kid at the party — a Jew keeping kosher — doing the same thing.

“I had no idea what a Jew was, but I’m like, ‘You and me, we are going to be friends,’ ” Patel said. “And honestly, I’m 41, (and) for the last 30 years of my life, my closest friends have been Jewish. … There is this sense from when I was young, this distinct sense of ‘You and I have something in common; something really important in common.’ ”

It is that sort of camaraderie that can be fomented within spaces like that of the stone soup. And it is interfaith leaders who, from congregations to college campuses, have the knowledge and skills to create those spaces.

“There are a lot of starving villages in America; a lot of people who are fearful of each other,” Patel said. “There’s a country that needs continual building.”

It is a sentiment pursued by America’s founders, and one captured in the poetry of Gwendolyn Brooks.