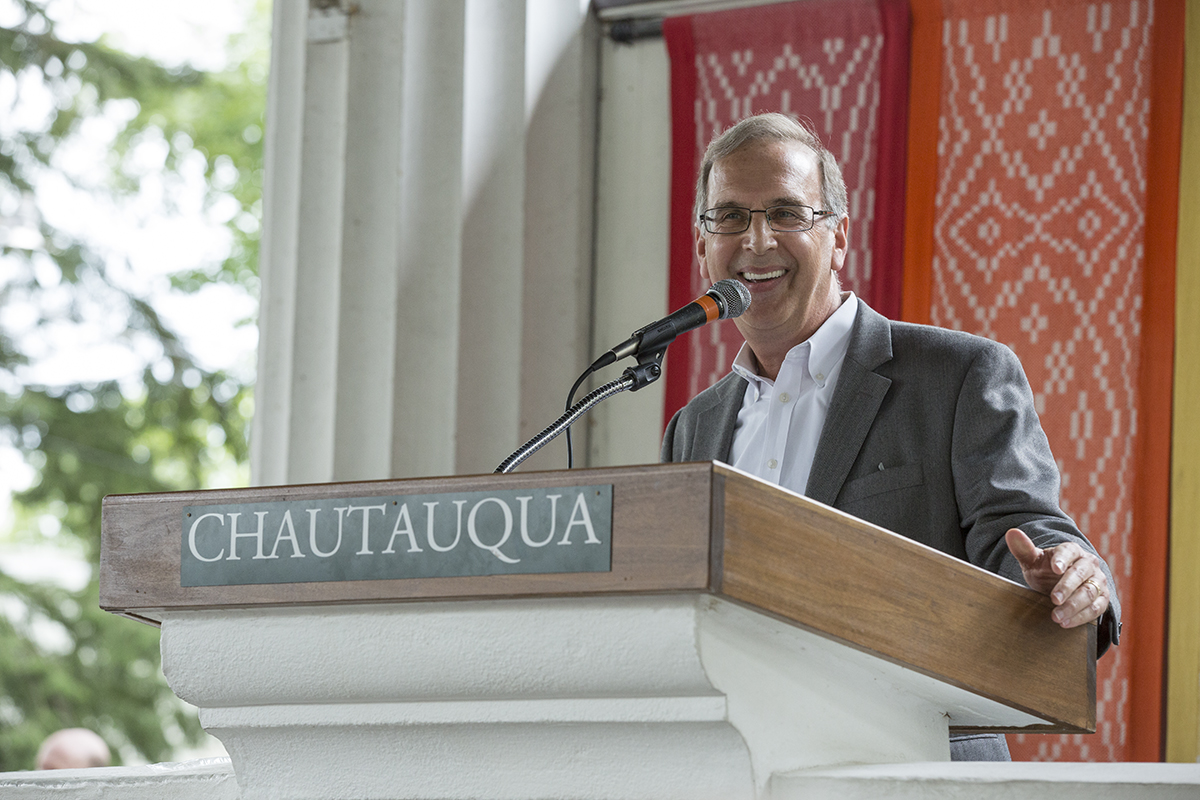 Rabbi Sid Schwarz talks in The Hall of Philosophy on Thursday, July 13, 2017 during the Interfaith Lecture. Currently, Schwarz serves as a senior fellow at The National Jewish Center for Learning and Leadership. CAM BUKER/STAFF PHOTOGRAPHER

Rabbi Sid Schwarz thinks even when the Jewish community is opaque in nature, millennials see right through it.

His lecture, titled “Religion, Identity and Communities of Meaning,” touched on this as part of Week Three’s theme “A Crisis of Faith?” Thursday in the Hall of Philosophy. He began with a solo lecture and ended with a conversation with broadcast journalist Bill Moyers.

“Calling you a journalist is like calling Michael Jordan a basketball player,” said Schwarz, senior fellow at the National Jewish Center for Learning and Leadership. “The category is correct, but it in no way conveys the level of virtuosity and excellence that Bill brings to his craft in telling the American story for many decades. And he brings it as well with a certain moral clarity.”

“What has united American Jews for the better part of their experience here in America are three things: the Holocaust, a sense of advancing social justice in society, and the state of Israel,” he said.

Especially post-World War II, Jews have been living a cautious lifestyle “deeply built into (their) Jewish DNA.” They have adopted a “never again” mentality, which was first defined as their refusal to let Nazism touch Judaism again, but has now broadened to be a rejection of poor treatment for all.

“Jews have developed a very finely tuned antenna to other people, other communities, other faiths, other races, who are facing similar circumstances in our own date and time,” he said.

“Calling you a journalist is like calling Michael Jordan a basketball player,” said Rabbi Sid Schwarz, senior fellow at the National Jewish Center for Learning and Leadership. “The category is correct, but it in no way conveys the level of virtuosity and excellence that Bill brings to his craft in telling the American story for many decades. And he brings it as well with a certain moral clarity.”

“Jews had to take a national culture and civilization and make it portable so they could travel around the world with it,” Schwarz said.

This portable Judaism didn’t result in a crisis of faith. It resulted, Schwarz said, in a “crisis of continuity.” While he was an American-born baby boomer, his father was born in Berlin and his mother was born in Poland. Their faith had a different face on it.

“For my parents, Jewish identity was not optional,” Schwarz said. “Their world was the synagogue, was activity with the United Jewish Appeal, was my mom being involved with Hadassah (Women’s Zionist Organization of America), with my dad being the president of the synagogue. That was the world they were comfortable with. That’s what they understood and who understood them.”

But he and his siblings experienced a different climate.

“For us, Jewish identity was optional,” he said. “There were no barriers to our entry to American society — thank goodness. And yet, what kept me tied to the Jewish experience and what solidified my Jewish identity were several experiences through my young adult years.”

These experiences — the Six-Day War in 1967, the Soviet Jewry movement and Freedom Sunday — chipped away at Schwarz little by little until he was sculpted into something more.

“It made me feel that I was personally standing in the narrative arc of the Bible,” Schwarz said. “A narrative arc that talks about the journey from slavery to freedom … I was experiencing God’s redemptive hand in history.”

However, for his children, now 28, 30 and 32, their formative years led to a different perspective. Israel was “no longer a source of unity, but a source of division.” For their generation, Judaism became much more “global than tribal.”

American Grace: How Religion Divides and Unites Us, written by Robert Putnam and David Campbell, is great proof of this. When examining the concept of “religious inheritance,” Putnam and Campbell discovered that only one-third of Jewish households successfully pass on the Jewish legacy to their children.

But Schwarz chooses to remain optimistic.

Despite millennials’ rejection of “tribal elements” of Judaism and the practices significant to their parents, their values still contain core teachings of the tradition.

Jewish “legacy” organizations, he said, just don’t measure up to these ideals. Traditional programs tend to resonate most with loyalists, those who have built the programs from the ground up and continue to maintain them.

“Millennials experience those institutions as having confused ends and means,” he said. “Millennials are very mission-driven as covenantal Jews, and they have no patience for institutions that are long on form and short on substance. They’ve had it with that.”

For my parents, Jewish identity was not optional,” Rabbi Sid Schwarz said. “Their world was the synagogue, was activity with the United Jewish Appeal, was my mom being involved with Hadassah (Women’s Zionist Organization of America), with my dad being the president of the synagogue. That was the world they were comfortable with. That’s what they understood and who understood them.”

Schwarz watched young Jewish people as they marched on the front lines with members of the Black Lives Matter movement and listened as they spoke about building urban farms.

“(They) take due note of the fact that often times, within four to five blocks of their churches and synagogues, there are three to four homeless people standing on the street,” he said.

This separation inspired Schwarz to lead “Kenissa: Communities of Meaning Network.” Where in America, a sign over a doorway would say “exit,” in Israel, the sign would say “kenissa,” or entranceway.

“Think about the Jewish experience as a large house with many rooms in it,” Schwartz said. “One, two or three of those rooms happen to be conventional institutions like synagogues or the (Jewish Community Center) or federations. … What doors are young Jews going to walk through if they’re not willing to walk through those conventional doors? They’ve been suspicious of the term ‘religion,’ and I’m not even fully sure they want to embrace the term ‘spiritual.’ ”

It fascinates Schwarz to experience chokmah, or wisdom — to be able to stand in front of his congregation and “engage in conversation with a 10th-century and 14th-century commentator” when reading traditional text. The next generation, though, is engaging far beyond the books.

Outside of chokmah, members of Kenissa are attuned to three other concepts — social justice, community and holiness.

“You wanna see where next-generation Jews are going?” he asked. “Follow their feet. They are actively engaged in all matters of social justice both domestically and internationally.”

The third theme of community, or kehillah, cannot be thrown around “cavalierly” in the synagogue any longer. Millennials want to dig deeper.

“The vast majority of churches and synagogues are actually transactional institutions where people pay a fair-market price for an array of … services,” Schwarz said. “Covenantal community is where people have expectations about being devoted in heart and mind and soul.”

And holiness, or kedushah, is the last element for an “effective spiritual community.” These communities tend to be hyper-focused on one element, rather than all four. This focus, Schwarz said, can make the community more accessible.

Schwarz saw that others agreed. In January 2017, Schwarz was part of an Austin, Texas, meetup that invited the leadership of 10 major, national denominations to participate.

“Why were they there?” Schwarz asked. “They’ll tell you how great they’re doing, but in the privacy of their own conversations, they know that they are dramatically losing market share, and you know that as well. They came here to say, ‘What are you guys seeing about the next generation that we need to understand because we want to save our ship.’ ”

America is having trouble embracing dialogue. Schwarz said there is a “growing partisanship and a divide and a paralysis of the American political system,” which leaves the nation coming up short when trying to define a common good.

“At a time when our technological capabilities are expanding exponentially, we’ve lost the talent and the ability to engage in acts of human compassion and friendship,” he said. “At a time when we need Dr. King’s beloved community more than ever before, we don’t have a clue how to create it.”

The fact that younger Jews are not joining congregations like those of their parents’ “does not mean that they’re not determined to find their own communities of meaning,” Schwarz said. “What we call a crisis of faith is less an indictment of the next generation than it is an indictment of our lack of imagination.”

When Schwarz was finished, Moyers said he didn’t want to “break the spell.”

However, he asked if when Schwarz said millennials are looking for meaning and purpose, those two elements were not necessarily tied to religion.