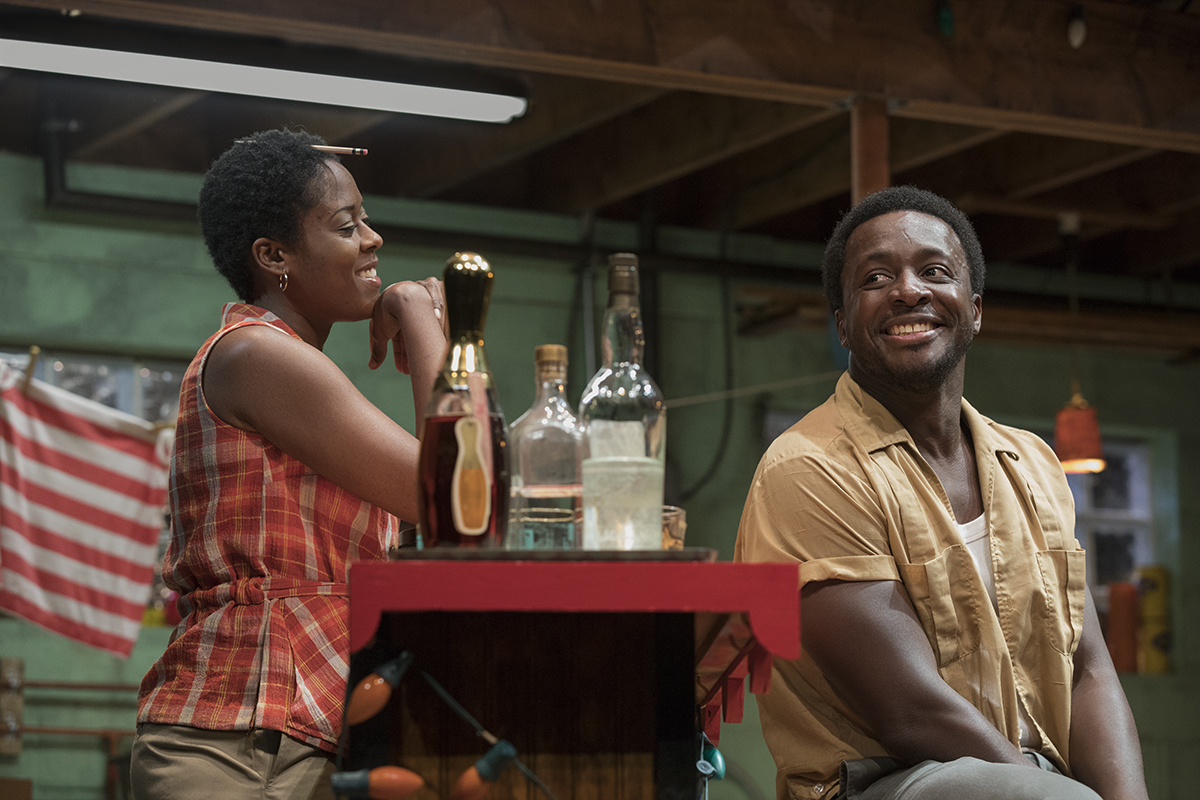 Moses Ingram as Chelle, left, and Andy Lucien as Sly, perform a scene from "Detroit '67" during a dress rehearsal for the Chautauqua Theater Company on Thursday, July 20, 2017 in Bratton Theater. Detroit '67 was written by Dominique Morisseau and opening night will be on the 50th anniversary of the Detroit riots. PAULA OSPINA / STAFF PHOTOGRAPHER

As Ray Defendorf took in Chautauqua Theater Company’s production of Detroit ’67 Tuesday night, he was transported back in time.

“We were in Rochester, New York, in 1964,” Defendorf said, referring to himself and his wife of 50 years and date for the night, Patricia. “The night of the Rochester riots, when they broke out, we were college students.”

Detroit ’67 finishes its run at CTC with shows at 2:15 p.m. Saturday, and 2:15 and 8 p.m. Sunday at Bratton Theater. Since the show opened last weekend, CTC has held post-performance talkbacks, not for audience members to listen to actors, but to participate in reflection. That’s what got Defendorf — along with several others — talking.

As Defendorf told those gathered, he and his wife were traveling with about 90 kids from inner-city Rochester to SUNY Brockport the night of the Rochester riots. That night, they were part of an interracial group. Meanwhile, back in Rochester, a race riot was taking place, and no one in the traveling party knew about it yet.

“A policeman stopped us and said, ‘What are all these black people doing here on campus?’ And we explained what it was, and he said, ‘Oh, I thought we had another Rochester,’ ” recalled Defendorf, who is white and had to ask the policeman what he meant.

What happened in Rochester then was not exactly what would happen in Detroit a few years later — and what serves as the historic backdrop to Dominique Morisseau’s Detroit ’67. But the play brought back those memories for Defendorf, a host for the Catholic House, and also had him rethink some of his own experiences.

“I came to a different perspective of something that goes back years,” Defendorf said outside the theater after the talkback session.

On Tuesday night, about three rows of dedicated theatergoers — a mix of Chautauquans and CTC professionals — stayed behind for the optional talkback, which included cast members and Matt Ewalt, associate director of education and youth services at the Institution. The session was led by Sarah Wansley, artistic associate at CTC.

“Turn to someone sitting next to you, maybe even someone you don’t know, and just take about two to three minutes to share something that popped for you in the show,” Wansley said to start off the talkback.

CTC Managing Director Sarah Clare Corporandy, whose work with the play is ongoing in Detroit, said her past experiences with Detroit ’67 made her want to offer Chautauquans the talkbacks.

One discussion that is ongoing — in the CTC community and back in Detroit — is whether what happened in Detroit should be called a riot.

The play begins on the eve of five days of civil unrest in 1960s Detroit, a time many African-Americans were dissatisfied with social conditions and a lack of progress, and there were growing tensions between the black community and local police.

On July 23, 1967, a police vice squad raided an after-hours club hosting a celebration for two Vietnam veterans. Both black and white residents reacted by setting fire to buildings and looting businesses. Dozens were killed and more than a thousand wounded as police, firemen, the National Guard and paratroopers responded.

“Rebellion,” “revolution” and “uprising” are all terms people have used to describe that historic July, said Marlowe Stoudamire, a Detroit native and director of the Detroit Historical Society’s ’67 Project.

“Before I started working on this project, the language that was given to me by my mother was ‘riot,’ ” Stoudamire said. “But after learning and really getting a clear understanding of how the language matters, I would go for ‘rebellion.’ Rebellion is an act of violence or open resistance to an established government, or a ruler, or an authority, but it’s an instant.”

“People get tired of the injustice, and so they rebel against the system,” he said, adding, “after football games they riot.”

For Moses Ingram, the CTC conservatory actor who portrays Chelle, the play has made her think of recent events in her hometown of Baltimore. In 2015, city residents took to the streets to respond to the death of Freddie Gray, a young African-American man, while in police custody.

“I don’t like to call them riots, I like to think of it as an uprising,” Ingram said. “We had one in Baltimore that was really, I mean, I had never seen anything like that in my life. I could hear the helicopters in my bedroom and tanks — tanks — on the street, and men in army gear walking the street.”

In CTC’s Detroit ’67, the production team brings this connection to current events home in the final scenes.

Projections designed by Katherine Freer appear throughout the production, but up until the final scenes the projections are black-and-white historic footage. During a final scene change, the video becomes vibrant and modern. Viewers realize they are watching footage from Ferguson, Missouri, when citizens responded to the fatal shooting of a young black man, Michael Brown, by a white police officer.

Corporandy, who prefers the term rebellion to describe what happened in her hometown of Detroit, said whether there’s a right answer to the question isn’t as important as having the conversation.

And that should be something Chautauquans know how to do.

“We should be conversating about this play for the next two and half weeks,” Corporandy said. “This place knows how to do that.”