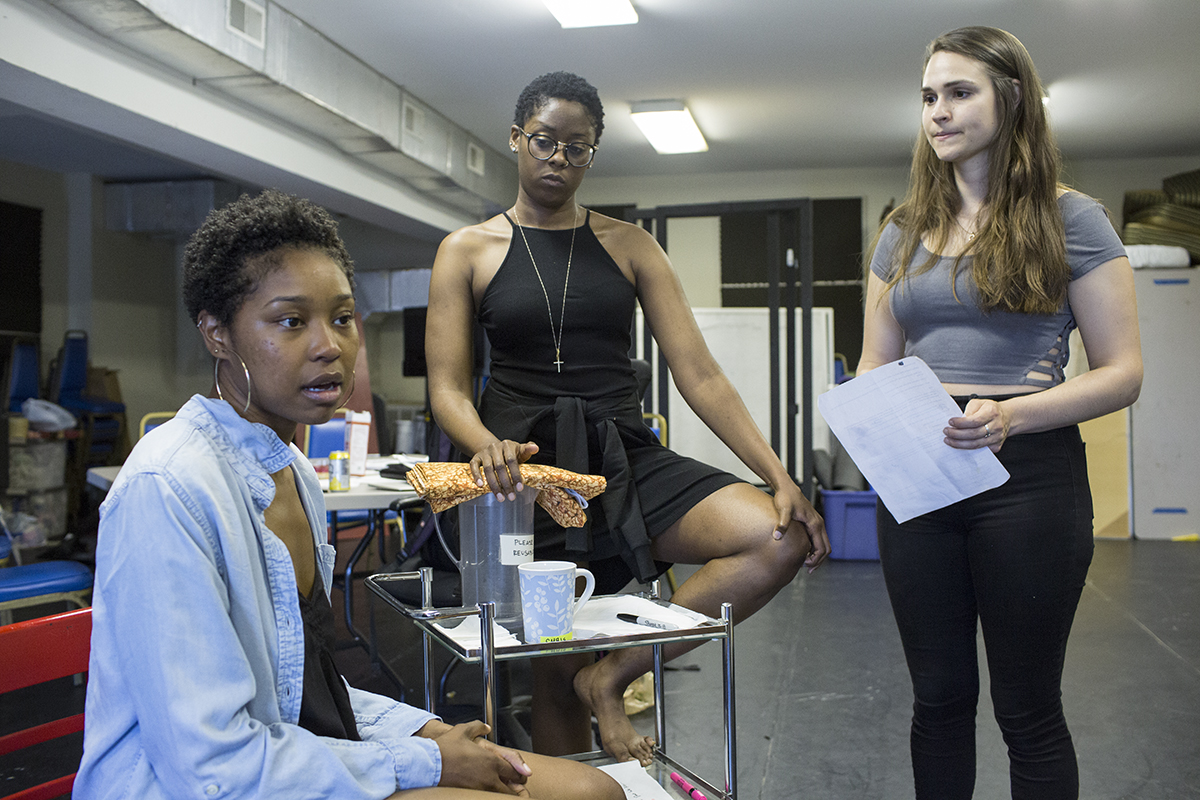 From left; Adrianna Mitchell, Moses Ingram, and Isabel Pask rehearse their lines for the “Community Engagement Project” held at Bratton Theater on July 4 and July 5. The new piece is created with and for the Chautauquan community. CAM BUKER/STAFF PHOTOGRAPHER

As a director with a passion for community-engaged theater, Ashley Teague said her work is a perfect fit for Chautauqua Institution.

“I love Chautauqua,” Teague said. “I also think that this work makes so much sense here because this is a place founded on civil discourse, so let’s make plays inspired by discourse to forward discourse.”

Teague returns to Chautauqua Theater Company this season to lead “The Community Engagement Project.” At 1 p.m. Tuesday and 8:30 p.m. Wednesday in Bratton Theater, Teague and seven CTC conservatory actors will present a new piece of theater inspired by interactions with the community surrounding the Institution. The event is free.

As the CTC conservatory directing fellow last year, Teague dedicated herself to a personal project. “The Community Engagement Project,” presented through CTC After Dark, focused on Chautauquans, their experiences and how they envisioned the community changing.

“It was so effective and so magical and so creative that we asked her to come back and do another one,” Borba said.

That’s not to say last year’s project didn’t go off without a hitch.

Teague remembered seeing one woman walk out between the second and third acts. That was especially disappointing, she said, because the woman missed hearing the forward-looking section of the piece on how the Chautauqua community was addressing its challenges.

After the performance, audience members were invited to add to the conversation by talking with Teague and the performers on the Bratton porch. The feedback was varied, and Teague plans to encourage people to join in the discussion again this year.

“Some people stayed and they were really supportive,” Teague said. “And a lot of people who shared their stories and saw them onstage found it really funny to see themselves portrayed. And some people stayed and said, ‘I don’t feel like you did justice to our community.’ ”

This year’s project focuses on bridging the space among the performers, community and audience. In the weeks leading up to the performances, Teague and seven CTC conservatory actors have interviewed community members, written scenes and formatted the show. The group spent time in a local bar, visited a nearby Hispanic cultural center and interviewed Institution employees.

“We really see ourselves as meeting community and then bringing that story forward to an audience to begin another conversation,” Teague said.

Teague usually works on similar community projects over 18 months, but due to the nature of this project arrived on June 19 and will be here through Friday. Although she is leading the project, Teague called it a group effort. Scenes range from a re-creation of an interview, to a personal monologue, to an original story.

Some people stayed and they were really supportive. And a lot of people who shared their stories and saw them onstage found it really funny to see themselves portrayed. And some people stayed and said, ‘I don’t feel like you did justice to our community.’ ” Ashley Teague said.

CTC conservatory actor Isabel Pask will present a monologue that draws on her own experiences as a Puerto Rican woman, as well as interviews. An informing experience was talking with two local Puerto Rican women who recalled meeting a white man mowing grass in their neighborhood. When it started to rain, the women gave him a ride home.

“At the end, he’s like, ‘This has been interesting. I’ve never talked to a Puerto Rican before,’ ” Pask said. “He had assumptions about what Puerto Ricans would be like based on the neighborhood where they were living in, but he was like, ‘You guys are really friendly, I didn’t expect to have such good neighbors.’ ”

CTC conservatory actor Jennifer Apple conducted six or seven interviews, chatting with people on and off the grounds who she said she otherwise would not have met.

She encouraged Chautauquans to attend the performance because it will challenge their views and spark dialogue, but also because they can engage with a piece that didn’t exist two weeks ago.

“It kind of brings humanity back to the plate and reminds us that we’re all people,” Apple said. “We all have stories, and everybody has a story worth sharing and listening to, and people actually really want to be heard.”