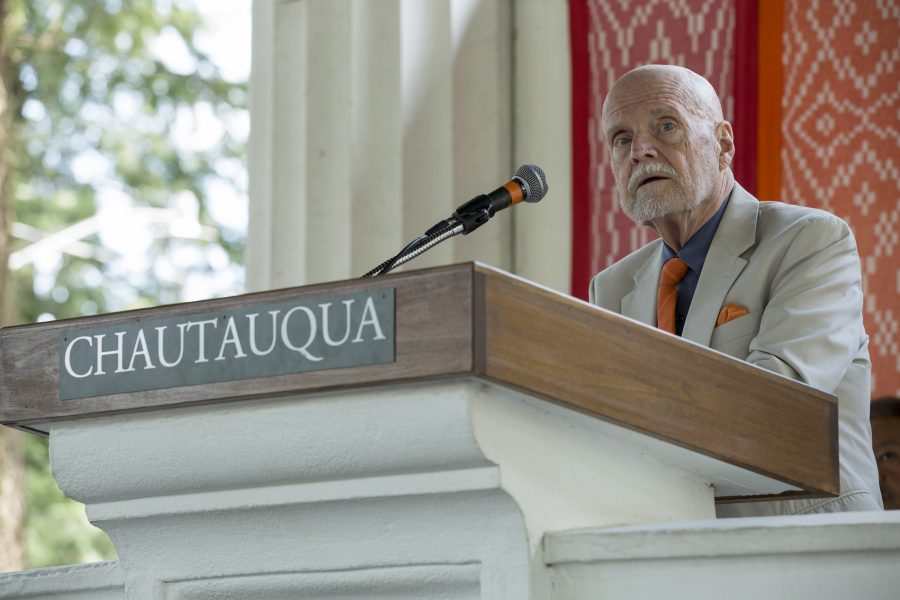 Larry L. Greenfield, Executive director of Parliament of the World's Religions, speaks in The Hall of Philosophy on Monday, July 17, 2017. CAM BUKER/STAFF PHOTOGRAPHER

Greenfield, executive director of the Parliament of the World’s Religions, addressed his concept of “religion craft” as part of Week Four’s Interfaith Lecture Series, “Religion and Statecraft Today: The Soft Power of Global Peacemaking” Monday in the Hall of Philosophy. His lecture was titled “The Reformation of Statecraft and the Craft of Religion: Reassessing and Realigning Power for a Global Community.”

“I can sympathize with those sentiments — for politics and religion are not small, incidental … and they certainly aren’t manageable dimensions of life,” Greenfield said. “Just the opposite: big, big and important and essential to human life. Not one you can confine to a few landmasses on the Earth, not limited to populations of the Earth, but ones that have to do with all peoples, really all creatures, on the whole, now what we know as an interdependent, planet.”

This planet, he said, will benefit from revitalization in craft — not newness in art — to make waves. Greenfield called craft something with defined order, whereas art is something with undefined birth. He wanted to know “what is at stake in reforming (the) elements” of politics and religion.

“Religious dimensions are internal to the sphere of politics: sometimes noble, most of the time manipulative,” Greenfield said.

Martin Luther, he said, modeled this reformation well in 1517. It wasn’t that Luther brought anything new into the political or religious spheres, but he renewed these spheres through Bible study.

Although Luther was excommunicated in 1521, his actions created change in the Christian faith and in political configurations. The impact, Greenfield said, was in both the crafts of religion and state.

Americans need a movement, he said, where unity is possible within differing church denominations, even though this has been a tall order for centuries.

“Wouldn’t it be wondrous if what might be achieved in the development of greater harmony and (statecraft) had these similar consequences?” Greenfield asked.

Religious dimensions are internal to the sphere of politics: sometimes noble, most of the time manipulative,” Larry Greenfield said.

This quote inspired three major questions in Greenfield about religious power today: Should the reformations now follow the same strategies of the 15th- to 17th-century reformations? Is the nation “condemned to the mixed results of that earlier period?” And does America have 500 years to make it happen?

“My answer to all three questions … is no,” he said.

Religious Americans would need to display “shared insight, shared understanding and shared action” and display a desire for religious diversity. And that doesn’t mean politics is off the hook.

But, Greenfield said, the nation has identified multiple sovereignties as its sources for wisdom — the infallibility of the Bible, the recognition of indigenous cultures and the universal and unending search for truth, to name a few.

Greenfield’s friend William Schweiker, the Edward L. Ryerson Distinguished Service Professor of Theological Ethics at the University of Chicago Divinity School, wants to make an appeal for “theological humanism,” the respect for religious human life, as the most ethical path to truth. H. Richard Niebuhr, Schweiker’s mentor, said that an “absolutely sovereign God made everything else relative,” Greenfield said.

“Any concept of any doctrine itself was relative, but in its relativity, also had a compelling consequence in the way doctrine influenced this ethics or behavior,” Greenfield said, quoting Niebuhr.

The embracing and confessing of a theological doctrine, according to Niebuhr, gave people resources by which to make their decisions.

“We need to start with issues human beings are faced with today, right now, in their human life — not just the privileged, not just the elite, but (with) attention being given to those who are powerless,” Greenfield said. “That’s where theology ought to start: with how we address the ethical issues (of) injustice, inequality, violence, hatred, peace, the sustainability of creation. If we start there, (Schweiker) wants to argue, we will have to contend with the fact that we are now engaged in what was once sacrosanct. That is doctrine itself.”

But religions today are contending with more diverse ethics than ever before, due to doctrinal justification of activities such as violence and inequality.

“The secularization of societies also contributed to the separation of religious identity to religious responsibility, or the weakening of deeply held religious beliefs and their ethical consequences,” Greenfield said.

Indeed, he said, religious practitioners must challenge themselves with rediscovery and reclamation within their own traditions. If people start small within their own denomination, tangible change will occur in this larger realm.

“Can we accomplish our reformations of religion craft and statecraft in ways that maximize the upside of change and avoid the downside of change? Can we? … Yes,” he said. “Will we? I have my doubts.”

Americans of the reformation, he said, need to make it clear that now is the time.

“Luther pulled it off with his effective use of the printing press and putting his vision in program and reform in the vernacular of the people. People could understand it,” he said. “Why can’t we do that?”

In a New York Times article titled “In Forsaking World’s Poor, U.S. Risks Rise in Conflicts,” Eduardo Porter writes of poverty, scarcity and inequality and their ability to fracture American economics. President Donald Trump requested a $52 billion increase in the Pentagon’s budget, which took away $26 billion previously planned for diplomacy and foreign aid in 2018.

“Now the question is: How many sermons yesterday had their starting point with that information?” he asked. “How many religiously oriented TV programs highlighted these facts? How many Facebook and Twitter entries from people of faith called attention to this article, pointed how it ran counter to the teaching of religious traditions? How many national and global religious organizations announced a concerted effort to lobby the president and the Congress against the proposed budget or rose up to challenge its highest priority: America first?”

The secularization of societies also contributed to the separation of religious identity to religious responsibility, or the weakening of deeply held religious beliefs and their ethical consequences,” Larry Greenfield said.

Luther, Greenfield said, was conscious of the “commercialization of salvation” in his community. He evaluated current events against the values laid out in Scripture.

Religions cannot act ideally without conversation, he said. What people believe must be at the foundation of things, but compromise must follow closely behind.

“I once thought Küng was right,” he said. “I changed my mind. I think religions can work together without dialogue about what they believe and the foundations for those beliefs. I don’t think it’s necessary for concerted action. I’m fairly sure that shared action will lead to dialogue about beliefs … I don’t think we need to wait for that in order to act together. I’m much more in favor of inclusivity upon diversity, especially when that inclusivity leads to shared action for the common good.”

People must prioritize, he said, being a global citizen first and an American second. This is not to be a supplement for national identity, but instead, a complement to it.

“My Americanism will be shaped by what I understand to be my global citizenship,” Greenfield said, “not the other way around.”