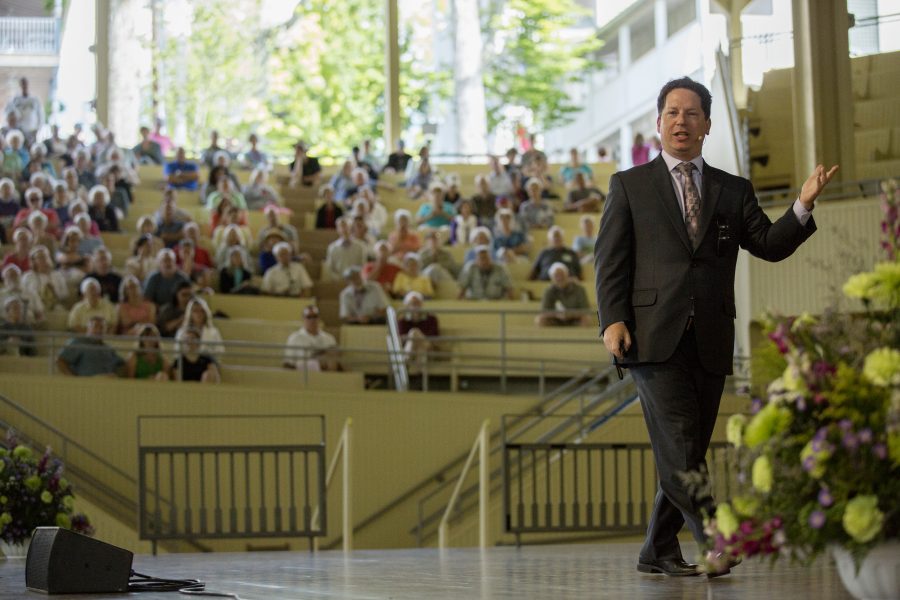 Scott Kennedy has been going to China for almost 30 years, and lived there off and on for six or seven of them; when he tells people about his travels, he says he spent 75 percent of the time in the United States and 20 percent in China.

The remaining five was spent on United Airlines flights.

Speaking Tuesday morning in the Amphitheater as part of Week Four: “Geopolitics Today: A Partnership with CSIS,” Kennedy delivered a lecture drawing on both his own time overseas and his expertise as the deputy director of the Freeman Chair in Chinese Studies and the director of the Project on Chinese Business and Political Economy at the Center for Strategic and International Studies.

Combining experiential and academic knowledge, he explored the intricacies of U.S.-Chinese relations and what the future holds for these two interconnected global powers.

“If you step back, the position of the U.S. and China — I kind of feel like it’s Alice in Wonderland, and we’ve gone down the rabbit hole,” Kennedy said.

Right now, China might look like a “publicly spirited, responsible stakeholder,” but from the perspective of the government in Washington, D.C., it’s more akin to a “conventional, self-absorbed rogue nation.” But though the relationship between it and the United States is dynamic, and they seem to be trading places on a global scale, Kennedy cautioned against overzealous predictions.

“We need to keep sight of the elements of China and the United States that haven’t changed … (and) ways that they’ve changed unexpectedly that don’t fit the narrative,” Kennedy said. “The U.S. still has tremendous strengths (and) China has, still, significant problems and challenges.”

Acknowledging this ambiguity will be vital for developing effective American policy toward China going forward.

To be sure, much of the excitement about China is rooted in real accomplishment. Kennedy pointed to the story of Robin Li, a Chinese entrepreneur who studied and worked in the United States before founding search engine giant Baidu.

China’s tech sector is flourishing, not only in terms of the internet but also a wide range of industries, including autonomous vehicles, robotics, semiconductors, pharmaceuticals, transportation and materials science.

Investment, too, is an exploding field.

“VC, when I was growing up, meant Viet Cong,” Kennedy said. “Now it means venture capital, and China has one of the most vibrant venture capital markets in the world.”

China is also a major player in the clean-fuel arena. It is “generating more renewable energy, faster, than any other country”; by 2020, there will be an estimated 13 million renewable energy jobs created, and by 2030, it will have the largest electric car market in the world.

We need to keep sight of the elements of China and the United States that haven’t changed … (and) ways that they’ve changed unexpectedly that don’t fit the narrative,” Scott Kennedy said. “The U.S. still has tremendous strengths (and) China has, still, significant problems and challenges.”

It is also a leader in social welfare.

“Ninety-five percent of Chinese have health insurance,” Kennedy said. “That’s a huge number for a population of 1.4 billion.”

Pointing to President Xi Jinping’s recent leadership at international summits like the World Economic Forum, the Belt and Road Forum and the G20 summit, Kennedy said China is also a major influence on the global stage.

“This is tremendous change for China that I’ve seen over the last 30 years,” Kennedy said. “Now, in the last few years, there have been some big changes as well (in) D.C.”

Unlike its counterpart in Beijing, the government in Washington doesn’t seem interested in promoting tech; they are “focused on one industry: the steel industry.” This misplaced emphasis on domestic manufacturing comes at the expense of “high value-added technologies and services” necessary to grow the economy long-term, as well as fields like clean energy and transportation infrastructure, Kennedy said.

Kennedy further identified global leadership as an area in which America currently lags behind China.

“Xi Jinping spoke in Davos on Jan. 17, so I wanted to see what was Donald Trump doing on Jan. 17,” Kennedy said. “It was a tweetstorm day … The biggest tweets that got the most attention were his criticism of congressman and civil rights leader John Lewis, who said he wouldn’t attend Trump’s inauguration.”

Noting Trump’s threats of trade wars, decorum at the NATO summit and withdrawal from the Paris climate agreement, Kennedy added that “this is a different world.”

“It’s an immense challenge,” he said, “and it really distinguishes how the two countries have flipped in many ways.”

At the same time, however, he warned against going “too far” in estimating the reversal of China’s and America’s roles. China is not purely a rising star, nor is the United States entirely a falling one; “we need some balance.”

America, for its part, remains the premiere global leader in research and development and high-tech sectors. It has a world-class university system (good enough to draw Chinese students away from China’s own program), a strong civil society, innovative political leadership and an economy that, though troubled by wealth distribution, has full employment and rising wages.

On the flip side of those pros are China’s cons.

“(It’s) as authoritarian, and as illiberal, as ever,” Kennedy said.

Since coming into power in 2012, Xi has centralized power in Beijing and in his own hands, becoming “the master of everything.” His administration has cracked down on the media, internet, lawyers and other contributors to civil society, including Liu Xiaobo, “the only Nobel Prize winner to pass away in custody since the 1930s.”

“But not all leaders like Xi Jinping, not all communists are alike … (and) as you may know, China’s in the midst of a transition,” Kennedy said. “His five-year term will end later this year … (and predicting his successor is) a hard thing to do because it’s a pretty opaque system.”

But Kennedy’s pretty confident in how it will turn out.

In addition to Chinese leadership looking similar to that of the past, the state-directed economy also seems primed to follow historical trends, at least insofar as its emphasis on five-year plans. Playing a Chinese-made video explaining the upcoming 13th five-year plan, Kennedy said that the country is investing in many high-tech sectors, although it is focusing more on the second half of R&D.

This push does not come without its problems.

It is also dealing with massive poverty, especially in rural regions; this issue carries with it additional complications of developmental delays among youth in those areas, a trend which will prove economically burdensome if extrapolated to the national scale.

Additional problems Kennedy said China must reckon with include debt from infrastructural development, questions of “internet sovereignty” and foreign policy issues like those caused by artificial islands being built in the South China Sea.

“China, I think, may be immensely successful (and) play a large global role, but today, it’s an illiberal China,” Kennedy said. “And China’s become much more illiberal under Xi Jinping … (and internationally) it’s still following a China-first strategy.”

As compared with the questions of faith and modernity that plague Middle Eastern foreign policy issues, America’s relationship with China must contend with secular questions about the power of the state in the world.

“China is much wealthier … (and) much more powerful than al-Qaeda, ISIS, or any other (threat),” Kennedy said. “So this is going to be an issue that we are going to be facing for a long time.”