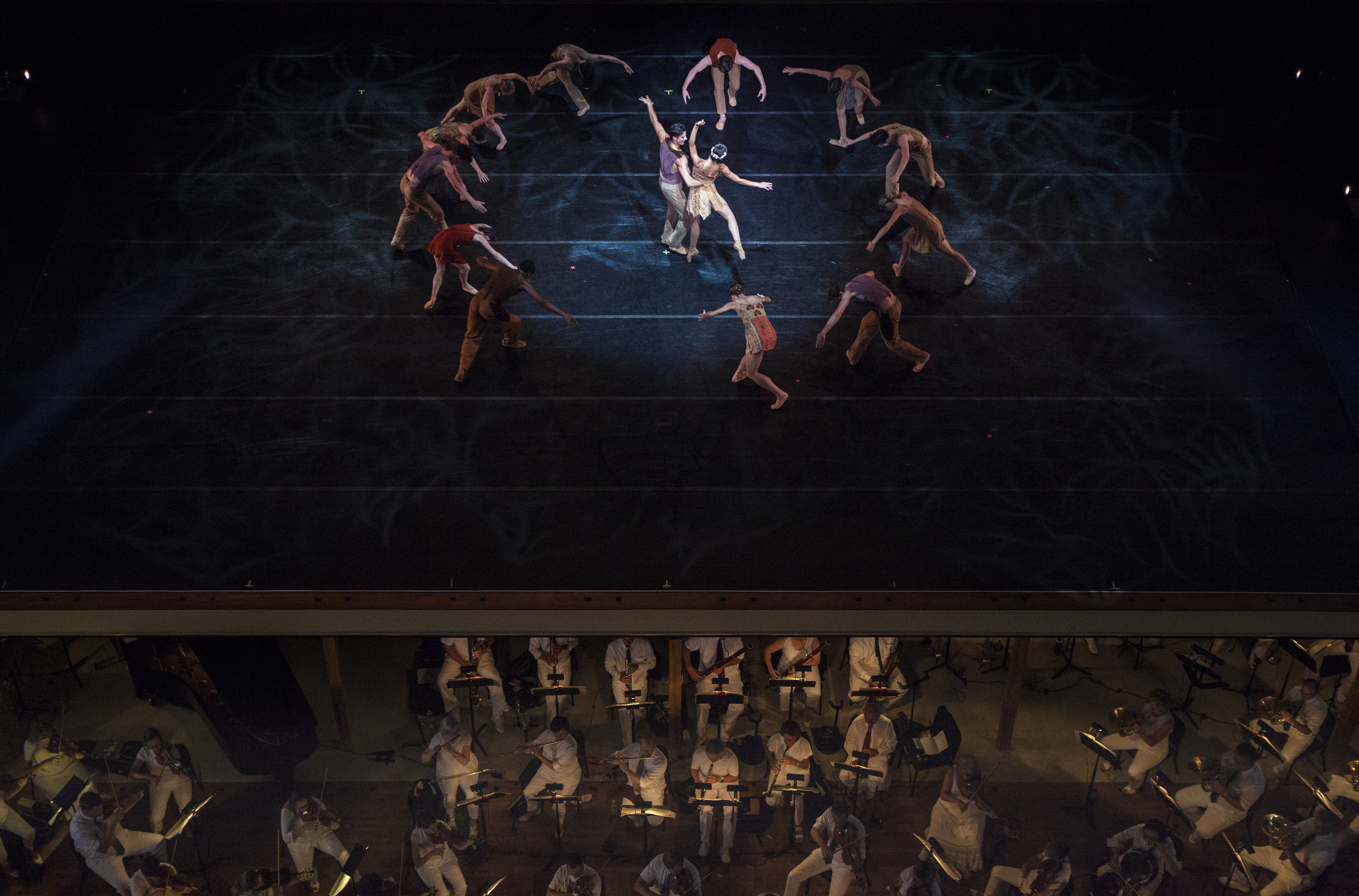 The Charlotte Ballet performs with the Chautauqua Symphony Orchestra in the Amphitheater on Tuesday, July 11, 2017. ERIN CLARK / STAFF PHOTOGRAPHER

Tuesday night at the new Amphitheater was a celebration in so many ways of Jean-Pierre Bonnefoux, himself a Chautauqua “institution.” The first part of the festivities came from the new Amphitheater, with long-awaited and better sight lines for dance due to an elevated rake in the seating, upgraded air-conditioned dressing rooms and an impressive orchestra pit for the versatile Chautauqua Symphony Orchestra.

Undoubtedly it will, if Chautauqua plays its programming cards right, elevate this New York community to a new national level, although a few things, such as the stage entrances, remain to be tweaked.

And speaking of the programming, this particular evening was one of the strongest in my 15 years or so of reviewing here, the kind filled with dance moments that made you hold your breath in a wondrous awe.

It touched so many aspects of Bonnefoux’s wide-ranging career, beginning with Mark Diamond’s “La Valse.” Although this work took a strangely seductive approach to the Ravel work that usually is regarded as the deconstruction of society after World War I or the waltz form itself, it showed the talents of a mostly student cast, something near and dear to Bonnefoux’s heart at Chautauqua.

Led by Charlotte Ballet dancers Drew Grant and especially Elizabeth Truell, who could not be contained by Diamond’s choreography and floated like an elusive butterfly on the stage, the piece strived for rapture, but could not match the emotional complexities found in the music.

There were two separate pas de deux as well, demonstrating both the classical knowledge and Balanchine expertise of Bonnefoux and his wife, Patricia McBride, in setting works.

Is there anyone better than McBride in channeling Balanchine? Probably not.

We’ve seen her handiwork in the past, most notably coaching Alessandra Ball James and Anna Gerberich, who, shall we say, rocked Balanchine’s military-themed duet, “Stars and Stripes Pas de Deux” with Pete Leo Walker.

Tuesday we also saw Sarah Hayes Harkins, as vivacious as the legendary Violette Verdy (who had a hefty Chautauqua connection) was back in the day, trilling her bourrées like a piccolo and spinning like a top. James Kopecky was the crisp and proper soldier, attentive to those supported pirouettes, but armed with his own soft, light jump that neatly accommodated difficult beats with flexed feet.

Bonnefoux showed the detail that the pair give to their dancers, in this instance Ball James, who, like McBride, has an infinite smile that reaches to the Amp’s rafters. Partnered with an attentive and princely Josh Hall in the wedding pas de deux from “Sleeping Beauty,” we saw her delicately crafted arms as a newly minted bride, scooping up gobs of cotton candy, and balancing en pointe as if there was no tomorrow. Hall added poetic touches, as well as elegant aerial turns.

But Bonnefoux’s most important quality was his wholehearted embrace of contemporary ballet, shown not only by the stable of homegrown choreographers that he nurtured (such a bonus for Chautauqua audiences over the years!), but his sharp eye for rising choreographic talent.

When he took over the North Carolina Dance Theatre, which later became the Charlotte Ballet, he immediately sought out choreographers who could bolster the company’s repertoire.

One of his first finds was Alonzo King, a San Franciscan who subsequently developed a noted international presence. He was represented by “MAP,” which debuted in 1998, on Tuesday’s program.

Filled with King’s extreme and decidedly off-center stylings, the dancers looked stunning as they oozed with a palpable emotional intensity.

There were three sections set to Arvo Pärt’s familiar music, called “Look Up,” “Promise” and “Persist,” all of which gave an open-ended way to interpret the movement. Truell, Sarah Lapointe and Juwan Alston set a magnetic tone with unisons that blew the idea of human bodies into infinity. It was followed by Peter Mazurowski in an athletic solo performed in silence, almost like a movement sherbet cleansing the palate.

Two duets then featured Ball James and Kopecky and Chelsea Dumas with Hall. They exhibited a pervasive strain, a sense of urgency and a beautiful strength, especially in moments where they might tilt in from a distance and support each other only by clasping an outstretched hand.

But it was Mark Godden’s “Angels in the Architecture,” from a choreographer that Bonnefoux regards as a budding master on the international dance scene, that brought the program to a luminous close.

Part of that came from the orchestra, conducted by Grant Cooper and which, from the opening moments, had a pure, crystalline approach to the Aaron Copland score to cap a night of fine playing. Part of it came from the dancers, so lean and clean.

But the rest came from Godden’s choreography, so simple and straightforward in its intent and so mesmerizing from beginning to end. It seemed odd that Godden was apparently not aware of Martha Graham’s original choreography, one of her masterworks, for there were numerous similarities where Godden captured the spirit of her iconic movement, not the least of which was a grand sense of overall structure.

Godden’s inspiration, however, came from Thomas Merton’s quote, “The particular grace of a Shaker chair is due to the fact that it was made by someone capable of believing that an angel might come and sit on it.”

That was conveyed with a rather stark yet complicated backdrop, an unpretentious rack that covered the width of the stage and servwed as a hanging post for four of the six chairs and six Shaker brooms that, through their ingenious design, could stand on their own. (The structure also added what amounted to be another intermission to erect it, although it was worth the wait.)

The dancers were clad in neutral tones, although the women’s voluminous silky skirts, which they sometimes used in kinetic patterns and lifted over their heads, could take on a life of their own.

There were other details — the angular, sometimes prayerful arms and the swift, tiny steps reminiscent of Graham and European master Jiří Kylián, another seed from the Graham tree and apparently a catalyst for Godden. But in the end, with added dollops of humor often peeking out from the brooms, Godden held his own.

The entire program was a snapshot of Bonnefoux’s passion for so many aspects of dance. Chautauqua is lucky that this wasn’t a binding goodbye, however. Not only was he a singular dancer, the only one I know who was a principal dancer at two major international companies (Paris Opera Ballet and New York City Ballet) and an artistic director who then went to North Carolina to make another mark in the dance firmament.

Bonnefoux is also a stellar teacher, easily visible by just watching company members, particularly the men, improve from season to season. After this year, his passions will be completely directed to the Chautauqua School of Dance, where he will remain. And the students will become even nearer and dearer to his heart.