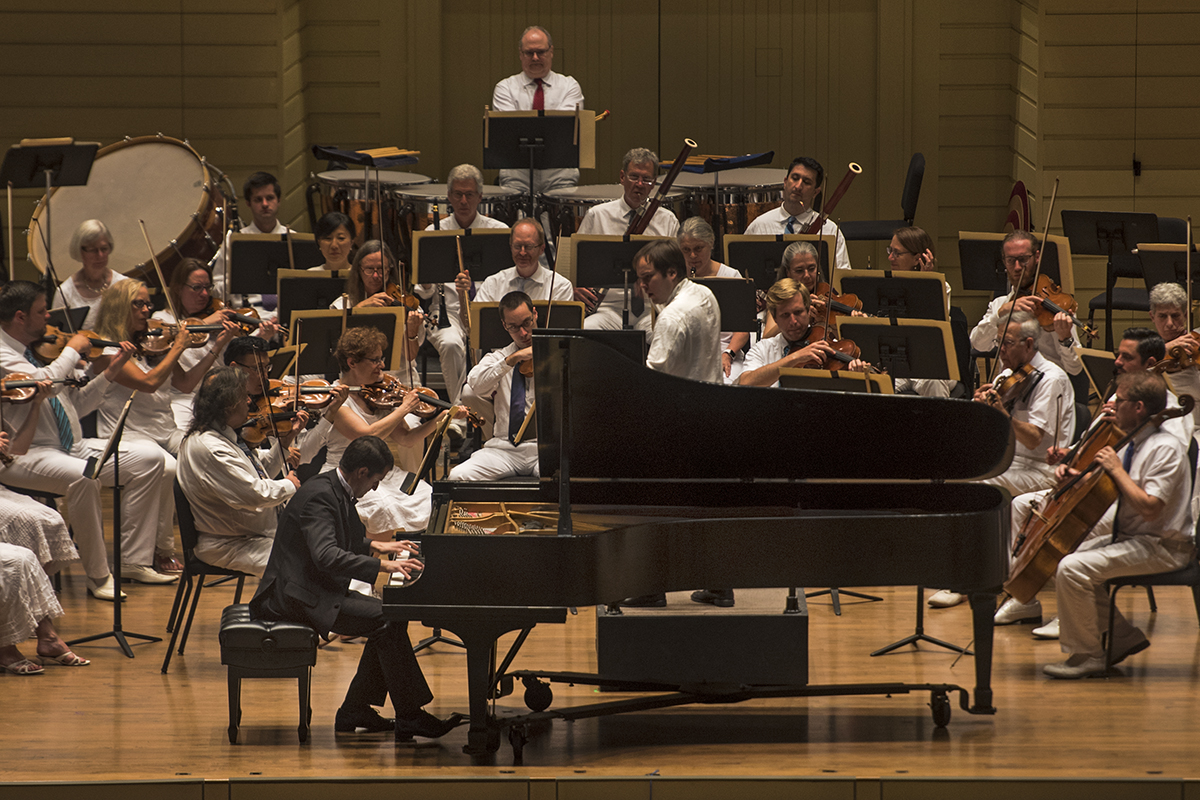 Thursday night’s Amphitheater concert by the Chautauqua Symphony Orchestra was the kind you hope to attend, a standard program allowing a visit to familiar works with fresh ears.

The program was led by frequent guest conductor Marcelo Lehninger, the Brazilian-born maestro just made music director of the Grand Rapids Symphony, who brought out the splendor of the CSO.

Instead of just an obligatory overture, the choice of Rossini’s L’Italiana in Algeri (The Italian Girl in Algiers) seemed one the musicians couldn’t wait to play. It began with graceful oboe, then flute passages and, of course, provided two of Rossini’s trademark long, building climaxes. (The amazingly facile 21-year-old Rossini typically knocked off his overtures a couple of days before the premiere, and claimed he wrote this whole opera in 18 days).

The soloist, making his Chautauqua debut, was Russian pianist Nikita Mndoyants (pronounced Mn-DOY-ants), who studied with his father Alexander at the Moscow Conservatory. In 2013 he participated in the Van Cliburn Piano Competition in Texas, 36 years after his father took home a prize; he’s also a composer, with two recordings to his credit so far.

Mndoyants chose the Liszt Piano Concerto No. 1, a work written by one of the greatest keyboard virtuosos in musical history. Liszt took nearly 20 years to complete the work, premiering it at Weimar in 1855 with Hector Berlioz conducting.

What makes the concerto unique is that it was written in a nearly symphonic format, with a four-section fast-slow-scherzo-finale structure. The seven-note main theme appears throughout, and Liszt is said to have sung it to friends with the words “Das versteht Ihr alle nicht” (“This none of you understands”). His famous use of the triangle in the third section, which was highly unusual at the time, led the grumpy critic Eduard Hanslick to call it a “triangle concerto,” despite the eventual percussion solo near the end.

Mndoyants handled Liszt’s thorny passagework with real skill and clarity. Some artists consider it a vehicle for pounding and, though the writing is necessary, virile and powerful, he showed in the somewhat subdued second section that he can also play with grace and subtlety. He and Lehninger seemed to cohere ideally in the hurtling climax, which brought the audience to its feet in applauding this highly gifted young artist.

Throughout, Lehninger’s motions were very easy to follow, his motions animated and clear; having conducted the CSO many times has provided advantages. For his big piece, he selected Tchaikovsky’s familiar Sixth Symphony, which asks for the ultimate palette of both orchestral virtuosity and deep expressiveness.

Beginning with its ominous bassoon opening and excellent woodwind playing, Lehninger built great drama in the opening passages. A section just before the end of the movement seemed a bit slow to my ear memory, but his overall interpretation was always convincing. In sum, he captured the Russian soul in this great movement’s wistful passion.

The 5/4 second movement is full of rhythmic buoyancy, and the orchestra captured the intense moodiness of its yearning middle section. The hurtling, rambunctious march, titled Allegro molto vivace, showing off the virtuosity of both the winds and the brass, was as fine a performance as you’ll hear anywhere, stirring and rousing the audience to early applause. It was most enjoyable to watch the smiling timpanist Stuart Chafetz, who gets to play one of the earliest of opportunities for the timpani to double the melody.

The finale, of course, plumbs the depths of Russian melancholy. The legend continues that it denotes a premonition of Tchaikovsky’s impending death, since it concludes with quiet throbs instead of a usual slam-bang finale, though Brahms had already ended his Third Symphony with a fading ending. The translation of its original Russian title was “passionate” when Tchaikovsky conducted the premiere in 1893, and only in its first performance after his death three weeks later was it dubbed “Pathétique.” Tchaikovsky felt it was the best work he had ever written, and he was supposedly in fine spirits at the time, but his mysterious death soon after the premiere has continued this myth.

The emotional nature of Lehninger’s interpretation certainly gave the feeling of foreboding, and a descent into the full spectrum of the human spirit. He found the heart of the piece, and his musicians responded in kind.

A critic’s job is not to find fault, but to tell the truth. This concert showed once again that these musicians, gathered from many great ensembles, play at the highest of levels. The strings are accurate and sumptuous, the winds fluid and lustrous, and the brass powerful and emphatic; no orchestra can ask for more than that.

Before the concert, principal bassoonist Jeffrey Robinson was invited by Vice President and Director of Programming Deborah Sunya Moore to thank the evening’s sponsors. He first gave a touchingly sincere appreciation to all of the orchestra’s supporters, and asked the whole orchestra to give the audience a big smooch, “MMMWWWAAAHHH,” with lustily waved arms. Let’s hope the feeling goes both ways, and that Chautauqua audiences realize how fortunate they are to have such a treasure in their midst.