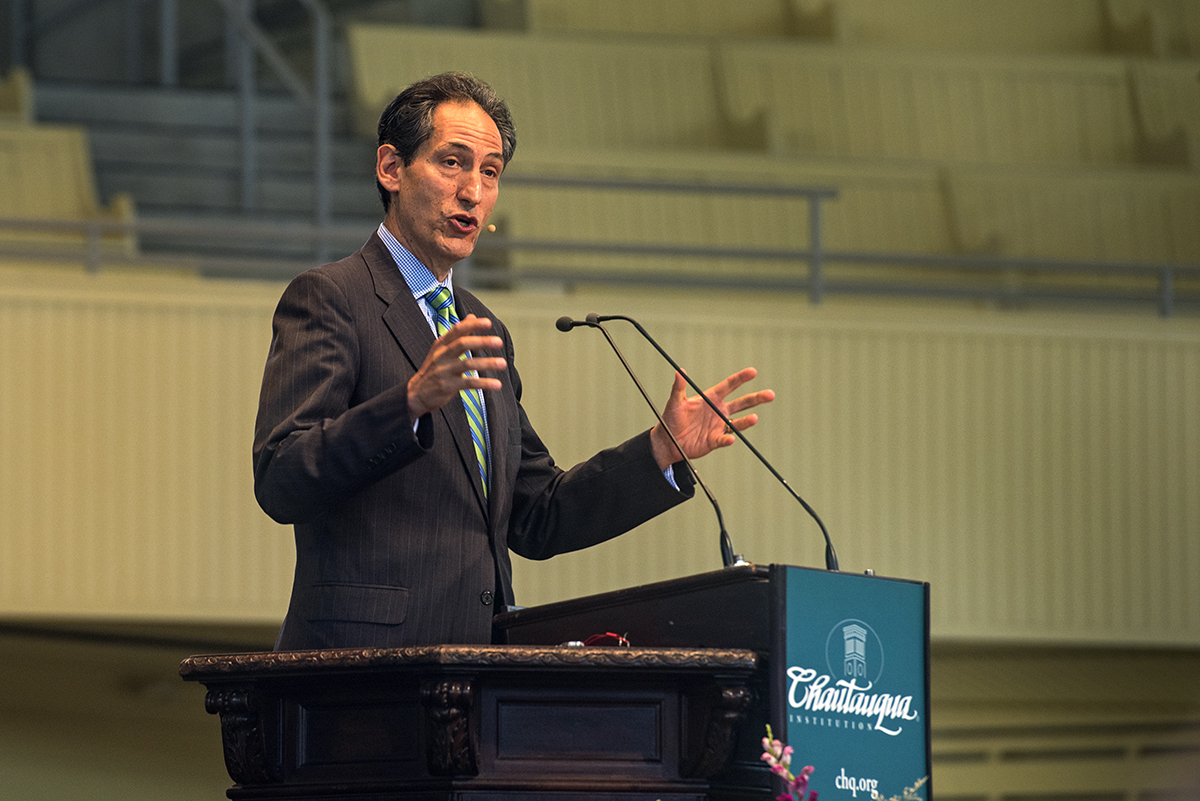 Jon Alterman delivers the lecture "The Middle East Amidst a Storm" on Wednesday, July 19 in the Amp. OLIVIA SUN/STAFF PHOTOGRAPHER

The main thing Jon Alterman wanted to talk about was the “ferocity of the Middle East.” And from civil wars in Syria, Yemen and Libya, to insurgencies in Iraq and Egypt, to “rising tensions” just about everywhere else, he had plenty of material to draw on.

But speaking Wednesday morning in the Amphitheater as part of Week Four: “Geopolitics Today: A Partnership with CSIS,” Alterman — the senior vice president, Zbigniew Brzezinski Chair in Global Security and Geostrategy and the director of the Middle East Program at the Center for Strategic and International Studies — did not start off with his sphere of geopolitical expertise.

Instead, he talked about a tree.

“When I bought my (D.C.) house in 1999, there was a large pin oak in the front yard; and by large, I mean this thing was huge,” Alterman said. “It was shaped like a pin, with a long, tall trunk that suddenly opened into this huge leaf canopy that covered my front yard.”

He tried to grow a garden below it, but the foliage blocked out the sun and not much took root.

Then, five years ago, on a midsummer’s night, “it all changed.” Two weather fronts collided, forming a derecho storm that swept over Washington, D.C., and ultimately, with a “massive crack” of lightning, struck down Alterman’s tree. His family awoke to find their front yard covered by the felled oak.

“Destructive storms like this derecho often arise when several weather systems collide … (and) it seems to me that’s what’s happening in the Middle East now,” Alterman said.

Of course, Arab geopolitics aren’t influenced by hot and cold fronts; rather, Alterman identified the trio of metaphorical storms that plague the region as internal challenges, external challenges and “a profound crisis of confidence.”

“In an earlier age, each one of these destructions alone would’ve been enough to provoke widespread crisis,” Alterman said. “Now they’re happening all at once, amplifying, reinforcing and building upon each other.”

And whereas the Arab Spring demonstrated the degree to which this region is interconnected, Alterman predicts that the next decade will highlight the differences between its nations.

The first factor inciting that tension is internal in nature.

Demographically, over two-thirds of Arabs are under 30, and youth unemployment is at 30 percent; not only are there not enough jobs to go around, but for Arab males, time spent attending school lowers one’s odds of finding a job at all.

Furthermore, despite massive improvements in government capacity since the ’50s, state bureaucracies remain unprepared to deal with the “complexity and speed of modern life.”

“What they have isn’t enough because they’re trying to compete on a global stage,” Alterman said.

Economically, the region’s strong ties to oil (even for non-oil-producing countries) makes it vulnerable to price drops, especially when a low price-per-barrel overlaps with additional fiscal issues like “bloated public sectors” and “a weak banking system.”

On top of all that, changes in media have created a “very uncomfortable environment” for regimes used to controlling the flow of information.

“The games that governments play with news media have changed,” Alterman said. “When I was in Damascus in 1991 … I (picked) up the newspaper and (looked) at the front page, and there (were) articles that had been cut out with a razor blade. … The fact is, you can’t play that game anymore.”

“Every Arab state I’m aware of feels a certain amount of threat from Iran,” Alterman said, citing Iranian involvement in violence, or support of violent groups, in Syria, Yemen, Lebanon, Palestine, Kuwait and Bahrain. “Iran has influence and Iran loves to remind people … that ‘I can touch you and you will feel it.’ ”

Additionally, non-state actors like the Islamic State group, al-Qaeda and an “array of like-minded terrorist groups” work to weaken central governments and foment discord among populations.

“(These groups) exploit local social, economic and political grievances, and addressing those grievances — that is, the internal (ones) — is really, really hard,” Alterman said.

Then, also adding fuel to the fire, is what Alterman dubbed the “uncertainty challenge.”

“Simply put, the region is wracked with uncertainty about how people and states will behave … and how the rest of the world is going to treat the Middle East,” Alterman said.

Governments and rulers used to believe they understood their populations, but the Arab Spring upended those assumptions. Suddenly unsure about how much control they had over their own countries, and with criminals and civilians alike no longer cowed in fear of the state, national leadership struggled to “re-establish control.”

The games that governments play with news media have changed,” Jon Alterman said. “When I was in Damascus in 1991 … I (picked) up the newspaper and (looked) at the front page, and there (were) articles that had been cut out with a razor blade. … The fact is, you can’t play that game anymore.”

At the same time, the massive expenditure of the Iraq War, alongside America’s historic rise as a global oil producer, gave the United States both the motive and the opportunity to “push the Middle East aside.” But after 70 years of U.S. efforts to make the region dependent on it, a withdrawal would leave allies without the security they’ve relied on for decades.

“As a Saudi friend explained to me about four years ago … ‘Not only do we not have (an alternative) … we don’t have the people or institutions to craft an alternative,’ ” Alterman said. “ ‘There’s no way we can conceptualize an alternative if the U.S. were to pull out.’ ”

With no clear successor to the mantle America holds in the region — and the U.K. before it, and the Ottomans before that — and “no question in anybody’s mind that the oil age is going to come to an end,” one is left asking: What’s next?

Though the “skies seemed calm and predictable” only yesterday, the overlapping nature of these three crises is now brewing a perfect storm.

What seemed like a fairly consistent political scene across the Arab world in the 1990s and 2000s has now, post-Arab Spring, fractured into an array of different, and differently troubled, geopolitical actors. With every country distinct from every other in terms of size, demographics, policy, political stability, wealth and so on, the region finds itself adrift amid a sea of diversity.

“And, there’s a question of governmental capacity,” Alterman said. “Governments are weak partly because they haven’t existed to do stuff, they’ve existed to give people jobs. … How do you transition from that, to having to deal with the complexity of the modern world?”

Libya provides a case study in this disruption. In 2008, Moammar Gadhafi worked to tear down every non-state institution that might challenge his supremacy; now that he’s gone, it is much harder to create stability.

“When I look at the disarray in Libya, it’s not a total shock, because Libyans were trained for 40 years to snipe each other because that’s what their government wanted them to do,” Alterman said. “Getting beyond that will take the entire process.”

All the same, Alterman urged against a perspective too steeped in “gloom and doom”; there are still “small pockets of capacity and excellence.”

Government ministries are pushing for smaller staffs and budgets; workers are traveling abroad to get experience and then bringing their new skills back home; the masses of young people, in all their “impatience, restlessness and creativity,” are spreading ideas and driving positive change.

As a Saudi friend explained to me about four years ago … ‘Not only do we not have (an alternative) … we don’t have the people or institutions to craft an alternative,’ ” Jon Alterman said. “ ‘There’s no way we can conceptualize an alternative if the U.S. were to pull out.’ ”

Granted, these problems are not going away anytime soon. With civil wars lasting a decade on average, and insurgencies even longer, it will be a while before the Middle East sees an end to its conflict. But unlike the Cold War, when nations could choose one of two foreign policy options, the modern Arab world is presented with an “incredible kaleidoscope of possibilities, constantly changing and refracting under shifting conditions.”

As he closed his lecture, Alterman returned to the story of his fallen oak tree.

“The tree company (removed) the debris from our yard … (and) they ground down the stump, leaving us a pile of woodchips and sawdust,” Alterman said. “Today the garden has the same shape it always did … (but) where the mighty oak once stood is a little ornamental red Japanese maple.”

And with the canopy no longer blocking out the sun, other plants — flowers and weeds alike — are thriving.

“The garden isn’t what it was, and perhaps not what it will be,” Alterman said. “But after the storm, it couldn’t remain as it had been. It’s a new garden that thrives under new conditions.”