When she visits with the Chautauqua Literary and Scientific Circle Thursday, Sandra Cisneros will be bringing her child with her.

That child isn’t a son or a daughter. It’s her first novel: The House on Mango Street.

“I like to tell everyone I have eight children, and it’s the one that goes out to work and brings home money for the rest of us,” Cisneros said. “As it should; it’s the oldest child. I love them all, but this is the one that works the hardest.”

Cisneros will discuss The House on Mango Street, Week Four’s Chautauqua Literary and Scientific Circle selection, at 3:30 p.m. Thursday in the Hall of Philosophy for Week Four’s CLSC Roundtable.

First published in 1984, The House on Mango Street has become a staple of contemporary American literature and is often taught in high schools across the United States. Cisneros said what makes her proudest of the book’s long shelf life is that it’s still finding readers from all over the world — readers who reach out to her.

The House on Mango Street is 34 years old, but it has a certain freshness when it comes to the national conversation about immigrants and minority communities. The novel follows Esperanza Cordero, a Latina teenager living in Chicago, across a series of vignettes.

Cisneros said it’s sad, in a way, that the book feels more relevant than it did when it was first released, but she hopes it can still “serve as medicine and illuminate for readers something in themselves.”

Cisneros said she believes that all books are medicine, but not everyone shares the same prescription.

“I might say, ‘This book has really changed my life,’ ” Cisneros said. “And you’ll read it and say, ‘What? I don’t get it.’ Because that’s not your prescription, you see. I’m very lucky that The House on Mango Street has been the prescription for many people in its time and its age. I don’t know if it’ll be the prescription in 20 years, in 400 years — I can’t say. But for right now, it’s the right prescription, and I hope it’s working its medicine.”

Cisneros said she started to realize her purpose with her writing when she was a graduate student in the Iowa Writers’ Workshop. While her cohorts discussed matters of craft and form, Cisneros began to think about how her work could help others. She was working on her master’s of fine arts in poetry, but started working on what would become The House on Mango Street on her own time.

“At Iowa, I don’t think I said two words,” Cisneros said. “But I was thinking and watching, and taking it all in. The House on Mango Street was not my thesis. I wrote it on the side. I tell people it was my lifejacket — it’s how I survived Iowa.”

After finishing her program in Iowa on a Friday, Cisneros started a job the next Monday at Latino Youth High School in Chicago, where she found the inspiration for some of the characters in The House on Mango Street. As she began teaching, Cisneros said the two places were “a universe away.”

I’m very lucky that The House on Mango Street has been the prescription for many people in its time and its age. I don’t know if it’ll be the prescription in 20 years, in 400 years — I can’t say. But for right now, it’s the right prescription, and I hope it’s working its medicine.”

“Being in that school made me ask questions that graduate school hadn’t asked us,” Cisneros said. “What was good literature, and how could it help someone who comes to school with a bloody lip? How can literature aid or salve or save that person? How can it help our young people deal with the violence and beatings that life gives us? How can a poem save their lives? We didn’t ask those questions.”

Her position as a teacher caused Cisneros to ask those questions of herself, and she said it helped her find a “political direction and a feminist direction” that began to guide her work. It also gave her “a completely different agenda” than what she’d been taught in graduate school: an agenda focused on serving others.

“To me, my purpose was, ‘How can I make the world better?’ ” Cisneros said.

The book also became a way for Cisneros to find her voice, she said — a voice that was often stifled. She said when she thinks back to who she was when writing The House on Mango Street, she thinks of the cover of her 2015 memoir A House of My Own, which features a photograph of a young Cisneros.

“That’s where I was, that was me when I was starting The House on Mango Street,” Cisneros said.

She said when she looks at that photograph and sees herself in all her innocence, “staring into the headlights like a deer,” she sees a woman who’s “very different and yet very much underneath the character of Esperanza.”

Writing the character of Esperanza allowed Cisneros to find what she wanted to say with her work. Cisneros said for women — and particularly minority women — the search for a public voice can be a difficult one.

“You’re raised to be quiet and let others speak,” Cisneros said. “You’re raised to be humble, but that’s a good thing. But you have to imagine also that you’re a working-class person, where you’ve incorporated the worst parts of racism. And that’s believing that what you have to say is worthless. So you have to fight against all of those things when you don’t see yourself in books, when you don’t see yourself in films portrayed accurately. You really have to fight to gain a voice at all, let alone a public voice. So The House on Mango Street was my way to speak.” 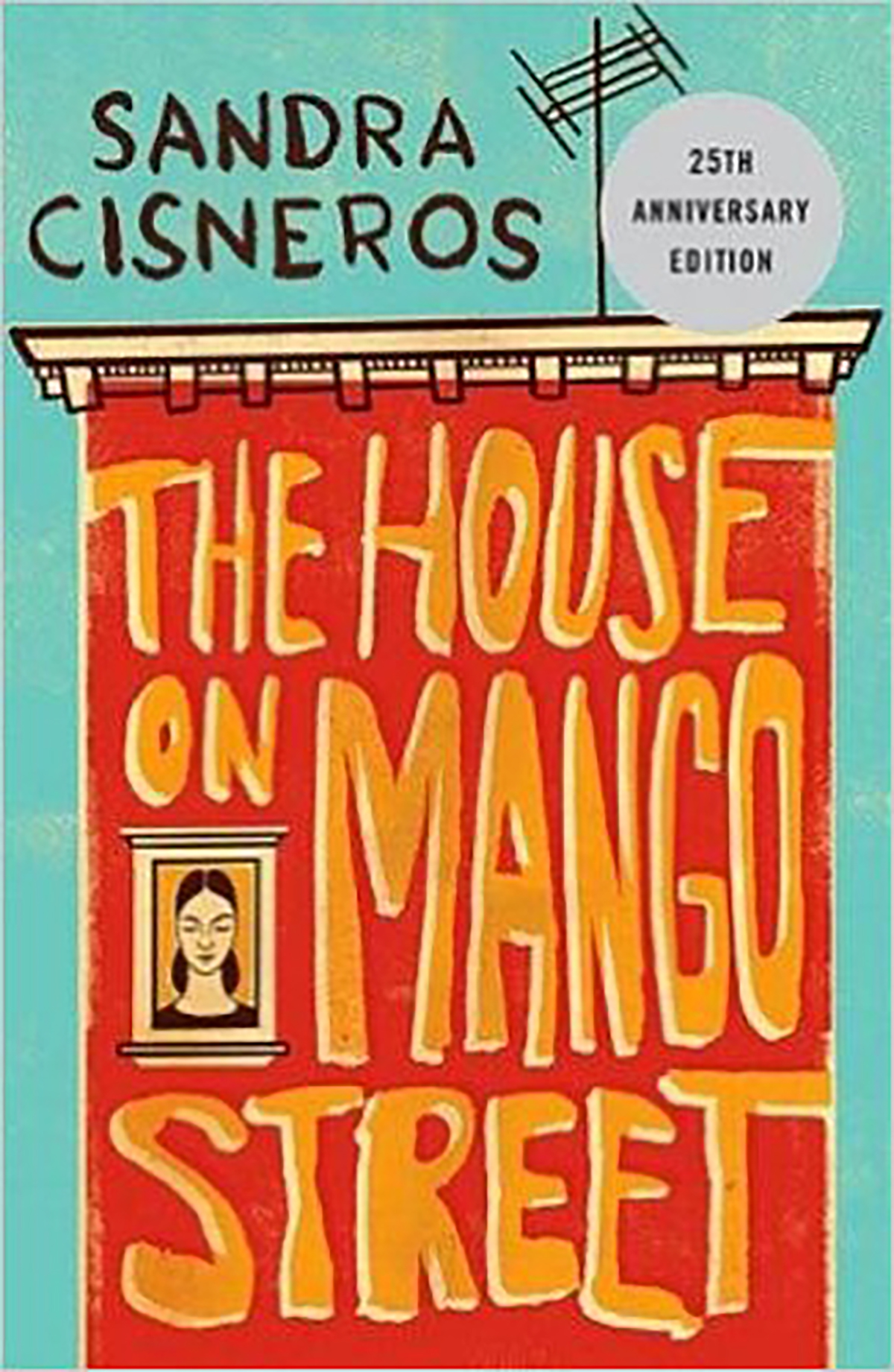 The book spoke to Sherra Babcock, vice president and Emily and Richard Smucker Chair for Education, at a time when she didn’t realize how much she needed it.

Babcock said she read The House on Mango Street when it was first published, and it was a text that helped her understand the people she saw day to day in her job as a dean of students at Southwestern University.

“It presented an experience that I hadn’t had, but that some of our students had,” Babcock said. “It was an incredibly important book for me. I thought that the characters were wonderfully drawn; I had a better understanding of their lives and I was hungry to read more.”

Babcock said she kept reading Cisneros’ work over the years, and when she first started working at Chautauqua Institution in 2007, she began to look for a way to bring Cisneros to the grounds. She continued to look for opportunities, she said, but could never quite find the right fit, so she kept the idea in the back of her mind.

The perfect opportunity arose this year when Babcock was reading A House of My Own and received a text message from Deborah Sunya Moore, vice president and director of programming.

“Deborah Sunya Moore asked me if I’d ever heard of (Cisneros) because (composer) Derek Bermel was thinking about creating a piece based on her work,” Babcock said. “And I said, ‘Not only have I heard of her, I’ve wanted to have her here for 10 years, and I’m reading her right now.’ ”

Babcock started making plans from there, she said, and was thrilled to have Cisneros accept the invitation to present The House on Mango Street with the CLSC, which she said feels like a dream 10 years in the making.

That dream now touches on other facets of Chautauqua’s programming: The House on Mango Street is also one of Week Four’s CLSC Young Readers selections, and there is currently an exhibition inspired by Cisneros’ work in the Strohl Art Center, called “Homage to Mango Street.”

Finally, Bermel’s “Mango Suite,” commissioned for the Chautauqua Symphony Orchestra by Francis and Cindy Letro, in honor of Tom and Jane Becker for their dedication to inter-arts programming, will be performed by the CSO on Saturday.

Babcock said she thinks the book’s power comes from the way Cisneros invites people into a world that feels real for the reader.

“It feels true, whether it’s exactly true to life or not,” Babcock said. “Having been a dean in Texas, I’ve heard so many students say, ‘This captures my life.’ That’s why it’s a classic: people have identified with it, and it’s truth for a lot of people.”

Cisneros said she’s eager to revisit that truth as she looks back on her first novel. She said she started the book when she was 22, finished it when she was 28, and now she’ll be speaking about it at the age of 62.

“I want to say things at Chautauqua that I haven’t said before, about who I am now and where I was then,” Cisneros said. “I just feel like, for myself, I want to have a fresh conversation that isn’t the same old things I’ve said before that you can find in print. I want to say something fresh about where I am now, and what I see in the young woman that was myself.”

Cisneros said she also hopes her book will help readers understand the importance of difference, and how to turn that difference into a means of connection.

That’s the magic of the book, she said: It allows people to feel at home in it.

“And that’s the magic of art,” Cisneros said. “If we really work at it and venture into the places that we’re afraid to go to with our art, it can take us and transform us — and transform the reader.”