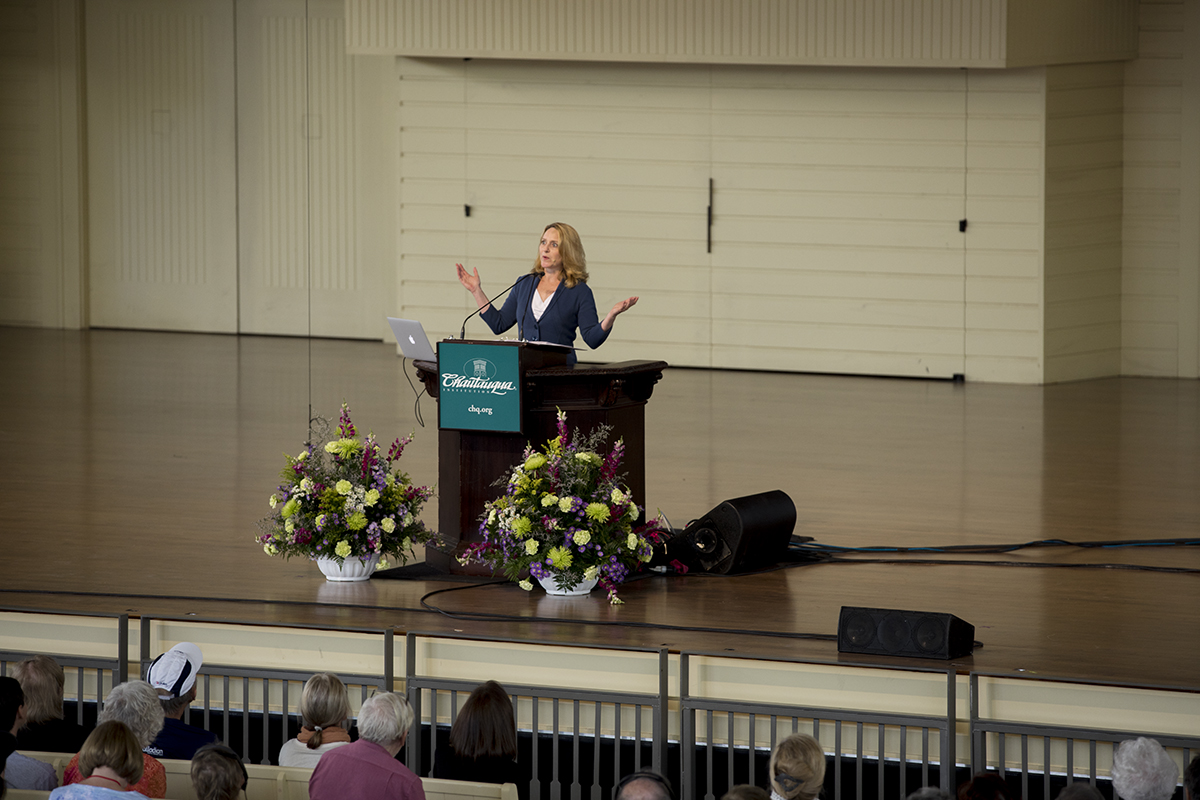 Senior vice president, Henry A. Kissinger Chair and director of the International Security Program at the Center for Strategy and International Studies Kathleen Hicks delivers her speech on geopolitics on Monday, July 17, 2017 at the Amphitheater. PAULA OSPINA / STAFF PHOTOGRAPHER

As the senior vice president, Henry A. Kissinger Chair, and director of the International Security Program at the Center for Strategic and International Studies, Kathleen Hicks has made a career of helping policymakers “make informed decisions based on facts.”

And as part of a bipartisan think tank, she aims to give impartial advice.

“We like to think we start with the questions and not the answers,” Hicks said.

Speaking Monday morning in the Amphitheater as the first lecturer of Week Four’s theme “Geopolitics Today,” Hicks covered a number of the questions that hang over American foreign policy today. Only once that groundwork had been laid did she venture so far as to make suggestions about how such crises might ultimately be resolved.

“What is the connection between our domestic politics, world affairs and the future conduct of … U.S. foreign policy?” Hicks asked.

The answer, she suggested, was in part rooted in political polarization.

Since 1994, the percentage of Americans who hold unfavorable or very unfavorable views toward members of the opposite political party has risen by more than 20 percent. This can be attributed to a host of factors, including the “two-party system, money in politics, disparities in income, education, culture and geography,” as well as the siloing of partisan information access.

“Foreign policy traditionally in the United States has (had) very broad bipartisan consensus,” Hicks said. “It’s thus probably one of the last areas in which we are seeing polarization, but we are feeling (it).”

In particular, while there has indeed been a longtime consensus on the “big question” of America’s role abroad, the 2016 elections and the preceding years upended that conventional wisdom.

“For the first time ever in 2009, and again in 2013, most Americans responded that the United States should ‘mind its own business internationally and let other countries get along the best they can on their own,’ ” said narrator Colin McElhinny in a CSIS video Hicks played.

But what are the issues at stake here? What exactly is it that isolationists want a withdrawal from?

One of the biggest international crises right now is the Syrian civil war, Hicks said. What started as part of the Arab Spring has blossomed into a conflict drawing in major international powers like Russia, Iran, the United States, the Gulf states and various European nations.

“All of these actors (are) now operating in a military sense inside Syria, so you have a very crowded battle space that is fraught with risk,” Hicks said.

United Nations experts estimate it will take at least a decade after the end of the conflict for all 11 million displaced civilians to return home.

Foreign policy traditionally in the United States has (had) very broad bipartisan consensus,” Kathleen Hicks said. “It’s thus probably one of the last areas in which we are seeing polarization, but we are feeling (it).”

Yet some foreign policy concerns are not even confined to a single nation.

“Probably at the top of most Americans’ … list of foreign policy concerns begins in Syria in a sense, but (is) global in nature, and that is concern about terrorism,” Hicks said.

Progress in the fight against the Islamic State group has seen successes in recent weeks, as with the retaking of Mosul, but even if other major ISIS strongholds fall — Raqqa in particular — there will still remain cells elsewhere, and homegrown domestic terrorism is an issue unto itself.

“We will likely see continuing terrorist threats at home and around the world, whether it’s under the label of al-Qaeda, the Islamic State, or some new manifestation,” Hicks said. “I think we should anticipate that this is an aspect of our international environment that will continue into the future.”

State actors pose their own threats to the United States. China continues to invest in its military and expand into the South and East China Sea, acting in political “gray zones,” where its actions are below the threshold likely to prompt an American response. Meanwhile, Russia (though a declining power) proved with its invasion of Ukraine and annexation of Crimea that it intends to “go out with a bang” or at least “extract as much as possible” while it still can.

“When the United States thinks ahead over the next 20 years about the type of military capability it needs … it’s thinking about China,” Hicks said. Yet at the same time, “when the U.S. looks bad, the Russian government looks good.”

Meanwhile, North Korea, with its strategy of “calculated unpredictability,” internal repression and nuclear development, presents its own unique question on the world stage.

“If you hear anything about North Korea from experts … what you’re going to hear is, ‘That’s a really hard problem to solve,’ ” Hicks said.

Iran is “more complicated” due to its internal political struggles and tensions with the Sunni Arab states that fall along both religious and regional schisms. Though it hasn’t made major investments in conventional military technology, its unconventional modes of warfare (like cyber warfare and support for terrorist groups) pose their own threat.

“All of this is taking place against a backdrop of increasing connectivity around the world,” Hicks said.

We will likely see continuing terrorist threats at home and around the world, whether it’s under the label of al-Qaeda, the Islamic State, or some new manifestation,” Kathleen Hicks said. “I think we should anticipate that this is an aspect of our international environment that will continue into the future.”

There are currently 2.6 billion smartphone subscriptions globally, and will be an estimated 6.1 billion by 2020. As internet technology becomes more universal, countries like Russia, China, Iran, North Korea and the United Arab Emirates are all using cyber warfare and hacking to achieve their ends.

It isn’t one-sided, either.

“I hope that no one thinks of us as weaponizing (it), but the United States is pretty darn good at cyber, too,” Hicks said. “We have the capability … to use cyber as necessary to avoid the need to use kinetic weapons.”

This changing technological context is complicated by shifts in the environment. Urbanization, climate change and resource scarcity pose human problems in their own right, and also overlap with one another in ways that exacerbate the threat of each.

“(But) this is not all bad,” Hicks said. “The international system is succeeding in very, very important ways that I want to highlight.”

There are also “many fewer people (being) killed by violent conflict,” although that trend does not account for the ongoing Syrian crisis.

It is in this global context that the recent American trends toward isolationism have happened.

“The United States is still a tremendously strong country (and economy) … (but) this prosperity is really not being shared across the United States, and this is part of the issue with how we think about … foreign policy,” Hicks said.

Globalized trade plays a role in this — it’s hard to find a product that is exclusively manufactured either domestically or abroad. Automation, too, has had an impact. After all, it costs $25 per hour to pay a human to weld, and $8 for a robot to do it.

Sentiments about whether immigration helps or hurts the domestic economy are also incredibly divided, split nearly equally between each side.

It is under such circumstances that, on a global scale, populism has taken hold. As seen with Brexit, President Donald Trump’s election and Marine Le Pen’s (failed) French candidacy, these socioeconomic dynamics are increasingly manifesting as a rejection of the “global elite establishment.”

“This is happening on the right and the left,” Hicks said. “They’re different, but it’s a very similar sentiment: that the center … is crumbling.”

Amid all this crisis, Hicks proposed three main factors the United States can “hold on to” while navigating its environment.

The United States is still a tremendously strong country (and economy) … (but) this prosperity is really not being shared across the United States, and this is part of the issue with how we think about … foreign policy,” Kathleen Hicks said.

The first is the paradox of the United States being a superpower even while losing influence overseas. Though it will likely remain the world’s superpower for at least 15 years, America and its traditional strengths — diplomacy, trade, mass military force — are not well-suited for dealing with a rise in non-state threats, Hicks said. Further, many crises won’t be possible for the United States to solve on its own.

The second is the “threat of constancy in American public support of international engagement.” Despite the rise of Trump, the majority of Americans do not support isolationism; further, the president’s national security team seems more willing to work with other nations than Trump’s rhetoric would suggest.

The third is the near-inevitability of America pursuing a “selective engagement approach” to foreign policy. With the use of force already controversial, resources limited and voters focused on domestic issues, the United States will have to selectively choose which global crises it engages in going forward.

If all this is true, then “what kind of foreign and security policy imperatives … are the must-dos?” Hicks asked.

“Advancing (those) three foreign policy imperatives … will take an active, focused effort,” Hicks said. “It might be hard to hope for success, as it is dependent on attributes not normally associated with the current Washington political climate. … (These are) monumental tasks; but they’re not unprecedented.”