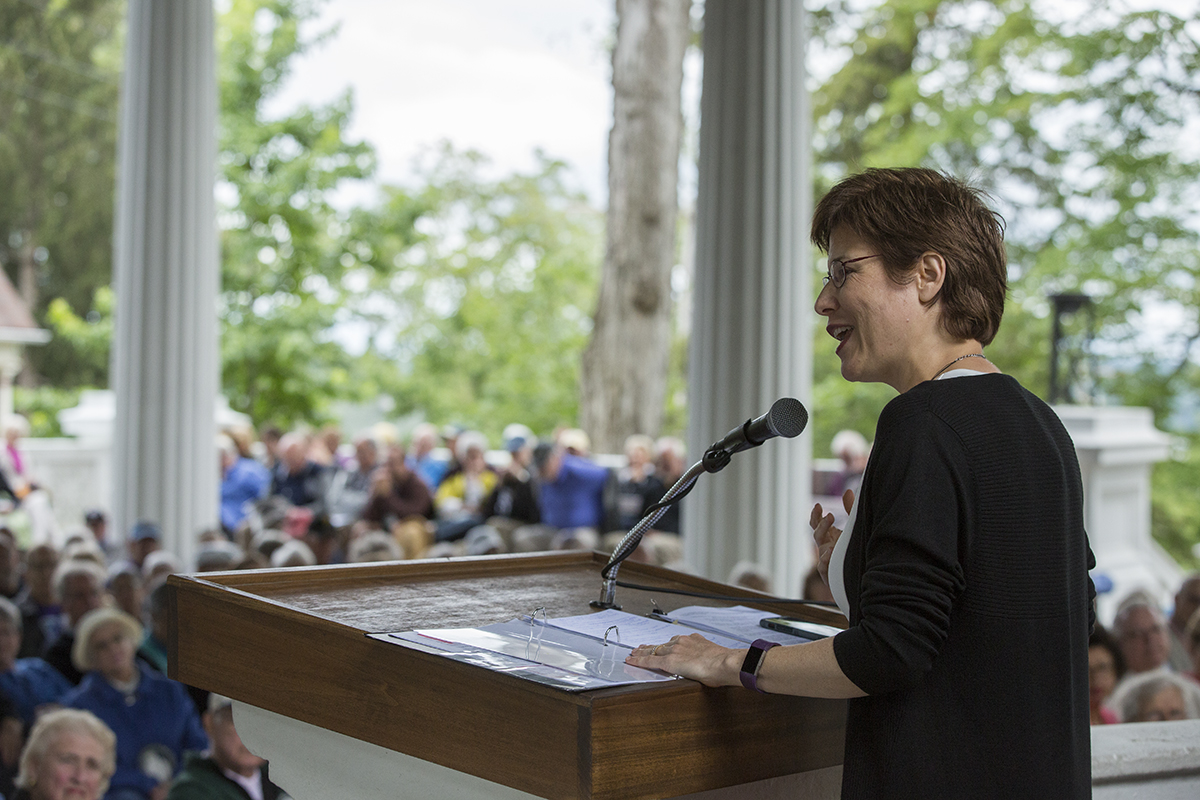 Melissa Rogers, a nonresident senior fellow in governance studies at the Brookings Institution, discusses religion’s role in government during her lecture Tuesday, July 25, 2017 in the Hall of Philosophy. CAM BUKER/STAFF PHOTOGRAPHER

In the case of Elk Grove Unified School District v. Newdow, the U.S. Supreme Court heard arguments on whether the phrase “under God” in the Pledge of Allegiance was constitutional. So divisive was the public turmoil surrounding the case that comedian Robin Williams proposed Americans skip the controversy altogether and replace the phrase with “one nation under Canada.”

That “delicate and sensitive area,” the relationship between church and state, is where Melissa Rogers spent her lecture “The ‘Conscience of the State’: Religion’s Role as an Independent Check on Government” Tuesday in the Hall of Philosophy. Rogers a nonresident senior fellow in governance studies at the Brookings Institution, and recently served as executive director of the White House Office of Faith-based and Neighborhood Partnerships during the Obama administration. Hers was the second lecture in the Week Five Interfaith Lecture Series, themed “The Supreme Court and Religious Communities: Holding America Accountable?”

Rogers’ opening statements were inspired by the Rev. Martin Luther King’s sermon collection, Strength to Love, in which he discusses the religious person’s role in accordance with the government.

When religion remains separate, then, the nation is instead informally held accountable by basic doctrine like “justice and freedom for all … a recognition of equal and infinite worth of every human being.”

Rogers presented three ways she said the Constitution is clearly against the fusion of church and state. The first is the prohibition of a religious test for public office, as presented in the final clause in Article 6 of the Constitution.

“We can’t, if you will, baptize certain beliefs and require everybody who’s going to serve in government to hold to those beliefs,” Rogers said.

Religious communities’ job, she said, is to articulate their beliefs and subsequently ask for accountability in upholding them.

Secondly, Rogers said, it’s clear the Constitution calls for separation of church and state just by reading the first 16 words of the First Amendment: “Congress shall make no law respecting an establishment of religion, or prohibiting the free exercise thereof.” This is otherwise known as the Establishment Clause.

The government, she said, is not allowed to promote any advancement, denigration or preference of a particular religion.

“Put simply, this means that under our Constitution, there are no second-class faiths,” she said. “It’s well understood, many times, that the Establishment Clause protects people who are not religious and members of minority faiths.”

The establishment of a state religion would harm atheists, agnostics and minority faiths, Rogers said, and would even hurt the majority faiths.

“When the state backs faith, it’s always going to pick and choose among elements of that religion, and the elements that it finds helpful to the state’s agenda will be magnified,” Rogers said. “At the same time, elements of the faith that it finds not so helpful, maybe even bothersome, will be overlooked and even ignored.”

This is dangerous to all faiths.

“What happens through that process is we end up with a faith that looks like a funhouse version of an authentic faith,” she said. “It warps religion, makes it something different than it was and because of the state’s big megaphone, it actually crowds out the authentic expression of faith by others.”

Rogers quoted John Leland, an 18th-century American Baptist minister, who said experience shows the nation that the “fondness of magistrates to foster Christianity” is more harmful to faith than persecution.

“Barring government from promoting faith does not convert our nation’s public life into a religion-free zone,” Rogers said. “Instead, it creates space and freedom for individuals and nongovernmental organizations to promote their faith and beliefs as they wish. So contrary to what sometimes passes for conventional wisdom, the separation of church and state is not requiring religion to be removed from public square, placed behind the closed doors of a house of worship.”

For example, she said, the government is not able “to erect a display with the purpose of venerating the Ten Commandments,” but any individual or group has freedom of religious expression if they wish to do so.

Thirdly, the Constitution backs religious separation from state in its promise of free exercise of religion, Rogers said. America is meant to be the landing ground for any and all religious practices, whether individual- or community-based. Any mixing of religion and government should be voluntary.

Rogers said she has been encouraged by recent examples of faith-government collaboration. She used the example of medical missionaries Nancy Writebol and Kent Brantly, who in 2014 traveled to West Africa to treat Ebola victims. They ended up contracting the virus themselves.

“When the state backs faith, it’s always going to pick and choose among elements of that religion, and the elements that it finds helpful to the state’s agenda will be magnified,” Melissa Rogers said. “At the same time, elements of the faith that it finds not so helpful, maybe even bothersome, will be overlooked and even ignored.”

Brantly survived and reached out to Rogers, then an Obama administration official, via email to express his eagerness to meet the president and discuss how to combat the disease’s spread. Immediately after pictures of Brantly’s meeting with Obama surfaced in the media, Rogers said, Americans felt a call to action. Some donated money and some called for government support in educating West Africans about proper burial techniques, for example.

To Rogers, this shows the positive results of a voluntary collaboration rather than a required one.

“If a religious community volunteers to serve as a lapdog of a political party or a faction, we are not going to be independent,” she said. “When that happens, we forfeit religious prophetic voice, and it does incalculable damage to religion’s witness.”

Sometimes, when seeing the fruits of this labor, government officials may even change their minds.

“When religious communities do things like this, then they become independent, and when they become independent, they have credibility, and when they have credibility, they have influence, including on our nation’s public life,” Rogers said. “Influence can be used to promote justice and freedom for all, to extend mercy to those who suffer, to show solidarity with those who are suffering and marginalized and to bear one another’s burden and bind up one another’s wounds.”

The wounds are still open for refugee communities. Even though the president has a duty to protect the safety of the nation, Rogers believes America should continue the “robust tradition of welcoming refugees to our shores.” She has seen, firsthand, the “careful and onerous process” for admitting refugees into the country.

“Religious voices are calling us to remember that by definition, refugees are people with a well-founded fear of persecution for reasons of race, religion, nationality, political opinion or membership in a particular social group,” she said.

Leaders of religious communities have recently zeroed in on President Trump’s travel ban executive order, health care legislation and climate change policy as issues requiring their voices. On Monday 7,000 nuns from all 50 states and Washington, D.C., sent a letter to the Senate in the hopes it would reject any proposal repealing the Affordable Care Act or cutting Medicaid.

“Today, a growing number of faith groups around the world are coming together to insist that we have a duty to care for creation and to ensure that our children and grandchildren will be able to enjoy its beauty and to live safe and healthy lives,” Rogers said.

And lastly, religious leaders are standing up in the hopes that faith groups will be able to have a home base for worship without fear.

When religious communities do things like this, then they become independent, and when they become independent, they have credibility, and when they have credibility, they have influence, including on our nation’s public life,” Melissa Rogers said. “Influence can be used to promote justice and freedom for all, to extend mercy to those who suffer, to show solidarity with those who are suffering and marginalized and to bear one another’s burden and bind up one another’s wounds.”

Rogers told the story of one Bayonne, New Jersey, Muslim community that had since 2008 attempted to build a house of worship but was continually denied by the township. The proposed facility required similar variances as two other recently approved projects — but those were for Christian churches. The Justice Department is now reviewing the situation.

“Attack on any faith community must be treated as an attack on all religious communities, especially at a time of rising hate crimes and threats of violence because of their actual or perceived faith,” Rogers said. “We must join hands across faiths, across parties, across beliefs. We must insist that religious liberty simply doesn’t exist until every person can wear religious garb and attend their house of worship without fear.”

Some may say these changes can’t happen with a snap of the fingers.

“Of course, we won’t always be able to bend the moral arc of the universe toward justice right away, or perhaps even in our lifetimes in some cases,” she said. “But that does not mean our stands are not significant. It does not mean our marches are meaningless or our voices have been raised in vain, for we are bearing witness, and bearing witness is an act of faith.”

One of Rogers’ final statements drew from several biblical passages from the books of Hebrews, 2 Corinthians and Romans.

“Faith is the assurance of things hoped for, the conviction of things not seen,” she quoted. “We walk by faith, not by sight. Bearing witness matters; it’s always worthwhile.”