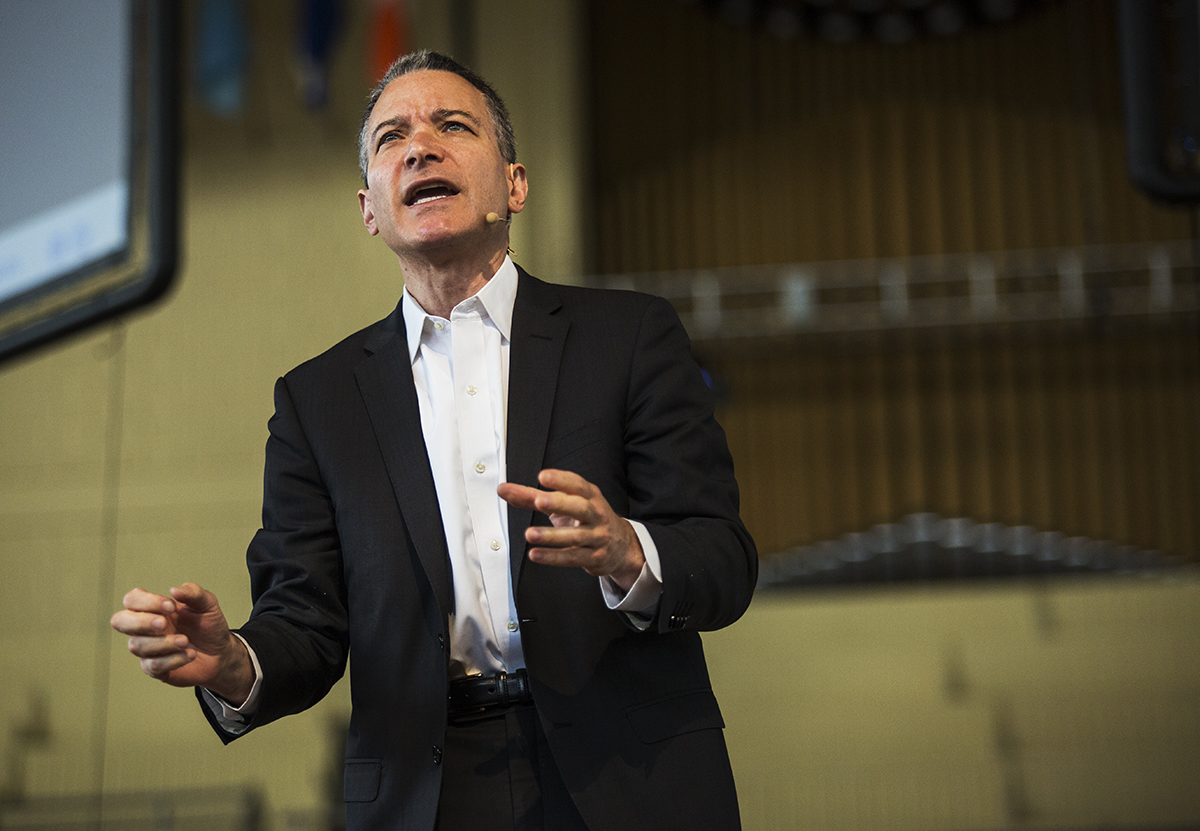 The year is 1763, and John Wilkes is a dissident against the state.

In secret, Wilkes has been printing pamphlets railing against King George III. The monarch issues a general warrant to uncover the anonymous critic, and his men then break into Wilkes’ home and seize personal documents.

Wilkes sues them and, in a turn of legal precedent that lays the groundwork for what will one day become the Fourth Amendment to the U.S. Constitution, wins. He is, the British court affirms, entitled to basic protections of personal privacy.

It is 2011, and Carpenter is suspected of involvement in a series of armed robberies. The FBI acquires magisterial approval to subpoena his cellphone’s geolocational data and uses that information to charge Carpenter with having aided and abetted a robbery.

Carpenter, too, protests the government’s warrantless breach of his personal information, and appeals to the Supreme Court. When the nine justices finally hear his petition, the conclusion they reach will determine the future of privacy in America.

The issues that these two cases touch on, though centuries apart, are similarly complex. Luckily, though, America has a guide with which to help pass judgement on just such questions.

Such was the question posed by Jeffrey Rosen as he spoke Wednesday morning in the Amphitheater. The president and CEO of the National Constitution Center, a nonpartisan organization chartered by Congress to inform people about its eponymous document, Rosen traced the history of privacy law — from Wilkes to Carpenter and onward — and what the Constitution has to say about it.

But opinions on a subject of this magnitude hold little water without a basis in facts.

“We will have to educate ourselves: about the text of the Fourth Amendment; about the historic cases that animated the framers and sparked the American Revolution; about what the Supreme Court has said in the past about the Fourth Amendment, and then how you translate that text and history and precedent to these unforeseen and exhilarating and difficult and vexing questions (about) the future of digital privacy,” Rosen said.

In pursuit of that aim, Rosen turned to a new tool that the center unveiled around a year ago: a digital Interactive Constitution with which one can trace the historical and legal nuances of America’s foundational document and its 27 amendments.

From it, he read to the audience the beginning of the Fourth Amendment.

“ ‘The right of the people to be secure in their persons, houses, papers, and effects, against unreasonable searches and seizures, shall not be violated,’ ” Rosen said. “That is the central text that we’re asking ourselves about, and the question is whether the seizure of my geolocational cellphone records without a search warrant is an unreasonable search and seizure of my persons, houses, papers or effects.”

The Constitutional basis of the debate laid bare, Rosen conducted a straw poll of Chautauquans’ sentiments. Votes were mixed, though visibly favored Carpenter’s pro-privacy side.

“Now we have to go to the history,” Rosen said. “What (were) the … cases that animated the framers of the Fourth Amendment when they wrote those beautiful words?”

Turning again to the Interactive Constitution, Rosen read off how “the primary concern(s) of the generation that ratified the Fourth Amendment were general warrants and writs of assistance” — the very “instruments of tyranny” through which Wilkes’ correspondences had been seized.

The question for 21st-century Americans, then, is this: “whether or not cellphone surveillance is or is not like the general warrants and writs of assistance.”

Compounded with that historical context, along with the legal text, is a third element: case law.

The standard throughout much of U.S. history was that “you needed physical trespass in order to trigger (the need for) a warrant.” It was under those conditions that, in 1928, the police tapped the phones of a suspected bootlegger and convicted him for violating the dictates of Prohibition.

“He objected that there was no valid warrant before the wiretaps were placed … (but) in a majority opinion, Chief Justice William Howard Taft disagreed” since there was no physical trespass, Rosen said.

But in a “visionary dissenting opinion,” Justice Louis Brandeis called for more broadly defined protection from surveillance. Anticipating now-modern technologies, like webcams, as well as devices that even today remain futuristic, like psychic “mind-reading technology,” Brandeis argued that physical trespass was not in and of itself necessary for one’s privacy to have been violated.

“At the time of the framing … a far smaller intrusion, the general warrants that sparked the American Revolution, were held to be unconscionable violations of liberty,” Rosen said, paraphrasing Brandeis. “Can it be … that the Constitution does not afford protection against similar invasions in light of new technologies?”

The Supreme Court eventually came around to Brandeis’ conclusion, but for very different reasons. The test became “whether people have a subjective expectation of privacy that society is prepared to accept as reasonable,” given the contemporary technological norms.

In the ’70s, cases like Smith v. Maryland expanded this metric such that when an individual gives private information over to a third party, as with a telecommunications provider, they surrender their expectation of privacy.

Other precedents, however, tend more toward increasing personal privacy.

United States v. Jones, a 2012 case which dealt with a GPS affixed to the car of a suspected drug dealer, unanimously found location tracking unconstitutional.

“Justice Sonia Sotomayor wrote a very important concurring opinion where she said, ‘We need to rethink this whole idea that when I surrender data to a third party I (lose my) expectation of privacy,’ ” Rosen said. “Basically she said, ‘We have to rethink those cases from the 1970s … because if those cases are taken seriously in an age when all of our most intimate documents … are stored on distributed third-party servers … basically we have no privacy.’ ”

In a similar case, Riley v. California, the justices unanimously rejected the government’s argument that police who arrested someone could have access to the contents of the arrestee’s cellphone.

“To open a cellphone without individualized suspicion would be like the general warrants that sparked the American Revolution,” Rosen said.

The audience now knowing “everything you need to make a very informed decision,” Rosen led them in another vote on the issue. Chautauquans were again mostly opposed to warrantless searches of cellphone records, although as Rosen noted, some (from both sides) had changed their minds.

One of the voters was Leon Sachs, visiting Chautauqua for his seventh year.

“I didn’t vote the first time because I just didn’t feel sufficiently informed,” Sachs said. “And now I feel like the magnitude of what we can observe with the digital technology so far exceeds what we could observe in the ’70s cases … that we’re not talking about the same thing.”

Rosen congratulated Sachs on his “epistemological humility,” but in a stroke of serendipity, Sachs had something else to add.

“He argued Smith v. Maryland,” Sachs said, pointing to the man to his right — his father, Stephen.

As it turned out, the elder Sachs was not only an audience member and a Chautauquan, but a former Maryland attorney general who won the landmark telecommunications privacy case Rosen had discussed earlier.

“This is astonishing!” Rosen said. “Smith v. Maryland … will determine the future of cellphone privacy, and whether or not the court overturns Smith will indeed shape the very nature of privacy in the digital age.”

And what of the forthcoming Carpenter case, which may do just that?

“Carpenter is a bridge too far,” Stephen Sachs said. Prompted by Rosen to elaborate, he added, “The world has changed. The digital age was not in play in Smith v. Maryland.”

“This should be relevant testimony to the Supreme Court justices,” Rosen said.

As the surprise interlude passed, Rosen moved to close out his talk.

“That was an example of a constitutional conversation at its best,” Rosen said. “And you saw what you need to do in order to make your informed decision about the case.”

Regardless of how the Supreme Court deals with these questions of digital privacy going forward — whether the justices use Carpenter to expand Fourth Amendment protections, as was the case with Wilkes (before the Fourth Amendment even existed), or narrow them, as Smith did — Rosen emphasized that the decision would be one rooted in the Constitution, not ideology.

“It’s a legal, and not a political, decision,” Rosen said.