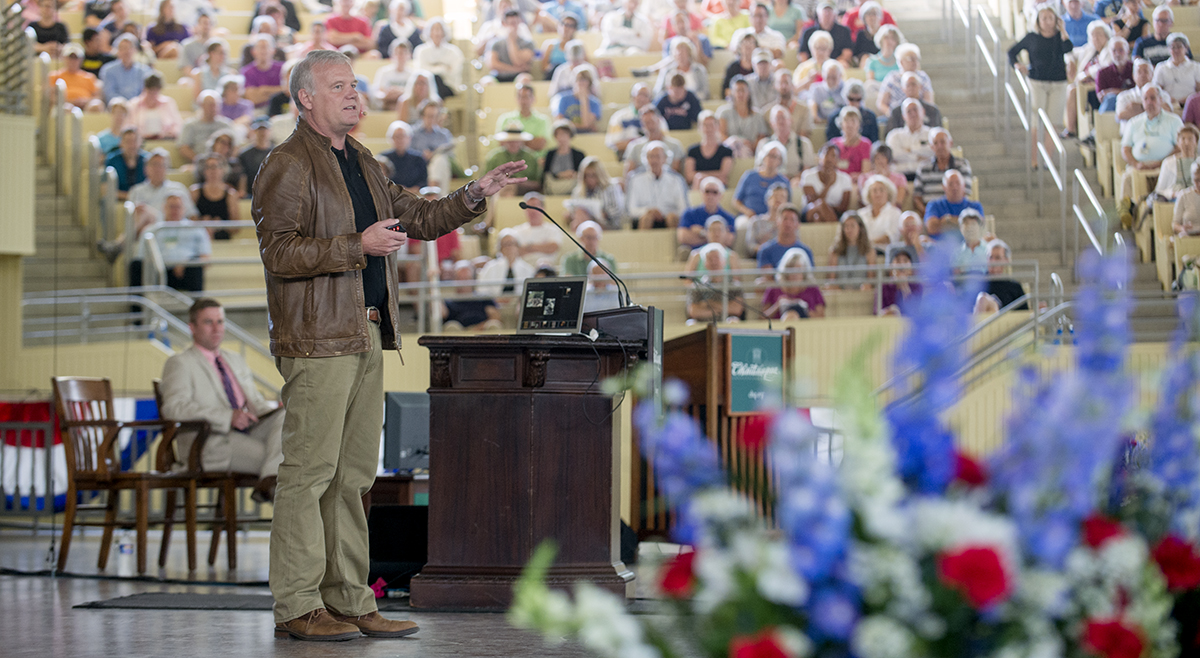 Paleoanthropologist and National Geographic Explorer-In-Residence Lee Berger delivers a lecture on his work studying and searching for human ancestors in Africa Monday, July 3, 2017 on the Amphitheater stage. DAVE MUNCH/PHOTO EDITOR

“I’m going to take you on a journey today,” Lee R. Berger told the audience at the start of his Monday morning lecture. As a paleoanthropologist whose discoveries have radically changed humanity’s understanding of its own origins, he knows a thing or two about journeys.

But all journeys must begin somewhere, and for Berger, that starting point was Africa in the late 1980s. It was there that, as a young paleoanthropologist, he faced the disquieting prospect of entering a field with a “99 percent chance of failure.”

“(Paleoanthropology) was probably one of the most difficult sciences in the world,” said Berger, a National Geographic explorer-in-residence, who opened Week Two: “The Human Journey: Origins, Exploration and Preservation.” “It was a science that was looking for the rarest, (most) sought-after objects on this planet: these fossils of ancient human ancestors.”

In fact, there were more scientists studying such fossils than there were fossils available to study. When told that East Africa, “the cradle of mankind” and a hotbed of the field, had no place for him, Berger instead did “the next best thing” and went to South Africa.

Despite the change of plans, Berger found success almost immediately.

“In my first year there … I discovered the first new fossil on that site in 48 years,” Berger said.

His find, two hominid teeth, was big enough to get featured in National Geographic. Encouraged, Berger “threw (himself) into this discovery,” searching for the next fossil.

“Oh, I found plenty of fossils; I found millions of fossils,” Berger said of that period. “Millions of antelope fossils.”

Despite failing to make any more major finds, Berger’s career continued to grow. He became chair of a university department and made several smaller discoveries that garnered him some academic recognition. Using the prize money from a National Geographic award, he bought NASA satellite images, powerful computers and GPS technology to help with the hunt for new fossil sites. He found four near Johannesburg, but they too lacked hominid remains.

By the 2000s, not only had Berger failed to make any more major discoveries, but the entire field of paleoanthropology was changing. Disillusioned by their odds of success, scientists had begun to replace exploration with “computer-driven analysis of the fossils that we already had.” Berger was replaced in his university position and entered an introspective period.

“When you are truly soul-searching and you truly want to know what your future holds, you search the internet,” Berger said.

That was how he discovered Google Earth. Using the program’s satellite imagery, he made a startling discovery: the GPS coordinates of the fossil sites he’d been searching at before, near Johannesburg, had been wrong.

“I had wasted three years of my life, and a ton of National Geographic’s money,” Berger said.

Yet it was not a total loss; the experience had made Berger skilled at identifying caves and fossil sites from satellite imagery. Intrigued by what looked like untouched sites in an already well-explored region, he set out in 2008 to see whether they actually existed.

Berger continued to use this method to explore out in the field. By June of that year, he’d discovered more than 700 new sites in “the most explored area.”

Eager to explore one of the sites, Berger set out with a postdoctoral student, his dog and his 9-year-old son Matthew. His son ran off into the tall grasses, and almost immediately told his dad that he’d found a fossil.

At first, Berger was skeptical it was anything, or at least anything other than another antelope fossil. Then, getting closer, he saw that it was in fact a hominid clavicle — a rare find in and of itself. And then he turned it over.

“There, sticking out of the backside of that, were dozens and dozens of … fossils,” Berger said. “This was not just any find —  a clavicle would’ve been enough — this was a partial skeleton of a hominid.”

Before the skeleton had been found, there were exactly seven others like it known to exist on the African continent. In that one site, Berger would eventually find, in total, six.

“My colleagues and I would name a new species in 2010: Australopithecus sediba,” Berger said. “And I was in scientific heaven.”

Berger and his team would go on to expand, build an on-site laboratory, and discover fossilized skin and hair (which “you should not find in a 2-million-year-old site”). But as his work moved away from actual exploration, he found himself “for the first time in five years with very little to do.”

Berger decided his next step was to explore underground, in the “Swiss cheese”-esque cave systems weaving beneath the savannah.

He and a former caving partner, Pedro Boshoff, recruited two young, thin local cavers who would be able to get into tight spaces the older explorers could not. The recruits, Steven Tucker and Rick Hunter, explored a number of caves in which no one else had ever set foot, but turned up nothing notable. Then, last of all, they went into the well-trodden Rising Star cave network, where Berger had initially wanted to start.

There, Tucker and Hunter found something that seemed to have gone unnoticed.

“They’re 150 feet underground, and they find a narrow set of cracked rocks, and they climb up them, about 60 feet, and then they stare down into a little crack,” Berger said. “It was 7 and a half inches wide.”

The two descended the narrow chimney, and at its bottom was a small chamber. Looking at the floor, they saw that it was littered with bones.

Berger at first didn’t believe the find was real, but photographs convinced him that Tucker and Hunter had found a skeleton, essentially just lying in the dirt. Berger secured funding to explore the site further, and a team descended back down into the chamber, led by his son Matthew, now 15.

Berger waited outside the mouth of the chimney until his son’s head popped out.

Berger organized a larger team that set up camp on-site, using cutting-edge technology to let Berger be in the bone chamber remotely while younger scientists went down into its depths and brought back out the millennia-old fossils.

“We had discovered more individual fossil remains in that little chamber than had been discovered in the entire history of the search for human origins in subequatorial Africa in the previous 90 years,” Berger said.

The fossils painted a picture of a thus-far unknown species, “a strange creature” with a primitive, orange-sized brain that seemed to contradict its other, more modern physiological characteristics. Berger’s team named it Homo naledi, meaning “star” in the Sotho language.

The bone chamber, too, presented a mystery, but the paleoanthropologists ultimately hypothesized that the Homo naledi had used it to “deliberately dispose of the dead.” Up until that point, such behavior had been thought to be exclusive to humans.

Since then, the findings of this site have been corroborated by a second, very similar site, announced only eight weeks ago.

Recent advances in dating the fossils have also changed scientists’ understanding of human origins, with the fossils evidently only 250,000 years old. If this chronology is accurate, then “our understanding of the origins of us and how (the naledi) are related to us have just become really messy and really, really complex.”

Scientific significance aside, the Homo naledi discovery also has larger implications for the human pursuit of knowledge more broadly.

“Remember that these discoveries were made in the most-explored area on planet Earth,” Berger said. “Together we can make this the greatest age of exploration.”