When the Cold War ended, space travel stalled. With less political pressure, the government gave NASA and other space-related organizations less money. This was understandable because the Earth had, and has, a whole host of other problems that need to be addressed.

But now, private companies are spurring on the space industry, though SpaceX and other groups do receive a lot of funding from the government.

“This time, unlike Apollo, where it was just the government, really, in a Cold War space race, we now have an ecosystem of economic actors that will help continue to propel this exciting period of space exploration forward,” said Ariel Ekblaw, founder and director of the MIT Space Exploration Initiative.

As director, Ekblaw charters annually recurring parabolic flights and suborbital and orbital launch opportunities and leads space-related research in multiple fields. At 10:30 a.m. Thursday, July 8 in the Amphitheater, Ekblaw discussed the initiative’s achievements and what they hope for the future; the historical and future politics surrounding space travel; and how she and others are collaborating to help democratize space. Her lecture, which was part of the Week Two Chautauqua Lecture Series theme of “New Frontiers: Exploring Today’s Unknowns,” came 10 years — almost to the hour — of the launch of NASA’s final manned Space Shuttle mission.

One of the initiative’s major goals is to build better space stations. Building the International Space Station required launching 27 rockets, and astronauts risked their lives to manually build the station while in space suits.

It was an “incredibly dangerous, incredibly exciting and a beautiful moment for those astronauts, but even this partnership between human labor and robotic arms — it won’t scale,” Ekblaw said.

To solve this problem, Ekblaw is helping design a self-building station, with highly magnetized, lightweight hexagonal and pentagonal tiles that are able to configure themselves into a breathable, livable area for humans.

This structure is called TESSERAE, short for Tessellated Electromagnetic Space Structures for the Exploration of Reconfigurable, Adaptive Environments.

“We are working on this opportunity to have you find delight and safety and comfort in the future of life in space,” Ekblaw said. “Can we take it from a domain where it’s just purely survival, building on the shoulders of giants here — NASA and others — who have made it possible to even consider a different paradigm, and go from surviving to thriving in a space exploration context?”

One of the major problems with current space stations is that their structures cannot change without major reconstructions. Billions of dollars are needed to send the material to space. This is a sharp contrast to cities and towns on Earth, which are constantly expanding and morphing. So for inspiration, Ekblaw and others looked to plants.

“There’s a certain logic, almost a fractal pattern, to each individual note and unit,” Ekblaw said, “but they also spiral in a way that you can predict and plan for where your space city might expand into.”

The structures made out of the magnetized tiles are able to assemble and disassemble all on their own. Ekblaw said the panels could one day be used to build larger concert halls or cathedrals. She showed one artist’s rendering of the structures connecting together to make a ring around the earth.

Ekblaw and the initiative are working to not only advance space architecture, but also bring about conversations concerning ethics. The initiative brings together over 50 graduate students, staff and faculty and fosters conversations with independent artists, CEOs and film directors to help create the next chapter of human space exploration.

“We’re not simply a design house or a speculative-fiction group thinking about futurism and technology,” Ekblaw said. “We’re building these prototypes, and we’re launching them.”

The initiative, she said, has over 40 projects it is developing, testing and sending into space. These projects involve all aspects of everyday life — from designing new bathrooms to creating new instruments.

“We think about musical instruments that (can) only be played while floating, so that we have this opportunity to design new artifacts for the unique culture of space exploration, rather than assuming that we will always simply carry up with us the artifacts from Earth’s culture,” Ekblaw said. “It’s a very interesting blank slate.”

TESSERAE has accomplished all of this in two and a half years. Ekblaw said this is largely because her team is not completely reliant on the government, while some groups wait for years to simply have their idea approved for funding.

But there are many problems along the way, now and in the future. NASA estimates that there are 27,000 traceable pieces of debris in space around the Earth, with the amount of debris too small to trace estimated to be many times that. This debris is mainly due to miscalculations of scientists and poses a large threat in a future where space travel is more regular. Now, the international community requires a review of the calculations of reentry on almost every mission to space.

In the future, when space travel becomes more regular, traffic may become a problem along routinely used routes. Another important issue is the security of satellites, with the machines ensuring communication between those on Earth, space and Mars.

As part of the Q-and-A session, Matt Ewalt, vice president and Emily and Richard Smucker Chair of Education, asked about China’s role in international space cooperation and about the prospect of another space race.

Ekblaw said that during the most tense parts of the Cold War, one of the only projects that the Soviet Union and U.S. collaborated on was space travel, with Americans flying on Mir Space Station and the U.S. bringing the Soviet Union into the early planning of the ISS. In the future, the same can happen, with many countries coming together for mutual benefits.

Ekblaw said one key difference between space programs in the United States and in China is that while NASA is, essentially, civilian scientists who communicate with scientists from other countries, China’s space program is more intertwined with the military and Communist Party.

“It can be difficult in that way to sometimes reach across the civilian-to-civilian conversation, but I think we need to do more of it and would look forward to opportunities to avoid a deeply militaristic race, if we can, for space,” Ekblaw said.

She would be disappointed if the tiles her team is working on break down and contribute to debris in space. She would also be sad if, in the future, outer space isn’t a peaceful place.

“It’s still an open question and takes a lot of our engagement to tell our government what we want, and also to engage with global citizens around that area,” Ekblaw said.

Ekblaw would be thrilled if the infrastructure helped people experience life in orbit.

“You can come back home, but (imagine being able to) share the magic of the cosmos with more people,” Ekblaw said. “You can imagine a yoga session; instead of sitting here on Earth, you are floating in a windowed, space habitat, truly immersed in the stars.” 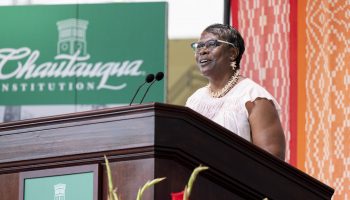