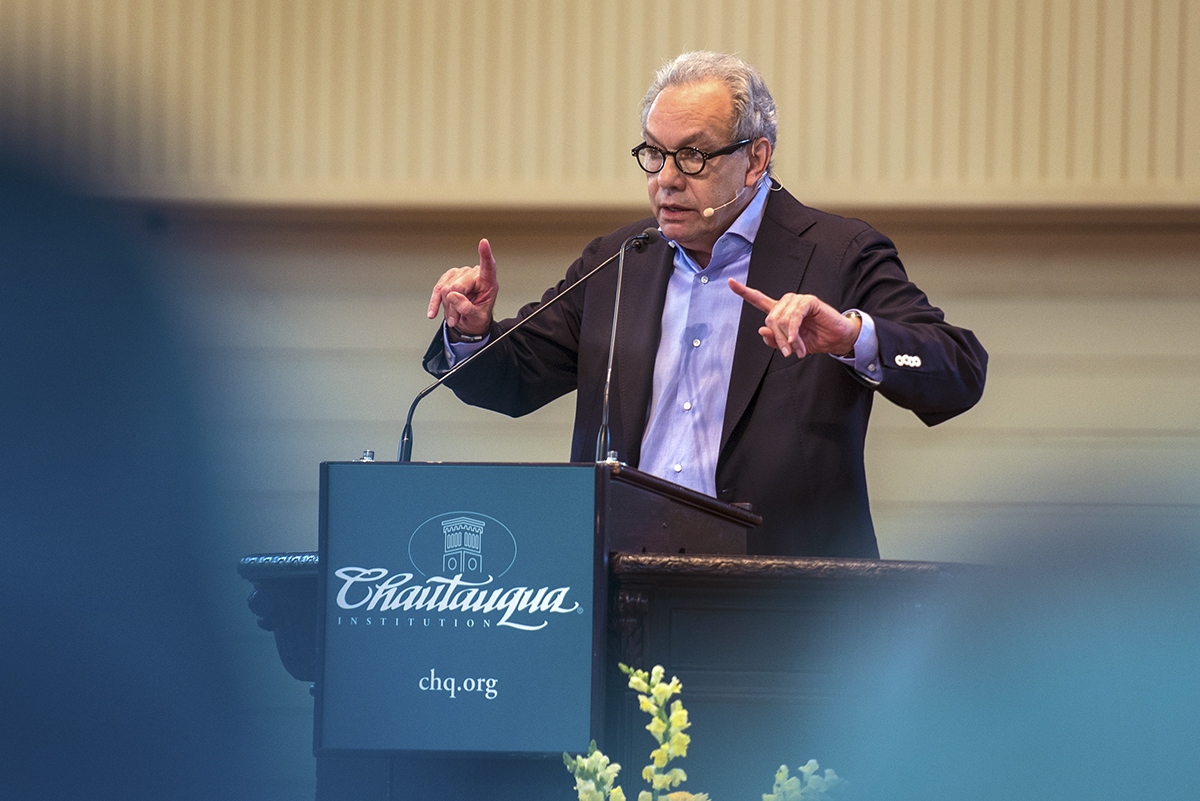 From disgusting comedy clubs to the prestigious White House Correspondents’ dinner, Lewis Black has stood on a lot of stages over the course of his career.

The Amphitheater podium from which he spoke Monday morning was different, though.

“I don’t know if you realize that what goes on here, now, is completely counter to what’s occurring in the country,” Black said.

“So you have to realize,” he continued, “that this, what you’re doing, is wrong.”

Opening Week Six: “Comedy and the Human Condition,” Black — the comedian, social critic and noted “king of rant” — dove straight into discussing the dichotomy between Chautauqua’s scholasticism and the rest of America’s insistent lack thereof.

“We’re having a great experiment in this country and I wish to God you’d be a part of it,” Black said. “We have tried as a nation to use our intelligence to better ourselves, and it just didn’t work. So we’re just experimenting with the concept of doing things ignorantly, as ignorantly as humanly possible. Sure, there’s a fact, but fuck!”

A moment later he added: “I didn’t want to use that bad word so quickly.”

It wouldn’t be the last time he did.

But if Black was angry, he had good reason to be.

Yoga and pilates, maybe. But joke-telling? Not so much. Other factors that get in the way of comedy: Heat — check. Daylight — check. Being outdoors — check, check, check.

Everything, Black seemed to suggest, that defines the Amphitheater.

The noise, though, was what really got him.

“Stand-up comedy is rooted in silence,” Black explained. “Silence; that’s where comedy has its roots. Not in sounds of birds or planes or children at play. Silence; that is where the chemistry of laughter begins. It is where the tension is formed that is ultimately released through the laugh. … Comedy, at its simplest, is tension relief.”

But worse than all those distractions, worse even than the noise, was the very thing that brought him to Chautauqua in the first place.

“There is nothing, and I mean nothing, less conducive to comedy,” Black said, “than talking about it.”

Yet here he was, doing just that. And standing in the same spot on which presidents and justices and Nobel laureates and journalists had once set their feet, Black said he was simultaneously honored and appalled to have been invited.

That this was Chautauqua’s first-ever comedy-themed week did not clear things up for him.

“Did the election depress you so much?” Black asked, to applause and laughter.

He paused a moment and stared as a woman led a young girl out of the audience, to more laughter.

“That’s the kind of thing you like to do, is to walk a 9-year-old out (of) your audience,” Black remarked.

Down two audience members, he returned to poking fun at those who remained.

“Look, if there was ever a place that was ripe for being made fun of, it’s here,” Black said, “where it’s so idyllic and precious that it can leave one mildly nauseous.”

“I can tell you, (I’m) developing a case of eczema and I’ve been here less than 24 hours,” he added.

But Black hadn’t taken the stage just to talk about Chautauqua; as counter to actual humor as he maintained it was, he had come to talk about comedy itself.

“So let’s talk about comedy,” Black said. “As I said, I have no desire to discuss its importance, its necessity, its ability to speak truth to power or how it can confront the most sensitive issues of our time, and in so doing, often testing what society identifies as offensive. Fuck!”

Instead, he spoke on what he knows: his personal experience as a comic. And a big part of that is that, even as a 68-year-old, audience members still come up to him and ask why he insists on swearing so much.

“Seriously — is it that unusual for a comic, who spends (his) entire life watching the gap widen between what this country is and what it really should be, to use words that help us express anger, frustration and rage?” Black asked. “These aren’t dirty words, these are words God gave adults to use. … When you read that Donald Trump won the election, did you go, ‘Oh, pshaw?’ ”

Another thing people say to him? That they’re funny, too, and could even be comedians themselves.

What is it that separates the professional comedian from the mere lay-funny-person?

Walking up to the edge of the stage, he gestured to the distance between himself and the front row of the audience.

“Stand-up comedy is rooted in silence,” Black explained. “Silence; that’s where comedy has its roots. Not in sounds of birds or planes or children at play. Silence; that is where the chemistry of laughter begins. It is where the tension is formed that is ultimately released through the laugh. … Comedy, at its simplest, is tension relief.”

And that critical gap is only part of it. Because in addition to the physical distance between entertainer and entertained, there’s also an experiential one, hewn from the years of time spent “wandering the country from one hellhole to the next,” facing humiliation over and over again in front of crowds of faceless strangers.

“In order to be a comic, you have to love dying on stage,” Black said. “Sure, they haven’t laughed; sure, they’re heckling me to the point of tears; but this one — this one’s really gonna get ’em.”

Only by failing time and time again, though, like a boxer with tied hands, can one figure out what’s actually funny.

“You learn through failure,” Black explained, before suddenly getting cut off by infantile wails from out in the audience.

“I knew there’d be a baby here,” he yelled. “And if you just gave birth, I want credit!”

Refocusing, Black questioned whether anyone exists without any sense of humor.

“Maybe the Amish,” he suggested. “I’ve always wondered about them. And who hasn’t?”

But getting (slightly) more serious, Black pointed to his experience teaching stand-up as evidence of the near-ubiquity of humor, even among people who don’t crack jokes for a paycheck.

“Everyone has at least one funny story to tell,” Black said. “And if you don’t, it’s time to get a new life.”

He continued, “Everyone that I’ve ever taught —”

Another interruption — a barking dog — gave him pause, but he trudged on.

After all, Black pointed out, nearly everyone finds something funny. And if they can laugh, they have a sense of humor.

“The reason I believe that … some people appear this way is that (their sense of humor) was never developed,” Black said. “I think one’s sense of humor is like a muscle. It’s a muscle that is usually exercised by family and friends, but rarely, if ever, is it exercised in the halls of academia.”

And as with any muscle, disuse leads it to atrophy.

Luckily for Black, he grew up with funny parents. Now 98 and 99, respectively, their senses of humor did and continue to inform his relationship with them.

As anecdotal evidence of this, Black recalled his father’s response to President Donald Trump’s election — “he laughed and laughed and kept laughing” — and his mother’s only having cooked the family a good meal once — to prove she “could really cook well if (she) wanted to … (but) just had better things to do.”

But they also influenced him in other ways. For instance, it was his father who introduced Black to Joseph Heller’s Catch-22, alongside Kurt Vonnegut’s Cat’s Cradle. The satirical novels gave him a new lease on life.

“Between these two books, I realized I wasn’t crazy,” Black said. “There was another way of looking at the world. They changed my perception of myself and the world I was living in.”

In a world where hiding under a school desk was the suggested recourse against  nuclear annihilation, it was a powerful sentiment.

“And so I learned not only what I found to be truly funny,” Black said. “I also learned, just because someone is in charge, it didn’t make them right.”

“They were like taking a drug,” Black said. “A drug that inoculated me from losing my mind.”

“In order to be a comic, you have to love dying on stage,” Black said. “Sure, they haven’t laughed; sure, they’re heckling me to the point of tears; but this one — this one’s really gonna get ’em.”

So, to return to exactly the sort of bigger-picture question about the nature of comedy that Black said he hated: Can comedy affect society?

What it and its spiritual successors do provide, however, is “insulation from the madness that we witness daily.”

It reminds one that “this too shall pass,” Black explained. “Hopefully.”

Amid the tide of political correctness and the inherently subjective nature of comedy, it can be difficult for Black to convey that message through his form of choice.

But given that he’s kept at it through all that, there must remain some value in the form.

“When all is said and done, I feel it is comedy that brings us together. … We like to and we want to laugh,” Black said. “And just what is a laugh? Well, it’s this mysterious music. I see laughter as a comic hiccup that allows us to stare into the abyss while we straddle the grave.”

In that sense, it is near-religious in nature. In comedy clubs as in houses of worship, people gather together to share a sense of transcendence, comfort and mystery.

And though Black was never much of a praying man, in comedy, he finds community.

“I don’t really enjoy praying with a lot of people,” Black said. “I love laughing with them.”