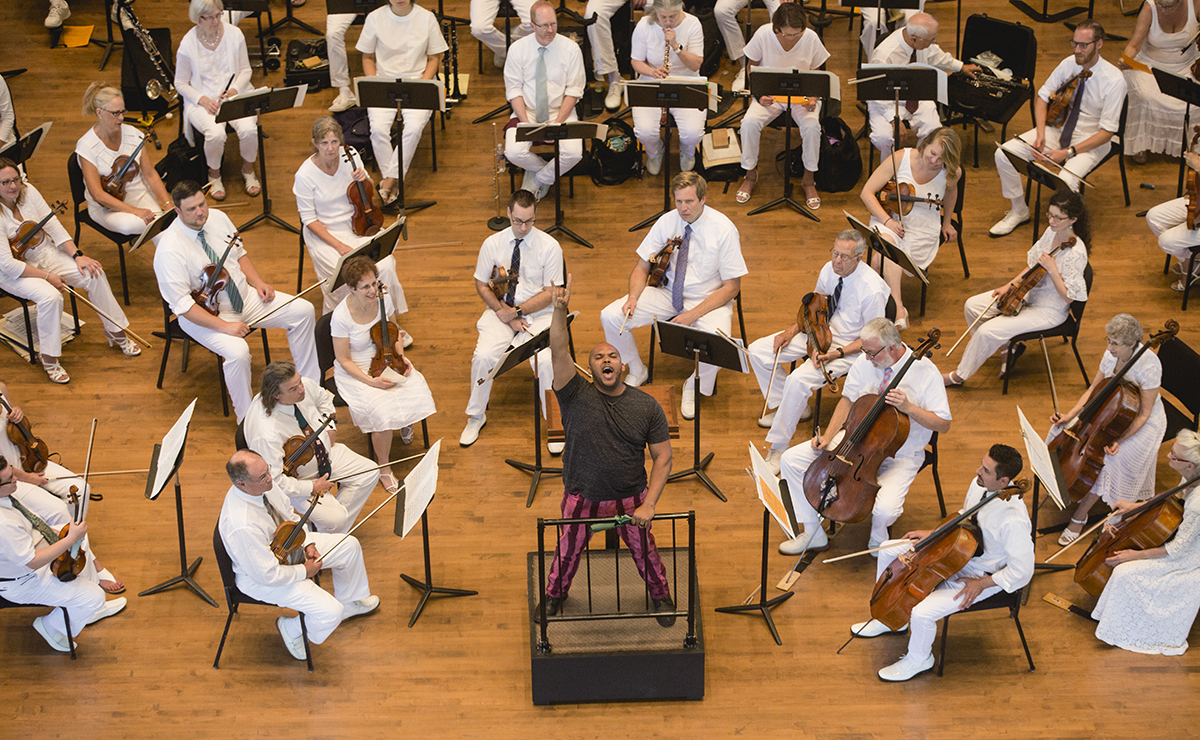 The future of the performing arts at Chautauqua is bright indeed, if the new Amphitheater is any barometer.

Moments after dignitaries cut a ceremonial ribbon Sunday, a battery of artists representing Chautauqua’s cultural community took to the stage, and before a full house put the newly rebuilt venue to a solid and joyful test.

This listener is pleased to report the Amphitheater passed, and with flying colors. Just as the redesign preserved the original venue’s look and feel, so does it also appear to have built on the acoustic. All that the grand old hall was before, it still is. Now, though, the sound is also balanced, full, and more vibrant.

The agent in charge of the test was the Chautauqua Symphony Orchestra. Under the sharp-eyed watch of music director Rossen Milanov, the newly reconvened ensemble put the new Amphitheater through its paces with excerpts from core works by Beethoven, Monteverdi and Tchaikovsky.

Beethoven was the most revealing. Between the composer’s “Consecration of the House” and the vocal finale of his “Choral” Symphony No. 9, the heir to Bach and Mozart proved the revitalized venue can handle anything, big or small.

Start where the hourlong program ended: with the big. Ordinarily, one might object to leaping right into the “Ode to Joy” portion of Beethoven’s Ninth. On this occasion, however, it made sense, and allowed the orchestra and Columbus Symphony Chorus to demonstrate the full scope of the hall’s majestic, resonant atmosphere.

It was the vocal equivalent of flooring the gas pedal on a new car. They got right down to business, and went zero to 60 in glorious fashion. The kicker? Two groups of children dancing, as if around a maypole, in true “Ode to Joy” spirit.

The “Consecration of the House” Overture was more like a quick cruise on the highway. Not only did the work itself suit the occasion and kick off the program beautifully, the regal, close-knit reading by Milanov and the CSO also made the point that for standard symphonic literature, the new Amphitheater is going to do just fine.

Same goes for brass music. Though exceedingly brief, the brilliant, reverberant performance of the Prelude (Fanfare) from Stravinsky’s “The Rake’s Progress” by an ensemble from Chautauqua’s Music School Festival Orchestra reminded listeners that for all its enormity, the Amphitheater is in fact an intimate space.

Opera and dance, too, are going to fare well, if Sunday’s “Special Arts Matinee” is any indication.

No more running out of room, for one thing. As they took their places to begin the Wedding Pas de Deux from Tchaikovsky’s “Sleeping Beauty,” Charlotte Ballet dancers Sarah Hayes Harkins and James Kopecky rose to view on an elevating platform spacious enough to suit their every need and more. They then went on to give an athletic, expressive performance in which the CSO was a central but never overpowering presence.

Neither did the space prove too much or too little for mezzo-soprano Heather Johnson and other artists from the Chautauqua Opera Company, in the Prologue from Monteverdi’s L’Orfeo. After Johnson easily filled the hall with poignant, shapely sound, her peers positioned throughout the venue stood and joined her in a haunting antiphonal chorus that simply had to be heard to be believed.

No less memorable was the rapturous performance of the wedding march from Mendelssohn’s “A Midsummer Night’s Dream” by pianist Alexander Gavrylyuk. The artistic adviser and artist-in-residence at Chautauqua’s Piano Program broke in the new space and earned a standing ovation with a dizzyingly virtuoso arrangement by Liszt and Horowitz, a giant tornado of notes through which the main theme somehow remained perfectly intact.

One art form didn’t quite thrive Sunday: theater. Specifically, the monologue “O for a Muse of Fire” from the prologue to Shakespeare’s Henry V. Chalk it up to his booming, too-rapid delivery or the hall’s acoustic, but the animated performance by conservatory actor Lavour Addison from the Chautauqua Theater Company essentially came off as a blur.

A few key words came across loud and clear, however. When Addison, playing the theatrical role of the chorus, pointed grandly to the stage and spoke of a “new, shining” scaffold (the original text is “unworthy”), he nearly got a round of applause. No one, clearly, minded the substitution. For new and shining the Amphitheater is, and ready now to serve Chautauqua well for what Shakespeare would call “the accomplishment of many years.”

Zachary Lewis is classical music and dance critic of The Plain Dealer in Cleveland, Ohio.

Steven Osgood focuses on the emotional in Masterclass